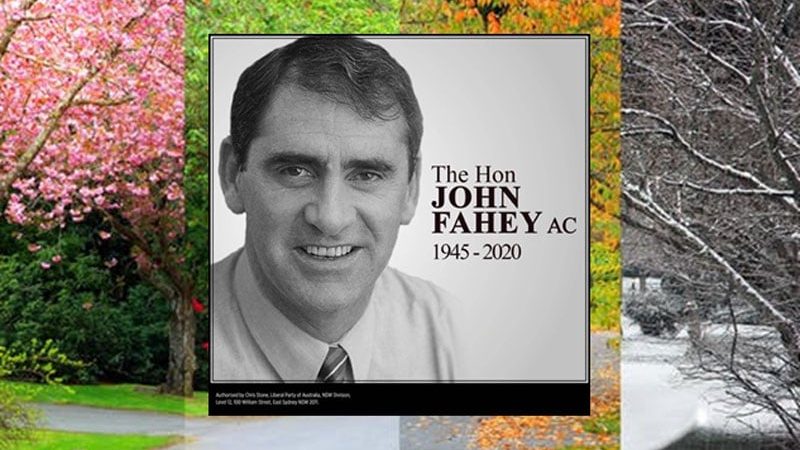 What’s the life of a man, any more than a leaf?
Man has his seasons, so why should he grieve?
Though all through his life he appears fine and gay
Like a leaf he must wither and soon fade away.

So runs the chorus of an English folk song that compares human life to a leaf changing with the seasons.[1] It seems rather fatalistic, with its promise of ageing and afflictions – the ‘frost’ after a relatively brief period of green. As bodily beings we are subject to change and decay, as John knew all too well.

But as so often with folk songs, there’s more going on here than first meets the ear.[2] Building on a thought that goes back to Homer, The Life of a Man was a popular Christmas song in the early days of the colony of New South Wales – though it makes no reference to Christmas and only religious allusion is to graves in a churchyard. Its insistence that “man has his seasons” resonated in England with the Christmas dream of light and warmth returning – hope not just for the natural world but for everyone cold of body or soul, hope even for the dead. On our side of the world, where Christmas comes in Summer, we too need cause for hope amidst bushfires and now pandemic.

The Life of a Man suggests that birth, maturing, ageing and dying are simply four seasons of a life-cycle that includes a golden autumn presaging a wintry death. Why grieve, it asks, if this richness is the shape of a life? Why grieve if, as Christians believe, death is but the season before the great blossoming?

Politics, sport and religion – the three passions of John Fahey’s public life – are considered impolite topics of conversation in some quarters. Indeed, Mark Twain wrote that in these matters “man’s reasoning powers are not above the monkey’s”.[3] And as Melanie told us in her message, they were precisely the three arenas in which John interrogated any suitor for Melanie’s hand…

What party do you vote for? John Fahey was a politician. A natural leader, he was known for his attention to detail, sheer hard work, and generosity in giving people his time. He loved a smoke, coffee and chat with friends or rivals, the mighty or more ordinary. In his youth he studied law in preparation for being a lawmaker. In his Summer he served in both the state and federal parliaments: in the one, rising quickly to Minister for Industrial Relations, Minister for Further Education and ultimately Premier; in the other, as Minister for Finance. In these roles he delivered significant infrastructure and reforms that still serve us today.[4]

In the Autumn of his life, John mentored younger politicians. He also put his experience of governance at the service of several community organisations and as Chancellor of the Australian Catholic University. Here I witnessed firsthand his passion for education inspired by faith and ideals, his pride in his University’s growth and achievements, and his determination to see it well-governed. Even in his dying days, he insisted on steering the appointment process for a new Vice-Chancellor.

What football team do you support? he asked. John Fahey was a man of sport. In his Spring he played for the Canterbury Bulldogs and coached. He said Rugby League, as much as Law, prepared him for the rough-and-tumble of politics. He famously applied his tackling skills to a would-be assassin of Prince Charles, and jumped with delight when Sydney won its bid for the Millennial Olympics. Then, in his golden Autumn, he lent his political nous to the sporting world as Chair or as a director of the Bradman Foundation, Rugby League Development Board, Olympic Park Authority and World Anti-Doping Agency.

What’s your religion? Behind all his contributions was a third fact about John Fahey: he was a man of faith. A friend of mine observed that in the media serious Catholics are described as ‘devout’ and serious Protestants as ‘staunch’; reporters have never encountered a devout Protestant or a staunch Catholic! So John was repeatedly labelled ‘a devout Catholic’ from ‘a devout Irish-Catholic’ family. Undoubtedly Jesus was indeed his way, truth and life (Jn 14:1-6). True to type, he had an uncle a priest, attended Catholic schools and even entered the Springwood seminary to train for the priesthood. But when on silent retreat towards the end of first year, he covertly listened to the radio and heard news of JFK’s assassination; unable to do anything or tell anyone, he realised his calling was to the world!

With Colleen it was love at first sight and they were married for 52 years, had three children and inherited two grandchildren to raise as well. Though not a Catholic when she married him, “Lady Col” joined John in making their home a true domestic church. Faith and family carried him through the highs and lows of public life, bereavement and cancer, and inspired his zeal for justice and integrity, his pro-life and pro-underdog stance, and his confidence about Australia’s future. Never one to check his conscience at the cloakroom before entering parliament or the public square, he sought in St Paul’s words today to focus his mind on “whatever is true, honourable and just, everything pure or commendable, all that is excellent and praiseworthy.” (Phil 4:6-9)

Amidst the hurly-burly of politics, John had a calm about him explained by the Rosary beads always in his hand or pocket and now on his coffin beside his treasured cross made of wood from Mary MacKillop’s first school. Prime Minister Scott Morrison remembers Premier Fahey, not just for his innocent antics on winning the Olympics bid, but also for his quiet faith as he knelt in this cathedral while fires ravaged New South Wales.[5] This humble, courageous, principled man had a soft heart to temper a hard head. In the Autumn of his life he was able to express that faith and charity more openly, in the Flying Doctor Service, Men of League and the Catholic University.

For his service to Church and community, I was privileged last year to bestow on John the highest ecclesiastical honour, the Knighthood Grand Cross of the Order of St Gregory. I joked that he could now bring his stead and sword into the cathedral! But John was to demonstrate a knight’s courage and ideals in a different way, as he struggled through leukaemia to a truly holy death on the eve of the 20th anniversary of his Olympics.

The folk song, The Life of a Man, captures something common to many religions: that, for a man like John Fahey, death is the culmination of a rich life of several chapters; if it involves some withering and dying, even that is not meaningless; death is part of the cycle but not necessarily the end. But that it is a gateway to “seeing God face-to-face” is, of course, a uniquely Christian take on death and captures three essentials of John Fahey’s faith: if we are to SEE after death, we must be resurrected in the flesh as Christ was, and not be mere ghosts, memories or photos; if we are to see GOD, who is pure spirit, He must be incarnate as Jesus Christ; and if WE are to see God, in the flesh, it is because that same Jesus redeemed us for “the communion of saints, the forgiveness of sins, the resurrection of the body and life ever-lasting”! Our life is not just four seasons of Spring, Summer, Autumn and Winter: there is a fifth season for us, by far the best, the eternal spring of Heaven.

John, today as we offer this State Memorial and Funeral Mass for you, we celebrate your faith and action, your many contributions to our community, and the baton of ideals you have passed on to us after running the good race. Now we commend you to the Lord of all seasons – parliamentary, sporting and liturgical – whom you loved so well, confident that He as we said has gone ahead to prepare a place for you (Jn 14:1-6).

I am pleased to invite the Honourable Nick Greiner AC, in whose government John served and whom he followed as Premier, to offer some words of remembrance.

I now invite the Honourable John Howard OM AC, in whose government John Fahey also served, to address us.

I now invite Senator the Honourable Marise Payne, to offer some words of eulogy.

My thanks to all who have contributed to this State Funeral and Pontifical Mass of Christian Burial for the Honourable John Fahey AC GCSG: those from the state Government who offered this state memorial service, from Protocol, from the Archdiocese of Sydney and especially St Mary’s Cathedral. Above all we thank you, Colleen and family, for sharing your beloved John with us so generously and for supporting him in his life of public service. Your Church, your government and your community are all indebted to him and proud to call him ours as well as yours. We will continue to pray for you.

Welcome to St. Mary’s Cathedral for the State Funeral and Pontifical Mass of Christian Burial for the Honourable John Joseph Fahey, Companion of the Order of Australia, Knight Grand Cross of the Order of St Gregory, 38th Premier of New South Wales, Federal Minister for Finance and, most recently, Chancellor of the Australian Catholic University – a truly great Australian, whose passing is mourned by all who knew him or of him.

I also welcome the Leader of the State Opposition, the Honourable Jodi McKay MP; the Secretary of the Department of Premier and Cabinet, Mr Tim Reardon; the Minister for Foreign Affairs, Senator the Honourable Marise Payne; and other past or present Ministers and Members of the State and Commonwealth Parliaments, along with party presidents and directors.

I recognise in particular John’s beloved wife Colleen, his two surviving children, Matthew and Melanie (whose lovely message we heard), and his grandchildren, Campbell and Amber whom John and Colleen raised after Tiffany, their mother, died in a car accident. Our sincere condolences to you all.

I salute the Emeritus Archbishop of Sydney, His Eminence George Cardinal Pell AC; the Dean of the Cathedral, the Very Reverend Father Don Richardson; the Vice-Chancellor of the Australian Catholic University, Professor Greg Craven; the President of the Australian Olympic Committee, Mr John Coates AC; along with representatives from the various authorities and community organisations which John led or served over many years.

Concelebrating with me this morning are: Reverend Father Bob Irwin MSC, Principal of Chevalier College, the family school; Reverend Fathers Anthony Casamento CSMA and Joseph Murphy who attended John in his dying days.

Because of public health restrictions, many of John’s colleagues, friends and admirers are joining us today by live-streaming. To everyone present, physically or virtually, a very warm welcome.