Our Coat of Arms

In heraldry, the term arms is used to describe the arrangement of symbols on a shield of arms which is the central element of a coat of arms or heraldic achievement.

The rules of heraldry (or law of arms) relating to clerics and ecclesiastical juridic persons are different in many respects from the rules relating to laymen and civil law bodies.

Shields of arms, both ecclesiastical and lay, are usually surrounded by external ornaments which identify the rank of the person and, sometimes, the nature of the institution whose arms they are. These external ornaments may change from time to time and are not an integral part of the arms although they are included in the term heraldic achievement.

For an Archdiocese, the external ornaments often, but not universally, used are a mitre preciosa with infulae on top of the shield and a crosier in saltire or a double transverse cross behind the shield. The use of these external ornaments is optional and inessential and is a matter of personal choice for each ordinary. 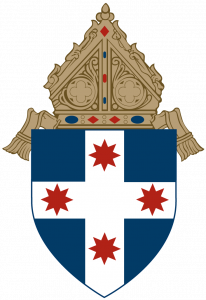 The blazon or technical description of the arms on the shield is: Azure (blue), on a cross argent (silver, shown as white) four eight pointed stars gules (red.)

The Colonial badge was immediately adopted into the Colonial (now State) flag and later formed the basis of the State arms of New South Wales which were granted and assigned in 1906.
It appears that the arms of the Archdiocese were designed by of for Archbishop Roger Vaughan but not adopted before his unexpected death on 17 August 1883. Archbishop Patrick Moran appears to have assumed the see arms on his arrival in 1884 by way of completion of Vaughan’s unimplemented plan.

Prepared by Richard d’Apice AM on behalf of the Catholic Archdiocese of Sydney, © February 2009