Most Rev Bishop Richard Umbers was born in Auckland, New Zealand on 17 March 1971 to Declan and Mary Umbers, the youngest of five children, brother to Anthony, Andrew, Gregory and Margaret and uncle to 8 nieces and nephews. 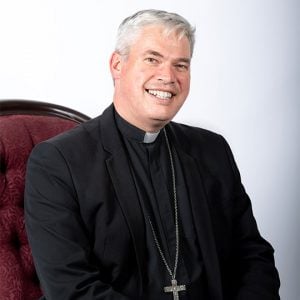 Bishop Richard entered the Opus Dei Seminary of Cavabianca, Rome in 1996 and studied at Santa Croce Pontifical University, Rome, achieving a Bachelor of Theology in 1999. Of his time in Rome, Bishop Richard says that one of his fondest memories is participating in a Eucharistic Procession with St John Paul II when he should have been studying for a liturgy exam.

Between 1999-2002, Bishop Richard studied at the University of Navarre, Spain where he received a Doctorate in Philosophy. On 14 February 2002, he was ordained a deacon and on 1 September 2002 a priest at the spectacular 11th Century Marian Shrine at Torrecuidad in northern Spain. Present at his ordination were his mother (who Bishop Richard says was so excited, she couldn’t sleep for a week), one of his brothers, his uncle Father Bob and Father Amin Abboud, the person who first invited Bishop Richard to think about becoming a priest.

Since 2003, Bishop Richard has worked pastorally as a school and university chaplain at a number of NSW colleges. He was chaplain of Warrane College, Redfield College, Creston College Kenvale College and the Nairana Study Centre, and says that the best thing about working with students is being able to discuss all manner of ideas with them.

He tutored and lectured in philosophy at the University of Notre Dame, Sydney between 2006 and 2013, and served as the spiritual adviser to the University’s St Thomas More Society. He was also a sought-after retreat master for high school and university students. As part of his engagement with students, Bishop Richard attended World Youth Day in Sydney in 2008 and in Krakow, Poland, in 2016. He went to World Youth Day in Manila in 1995 as a pilgrim. 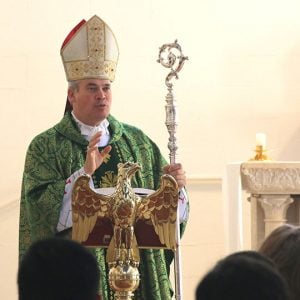 On 25 June 2016, Pope Francis appointed Bishop Richard as auxiliary bishop of Sydney and titular bishop of Thala in Tunisia. He was ordained as a bishop along with Bishop Anthony Randazzo on 24 August 2016 at St Mary’s Cathedral, Sydney.

Bishop Richard is widely published in the area of philosophy, regularly addresses youth gatherings, has a strong interest in social media and has a library of his own podcasts. He is proficient in Spanish, Italian and Latin.

In his spare time, our NZ-born Bishop is partial to watching a bit of “Netflux.”