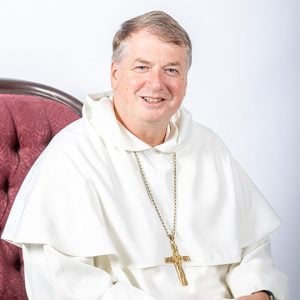 Archbishop Anthony Fisher OP was born in Sydney on 10 March 1960 to Colin and Gloria Fisher, the eldest of five children.  His father, Colin, a pharmacist, is of Anglo-Irish heritage and his mother, Gloria, grew up in China and the Philippines, with a Spanish-Basque father and an Egyptian-born (half-Italian, half-Romanian) mother.

He was baptised Anthony Colin Joseph Fisher at St Thérèse Catholic Church, Lakemba on 3 April 1960 by Father Cyril Hatton and attended the parish school in 1965 and 1966 before his family moved to the northern suburbs.  There, he attended St Michael’s Catholic Primary School, Lane Cove, Holy Cross College Ryde, and St Ignatius’ College Riverview.  He graduated from St Ignatius’ College in 1977 as dux of the school.

After graduating with first-class honours, Archbishop Fisher practised law at Clayton Utz in Sydney. He took leave from his legal job and backpacked around Europe to discern his vocation.

In 1985, Archbishop Fisher entered the Order of Preachers (Dominicans), a religious congregation dedicated to preaching the Catholic faith in the context of a life of study, prayer and community. He studied for the priesthood in Melbourne, receiving an honours degree in Theology from Yarra Theological Union.

He worked for a time on immigration and refugee issues at Uniya, a centre for social research in Kings Cross.

Archbishop Fisher made his perpetual vows for the Dominicans on 18 February 1987, and was ordained a priest at Holy Name Parish, Wahroonga, on 14 September 1991, by Bishop Eusebius Crawford OP.

Following his ordination, Archbishop Fisher completed a Doctorate in Bioethics at the University of Oxford on the subject of the just allocation of healthcare. From 1995 to 2000 he was a lecturer in the Australian Catholic University in Melbourne.

From 2000 to 2003 he was foundation Director of the John Paul II Institute for Marriage and the Family, Melbourne.  During this time he was also Master of Students (seminarians) in the Dominican Order and Socius (deputy) to the Provincial.

On 16 July 2003, Pope John Paul II appointed him Auxiliary Bishop of Sydney, and he was ordained a Bishop on 3 September 2003 alongside Bishop Julian Porteous, now Archbishop of Hobart.  Archbishop Fisher took “Speaking the truth in love” (Ephesians 4:15) as his Episcopal motto.

He was also Co-ordinator of World Youth Day 2008 in Sydney, the largest youth gathering and largest religious event in the history of Australia. 250,000 young pilgrims took part in the week-long festival of faith and more than 400,000 in the Final Mass with Pope Benedict XVI.

Since 2004, Archbishop Fisher has been an ordinary Member of the Pontifical Academy for Life, the body that advises the Church on bioethics.

On 8 January 2010, Pope Benedict XVI appointed then- Bishop Anthony the third Bishop of Parramatta and he was installed on 4 March 2010, just days before his 50th birthday.

As Bishop of Parramatta, he oversaw the consultations, publication and implementation of the Diocesan Pastoral Plan, Faith in Our Future. The pastoral plan set two basic goals for the Diocese of Parramatta: to grow our faith and to share our faith, focusing on five areas of greatest need and potential: families, youth, ethnicity, vocations and evangelisation.

Archbishop Fisher worked extensively with the Catholic Education Office, principals and staff on the mission and identity of Catholic schools, and with youth ministers and youth groups in promoting the connection of young people with the Church.

During his time as Bishop of Parramatta, Archbishop Fisher addressed pastoral letters to the priests and people of Parramatta on Confession (“Come back to Me with all your heart”, Lent 2011), Pastoral Planning (“Faith in Our Future”, Lent 2012), the Child Abuse Crisis (with the NSW Bishops, “Sowing in Tears”, Lent 2013), Personal Vocation (“Thy Kingdom Come”, Christ the King 2013) and the Eucharist (“This Wonderful Sacrament”, Corpus Christi 2014).

Following a significant increase in vocations to the priesthood in the Diocese of Parramatta, he directed the building of the new Seminary of the Holy Spirit at Harris Park. He also modernised the chancery, communications, professional standards and other aspects of the Diocese.

On 20 December 2011, Archbishop Fisher received the honorary degree Doctor of Laws from the University of Notre Dame Australia. 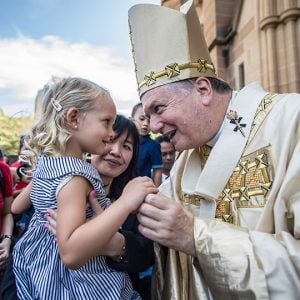 At his Installation Mass, Archbishop Fisher outlined his vision for the Church in Sydney:

“My hope is for a Church in which the Gospel is preached with joy, the wisdom of our tradition mined with fidelity, the sacraments celebrated with dignity and welcome, and the seminaries, convents and youth groups teeming with new life; a Church in which our parishes, chaplaincies and educational institutions are true centres of the new evangelisation, our laity theologically literate and spiritually well-formed, our outreach to the needy effective and growing, and God glorified above all.”

He also indicated he was keen to move forward in dealing with survivors of sexual abuse.  “I have personally found it harrowing as a bishop to listen to survivors tell me their stories, to hear how abandoned they felt and how they continue to suffer. To survivors of abuse and all affected I say: the Church is – I am – profoundly sorry for what happened. All young people must be cherished and protected. The Church can do better and I am committed to giving a lead in this area,” he said.

In November 2015, as a direct response to the violence and persecution facing millions of Syrian men, women and children, Archbishop Fisher launched the Syrian Refugee Appeal.  The appeal enabled the faithful in the Archdiocese of Sydney to make financial contributions, the appeal, offer low-cost accommodation, or contribute to local efforts aimed at welcoming refugees into the community.

In December 2015, Archbishop Fisher contracted Guillain-Barré Syndrome, a rare autoimmune disease, which resulted in him suffering temporary paralysis and being hospitalised for some months, followed by an intensive rehabilitation program.  Of this experience, Archbishop Fisher said:

“I really didn’t know if I was going to die.  At one stage I was fearful I would lose the ability to communicate, being conscious but able to move only my eyelashes. I don’t think faith solves all these crises when they come to people.  But I would say it was a huge help to me… whether I was going to die or live, or be permanently disabled or fully recover, that I would somehow still be in the hands of a loving God.”

He wrote a book on his experience of illness entitled “The Healing Peace of Christ: Reflections on Illness and Recovery, Death and New Life” (St Paul’s, 2017).

In 2017, Archbishop Fisher hosted the third Australian Catholic Youth Festival which drew 19,000 young people to the three-day festival of faith in Sydney. In October 2018 he was one of three Australian bishops participating the worldwide Synod of Bishops on Youth, Faith and Vocational Discernment. Following the Synod he was elected as a member of the Council of the Synod of Bishops.

In 2019, Pope Francis appointed Archbishop Fisher to the Congregation for Oriental Churches. The appointment involves specific dialogue with the Eastern Churches in Australia and across the world.

As Archbishop, he has directed a renovation of the evangelisation and youth ministries of the Archdiocese and work towards the reconfiguration and renewal of parishes and pastoral ministries known as “Parish 2020”. He initiated the Archdiocesan Anti-Slavery Taskforce to address the issue of trafficking and modern slavery today in Australia and beyond. He has been an active participant in the Sydney Catholic Business Network.

He has also played a key role in some moments of national mourning, hosting interfaith prayer services at St Mary’s Cathedral following the Lindt Cafe siege,the murder of Curtis Cheng and the Christchurch attacks in March 2019.

Through letters, lectures, preaching and diocesan projects he has addressed a wide range of questions such as: secularisation and religious liberty; the marginalisation and persecution of Christians; same-sex ‘marriage’ and gender ideology; sickness and suffering; homelessness; the identity, mission and funding of Catholic schools; euthanasia; the existence of God; business ethics; issues for young adults; and the seal of Confession.

Archbishop Fisher is Chancellor of the Catholic Institute of Sydney and a Member of the Company, Senator and Chair of the Board of Identity of the Australian Catholic University. He has published extensively in bioethics, moral theology, history, law and spirituality. His most recent books include: “Catholic Bioethics for a New Millennium” (Cambridge University Press, 2012); “The Healing Peace of Christ: Reflections on Illness and Recovery, Death and New Life” (St Paul’s, 2017); “War and Terror, Peace and Hope” (St Paul’s, 2018); and “My Dear Young Friend: Letters on Youth, Faith and Future” (St Paul’s, 2018). He has a popular weekly column in “The Catholic Weekly” and engages through Facebook and Twitter.

His community involvements have included being Chaplain to the Parliament of Victoria; member of the Infertility Treatment Authority of Victoria; member of several hospital ethics committees; and chaplain to various organisations such as the Order of Malta and the Order of the Holy Sepulchre. His hobbies include reading and writing, tennis and cooking.