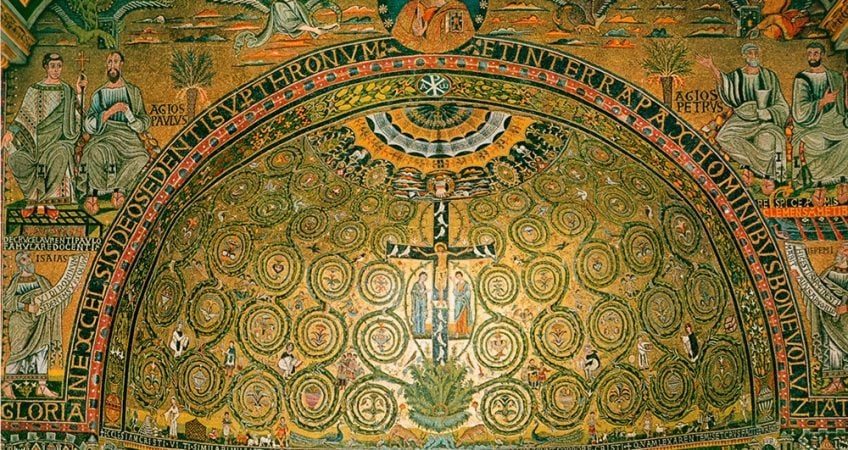 On Freedom, Autonomy and Responsibility in Catholic Education at Our Lady Seat of Wisdom Chapel, ACU North Sydney

We’re all familiar with crosses. They mark churches and hospitals, pharmacies and ambulances, firetrucks, blood banks, graves and more. One place we see this ubiquitous symbol is around the Australian Catholic University. But instead of two bare planks of wood, the ACU cross has trefoils on three limbs, as if it were flowering. The ‘cross fleury’ is not peculiar to ACU, of course: it was a common ancient and mediaeval device.

What’s that all about? Is it just ornamentation to make a confronting instrument of torture more suitable for necklaces and classrooms? One answer is that the three buds on the three arms represent the three persons of God, as all three were touched by the crucifixion: the Father who so loved the world He gave His only Son (Jn 3:16); the Son who took on our flesh to experience all we do, even our mortality (Jn 1:14,18); and the Spirit that the Son gave forth as He died upon the cross (Jn 19:30). But the trefoils are more than lumps: they are buds or leaves, and so signify life.

Tonight Jesus describes Himself as the True Vine, His disciples as branches, His Father as the vinedresser (Jn 15:1-8). As a branch, disconnected from its trunk, withers, so separated from Him Christians can do nothing. But grafted onto Him we bear fruit aplenty. To this end the divine gardener prunes us back from time to time. The fundamental Christian paradox is of growth from pruning, life from death, crops from seed dead and buried (Mk 8:35; Jn 12:24).

There is much to reflect upon here for the life of any university or school: the pruning ‘discipline’ of hard academic work and the gardening task of professor and tutor, as weeds of falsehood are uprooted and thorns of ignorance thrown on the fire, fostering instead flowers of new knowledge and fruits not just for the students but for all humanity to pick. But for a Catholic school or university there is more to consider than personal or even societal gain. Separated from Christ in its teaching, research, pastoral care, and other activities, the Catholic institution will bear rotten fruit or none; in Christ’s rather stark terms today, such branches are good-for-nothing and destined for the furnace. But if a Catholic college remains grafted to the True Vine it can expect excellent fruit.

Amongst the fleury or budded crosses of the middle ages, the cruz espada or sword-like cross of St James was the symbol of the mediaeval religious knights that protected pilgrims – in this case, on the way to Compostela rather than Jerusalem – and sought to retake the land from the Moors – in this case, the Iberian peninsula rather than the Holy Land. Our university cross might hint at such an aspiration: not for pugnacious graduates but for chivalrous ones in an age of manufactured outrage and social media discourtesy; not for cultural warriors necessarily, but at least for shapers of the culture rather than its dupes; not for religious fanatics so much as pilgrims open to the transcendent and searching. Pope Francis talks of a ‘Synodal’ Church, modelled on the pilgrims walking to Emmaus with Christ, searching, listening, pondering as the Lord’s words made their hearts burn. A Catholic college must be such a place.

Another fleury cross of medieval times was the cross of St Dominic with limbs flowering luxuriously with fleur de lis. It embellished many buildings in the first universities in Paris, Bologna, Oxford, Cambridge, Cologne and Salamanca to name a few. In those newborn academies the friars participated in philosophy and theology, the arts, sciences and professional disciplines. They filled teaching chairs and student desks. They left behind their batman capes to evolve into academic gowns. Associated with their flowering crosses was the Dominican motto, Veritas, the driving passion of the universities and schools, then and we hope still now. For the friars and their fellow scholars were not just wanderers searching for some ever-elusive treasure, nor like the Pontius Pilates of ancient Palestine and post-modernity who give up on the search for truth altogether. No, these guys would only seek so they could find, knock so the door would be opened to them (cf. Mt 7:7). Once they’d contemplated the truth they shared the fruits of that tree with others: contemplare et aliis tradere contemplata, as St Thomas Aquinas put it.

Which means there is an apostolic element to the life of the university told in the ACU cross. We don’t just learn for learning’s sake, worthy as that is. We don’t just learn for our own uses, necessary as that is also. No, we learn that we might teach, accumulate so as to share, study in order to transmit, add to what humanity knows and put it to service. Through Eastertide we read of early Church heroes passing on the faith like sparks spreading through the dry Australian scrub. Today Paul and Barnabas argue for a bigger enrolment, as it were (Acts 15:1-6). And their way of resolving matters was to become fundamental for a Catholic college: we gather together to contemplate and converse, that together we might discover what is true and good and beautiful. We share our little wisdom, and listen to others. We beg the assistance of divine wisdom also. We sharpen our opinions on each other’s. We maintain an atmosphere of curiosity and docility, civil debate and scholastic endeavour. And then we hit the road again, sharing what we’ve gained with the world.

Our conference focuses on the freedom and responsibility in Catholic education. The flowering cross reminds us what our students, academics and institutions should be free for and responsible to: free for Veritas, for discovering truth, not just preference or opinion; responsible to Veritas, for reverencing truth, for building up and passing truth on, not just storing greedily or sifting ideologically. And we discover that Truth with a capital-T is a Man who also God, who came as witness to the truth and called on the Father to consecrate us to the truth (Jn 18:37; 17:17).

If you go to Rome, after visiting St Peter’s and, of course, the Rome campus of the Australian Catholic University, a third highlight worthy of your attention is the Dominican church of St. Clemente, one of the true wonders of ancient, patristic, mediaeval and renaissance Rome. In the dome above the altar is an incredibly rich 12th-century mosaic of the Tree of the Cross become the Tree of Life, with luxurious shoots sprung from the tree in all directions, supporting abundant growth in Church and society, with branches for every kind of animal and vegetable life, and for all human activity, active and contemplative. There are several scholars amongst the foliage, each at his writing desk. A cruel and deadly cross that once stood on a hill in a backwater of the Roman Empire, now stands gloriously in the middle of Rome for all to see, a tree of new life for every young mind – and every older heart also.

INTRODUCTION TO MASS FOR AUSTRALIAN CATHOLIC UNIVERSITY CONFERENCE ON FREEDOM, AUTONOMY AND RESPONSIBILITY IN CATHOLIC EDUCATION

Welcome to our Mass to close the first day of the conference. I acknowledge concelebrating with me Most Rev. Peter Comensoli, Archbishop of Melbourne, Most Rev. Vincent Long, Bishop of Parramatta, Fr. Anthony Casamento CSMA, Vice-President of the University, and Fr. Friedrich Bechina FSO from the Congregation for Catholic Education. I also salute Vice-Chancellor Greg Craven, and other officials of this University, Ms Augusta Muthigani from the Kenyan Bishops Conference, and our other keynote speakers Professors Carozza, de Groof, Garnett, Moreland, Renshaw and Riondino. To our visitors from across the seas and everyone present from Catholic education, a very warm welcome!