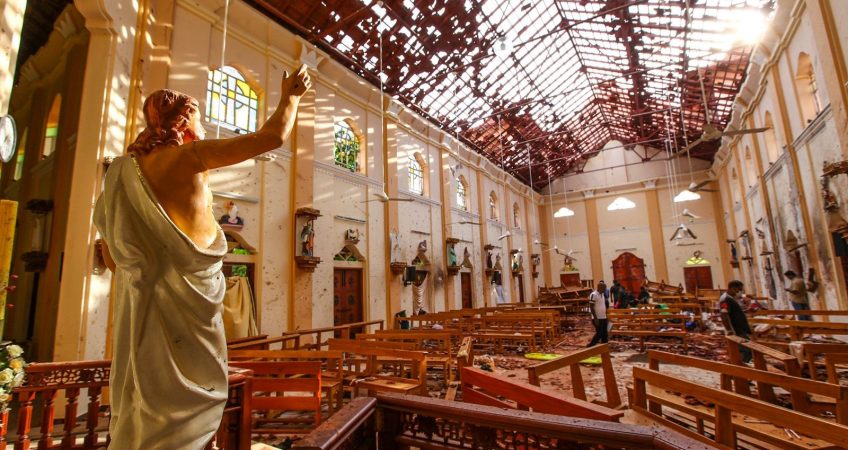 
Easter morning Mass was nearly over at St Sebastian’s Catholic Church in Katuwapitiya, Negombo. The congregation had heard the Gospel account of the first Easter, renewed their baptismal promises, been sprinkled with Easter water and received Holy Communion. Australians Manik Suriaaratchi and her 10-year-old daughter Alexendria were making their thanksgiving after Communion, when a ‘young and innocent looking’ suicide bomber entered the church and detonated his device.

A now blood-bespeckled statue of Jesus survived the blast, but many worshippers were not so lucky. Manik and Alex are dead; their husband-father Sudesh Kolonne survived.

Manik was a successful entrepreneur, founder of a business management company, with degrees in Aeronautical Engineering, Business and Commercial Law. She’d previously worked at NAB and Qantas. Friends describe her as a beautiful, ambitious, flamboyant person, a pious Catholic, industrious, helpful and visionary.

Young Alex was a cute, talkative ‘angel’ who loved music and dance.

The 253 or so who died, hundreds more who were injured, and many more who were endangered, by the blasts at St Sebastian’s, or at St Anthony’s Shrine in Colombo, Zion Church in Batticaloa, or one of the hotels, are more than a death toll. Each victim has a story. They were people just like us, engaged in acts of worship, of leisure or of civic duty. We mourn them as our brothers and sisters.

Places have their stories too. Most Sri Lankans are Buddhists: Christians and Muslims each make up less than a tenth of the population. Yet there is archaeological evidence of ‘Thomas Christians’ in Sri Lanka as early as the 5th century AD and from the 16th century onwards Christian missionaries such as St Joseph Vaz came in waves. Negombo is known locally as ‘Little Rome’ because of the sheer number of churches and faithful. Shrines to the Virgin Mary with arches decorated with coconuts are commonplace along the roads. The Renaissance-style church of St Sebastian was a centre of prayer for people of all faiths. Catholicism is widely regarded as a unifying force in Sri Lanka, because its worshippers include both Tamils and Sinhalese, its schools accommodate Buddhist, Muslim as well as Christian children, and its clinics care for all comers.

Before they died, Manik and Alex heard the readings for Easter morning Mass. The Acts of the Apostles records St Peter’s preaching about the life, death and resurrection of Jesus (Acts 10:34-43). He explained that the apostles were witnesses to all this; the prophets also; and that God charges Christians with giving such witness too. Three times Peter used the word martis μάρτυς or witness, the word from which we get our word martyr. Ironically, Manik, Alex and the others at that Mass were being warned that Christian faith demands a certain serious-ness, commitment, even heroism. That people can be persecuted for giving witness to their faith. That some might be called upon to give the witness of their blood.

But the Socratic wisdom that it is better to suffer evil than perpetrate it is our wisdom also. On that account there is no such thing as a suicide-martyr: martyrdom is something people may endure for their beliefs, at the hands of another, but no true martyr brings about their own death or that of bystanders. Suicide bombers blaspheme the holy name of God whose image their victims bear and who never condones violence against the innocent. They desecrate the bodies they kill, the ceremonies they interrupt, the holy places they damage. They maim and traumatize the survivors, their families and communities. And they add their own self-murder to the list of the atrocities that invite damnation.

It is still unclear who masterminded this outrage in Sri Lanka, but ISIS has claimed the ‘credit’ and the Sri Lankan government thinks it most likely that local militants acted with outside help. The motive is still unclear also, but officials have speculated that it was an act of jihad in retaliation for the Christchurch mosque attacks.

If payback is what it was about, it was terribly misdirected. It is far from clear that the Christchurch attacker had any religious motive. Manik, Alex and the others were no part of the terrible events in Christchurch and would, I am confident, have declared them evil, as I did at the time alongside the Grand Mufti of Australia. There is no history of Muslim-Christian animosity in Sri Lanka. There Christians are friends to their Muslim neighbours – and that, we pray, will continue.

For Easter is the story of God seeking to halt the endless cycle of human violence and recrimination. By allowing Himself to be made a scapegoat and reusing to respond to evil with evil, Jesus assumed to Himself all sin and hatred, nailing them to the tree, and empowering His followers to break free of the spirit of revenge that eats away at the human soul, relationships and communities. Easter offers not just the promise of resurrection from the darkness of the tomb in the life to come, but resurrection even now for dark hearts entombed in anger and reprisal.

In 2015 Pope Francis went to Colombo to canonize Sri Lanka’s first recognized saint, Joseph Vaz. A 17th century Goan missionary, he travelled throughout the island preaching the Gospel, bringing the sacraments, and caring for victims of smallpox in Kandy and elsewhere. He is credited with many miracles, including bringing rain during a drought and taming a rogue elephant! Pope Francis suggested that St Joseph Vaz “teaches us how to go out to the peripheries, to make Jesus Christ everywhere known and loved”, suffering persecution patiently rather than responding vengefully. “Because he was constantly united with the crucified Lord in prayer, he could become for all people a living icon of God’s mercy and reconciling love,” the Holy Father said.

What’s more, the Pope explained, St Joseph Vaz shows us the importance of transcending religious divisions in the service of peace. He praised the Church in Sri Lanka for “gladly and generously [serving] all members of society. She makes no distinction of race, creed, tribe, status or religion in the service she provides through her schools, hospitals, clinics, and many other charitable works.”

In exchange, the Holy Father said, all we ask is that our religious liberty be respected. “As the life of St Joseph Vaz teaches us, genuine worship of God bears fruit not in discrimination, hatred and violence, but in respect for the sacredness of life, respect for the dignity and freedom of others, and loving commitment to the welfare of all.”

While some leaders, editorialists and commentators are reluctant to name it, it is clear that the Easter Sunday bombers hated Christians. ISIS has called it a ‘blessed attack’ on a ‘blasphemous holiday’. According to Open Doors USA, every month “345 Christians are killed for faith-related reasons, 105 Churches and Christian buildings are burned or attacked, and 219 Christians are detained without trial, arrested, sentenced and imprisoned”. The respected Pew Research Centre says Christians are now the most targeted body of believers in 144 out of 198 countries. Of course, Muslims and other believers are harassed as well, as the terrible events in Christchurch remind us. Yet why can’t some commentators name what happened in Sri Lanka for what it was?

Tonight Manik, Alex and the others cry out to us from their new-dug graves, and from God’s right hand in heaven: no more violence in God’s name or man’s, no more hatred and reprisals. Let us affirm with these true martyrs that Easter is new life and hope for all.

Our Lady of Lanka and of Madhu, Queen of Peace – pray for us

St Joseph Vaz – pray for us

All martyrs of Sri Lanka – pray for us

Welcome to our Mass and Candlelight Vigil. We gather in this Easter week in the shadow of a terrorist tragedy – not the first or, I fear, the last – this time in Sri Lanka. In this Mass we commend to Almighty God the souls of the 253 or so people who died, many of whom were attending Easter Mass, and some of whom were relatives or friends of people here tonight. We ask for healing for the hundreds of survivors who were injured and traumatized, and for consolation for the grieving. And we intercede for peace and security for the Sri Lankan people, and indeed for people of every nation.

I acknowledge the presence today of the Consul-General for Sri Lanka, Lal Raj Wickrematunga and his assistants; members of families affected by the Easter Sunday bombings; and other Sri Lankan community leaders and members.

I recognize concelebrating with me His Excellency Most Rev. Antoine-Charbel Tarabay, Maronite Catholic Bishop of Australia; His Excellency, Most Rev. Robert Rabat, Melkite Catholic Eparch of Australia; Most Rev. Terry Brady and Most Rev. Tony Randazzo, Auxiliary Bishops of Sydney; Most Rev. Peter Ingham, Bishop Emeritus of Wollongong; the Episcopal Vicar for Immigration in the Archdiocese of Sydney, Very Rev. Isidore Anantharaj; Fr Lenard Ina, representing Bishop Casmoussa of the Syrian Catholics; Fr Chaminda Wanigasena, the Sri Lankan Catholic Chaplain; Fr Reginald Jayamaha from Wollongong; and my other brother priests.

Also present today are members of the chancery and agencies of the Archdiocese of Sydney, and representatives of the Anglican and Uniting Churches, and of the Salvation Army .

From the Buddhist community I welcome: Rev. Shigenobu Watanabe from the Hongwanji Mission; and Ven. Miao You from the Nan Tien Temple. And from other faiths: Rev. Pravrajika Gayatriprana from RSV Hindu Society of NSW; and Ida Walker from the Ba’Hai Community.