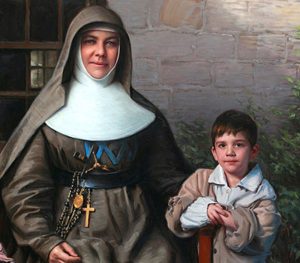 While most Australians know Mary MacKillop’s name, many are unaware of exactly what she achieved in her lifetime nor why this humble but determined Melbourne born nun is set to become Australia’s first-ever saint.

Not only was Mary MacKillop the cofounder of the Josephites, the Sisters of St Joseph of the Sacred Heart but under her guidance the Order she established schools for the poor and underprivileged in SA and later across Victoria and Sydney. She and her sisters were also responsible for setting up orphanages and homes for the destitute as well as establishing refuges for ex-inmates of Australia’s grim Nineteenth Century prisons and shelters for former prostitutes.

In a world of strait-laced Victorians as well as a male-dominated Church, Mary MacKillop’s unwavering devotion to those on the margins of society met with considerable opposition. The antagonism to what she was trying to achieve came not only from the general public but from many of Australia’s Irish-born Bishops and the Church itself. But with her strength of faith in God and her vision for a better world for all, Mary MacKillop refused to be daunted.

With patience, a forgiving heart and trust in God, she managed to overcome all obstacles, and 100 years after her death continues to be an inspiration and role model, not only for Catholics everywhere but for all Australians.

Born in Brunswick Street, Fitzroy in Melbourne in1842, Mary was the eldest of eight children, the daughter of Scottish-born immigrants Alexander and Flora MacKillop. The son of prosperous parents, Alexander had studied for the priesthood in Rome but due to ill health had been unable to continue was his studies. Returning to Scotland he sailed for Australia with his parents. In Melbourne he met and married fellow Scot, Flora McDonald but unlike his father, Alexander was financially inept and his family was often without a home and had to frequently rely on the generosity of friends and relatives.

Well-schooled himself, Mary’s father however was a strong believer in education and when Mary’s education at private schools had to be abandoned after he lost all his savings in a failed venture, he took over as her teacher and chief educator.

A brilliant horsewoman and teacher

From an early age, Mary was very much the mainstay of the family. Kind, patient and mature beyond her years, she had an instinctive compassion and selflessness. At just four years of age, noticing her mother flagging with tiredness as they clambered up a hill, she offered her arm in assistance. At eight, Mary was caring for five younger brothers and sisters who regarded her as their second mother. By the time she was 10 she had taken over the care of Flora’s latest newborn when the nurse employed to help with the family turned out to be a drinker.

Joining the workforce at 16 to help with the upkeep of her large and destitute family, Mary quickly proved herself as a hard worker and her employees, Sands and Kenny (now Sands & MacDougall), a printing and stationary company paid her a forewoman’s salary and clearly gave her considerable responsibility and trust.

A year or two later, offered the job of a governess to her cousins at her Uncle Cameron’s extensive property at Penola in South Australia, teenage Mary showed her aptitude not only as a teacher but as a horsewoman. Having inherited her mother’s skills with horses, she could handle virtually any mount, no matter how frisky, and frequently helped out with the cattle roundups.

In Penola, Mary cared for a young Aboriginal whose father worked on the station and whose mother had gone “walkabout.” Distressed at the little girl’s neglected condition, Mary washed her, treated her sores, shampooed her hair and gave her religious instruction, convinced that everyone had a right to be accepted and valued, regardless of their position in society or their wealth – or lack of it.

At 19, Mary met Father Julian Tenison Woods who was in charge of the Penola Parish. . A talented missionary, musician, writer, scientist and lecturer, Fr Julian and Mary had similar ideas and she was eager to enlist when he told her he needed help with the religious education of children in the Outback. But with her family in Melbourne still dependent on her income, she reluctantly had to turn him down. The pair, remained friendly however, and in 1866 founded the Sisters of Joseph of the Sacred Heart.

With a mission to live in poverty and provide Catholic education to the children of the poor and needy as well as extending “an all-embracing charity” to the underprivileged and indigent, the Order was unlike any other and the first “Australian-made” congregation of its kind. Unconstrained by normal convent strictures which were customary in Ireland and adopted by Church leaders in Australia, Mary and the Sisters of Joseph obtained Papal approval to move freely from diocese to diocese with Mary rather than a Bishop of the local diocese having control of the Sisters or their work.

As the fledgling Order’s first member and its Mother Superior, Mary took a vow of poverty, and donning a simple brown habit opened her first school on March 19. 1866 in Penola in a disused stable.

On hearing of her work, other young women joined her and became Sisters of the Order. Within 12 months, their work was so well known that the newly-arrived Bishop of Adelaide, Irish-born Bishop Laurence Sheil, who had appointed Fr Julian Director General of Catholic Education for the Diocese, asked Mary and her Sisters to open a school in Adelaide.

Over the next four years, Mary and the Sisters of Joseph founded 35 schools in the State as well as an orphanage, women’s refuge and House of Providence for the homeless and abused. Instead of being praised for her work, the Bishop and Church leaders in Adelaide were upset by Mary’s independence and the fact she and her Order did not fall under their control.

Fiercely conservative, they also objected to the Josephites vow of poverty and practice of begging to fund their schools, shelters and orphanages.

In a bid to bring Mary and her Order to heel, Bishop Sheil attempted to wrest control and when she resisted, he had excommunicated and thrown out of the Church for alleged insubordination. He then attempted to disband the Sisters.

Devastated, 29-year-old Mary prayed to God, convinced her trust and belief in the Lord would sort out this terrible turn of events. Her certainty in God’s help was not misplaced and within five months, Bishop Sheil realised his error, retracted his statements and Mary’s membership of the Church restored.

Sheil died nine days later, but Mary who harboured no grudges and never blamed the Bishop or Church for their actions either by word or in her writings, nevertheless wass taking no chances and in 1873 she travelled to Rome to seek Papal approval in person for the Order.

Pope Pius IX was impressed with Mary’s intelligence and determination and the young woman used her time in Europe to travel widely studying educational methods before rerturning to Australia where under her direction, the Josephites expanded their work, establishing schools throughout New South Wales and New Zealand.

Elected Superior General of the Order in 1875, Mary relocated to Sydney eight years later, establishing the Sisters of Joseph’s Mother House at North Sydney. But it wasn’t until 1888, 22 years after she had founded the Josephites that final approval of the Order was given by Pope Leo XIII.

Travelling extensively throughout Australasia throughout the following decade, she founded convents, charitable institutions and free schools for children at a time when almost everyone had to pay for an education.

Filled with affection and a deep love of children, Mary MacKillop radiated warmth and had boundless energy. Charismatic, she literally could light up a room and she became in inspiration to almost everyone she met with her piety, humility and love of life.

But in 1901, aged 59, she suffered a stroke while visiting Rotorua in New Zealand. Although she retained her mental acuity and vitality, she was now an invalid. Returning to Australia, she spent the remaining years of her life in Sydney.

“I Have Assisted at the Deathbed of a Saint”

Shortly before her death, she was visited by the Archbishop of Sydney, Cardinal Moran who said on leaving: “I consider this day to have assisted at the deathbed of a saint.”

Mary MacKillop, Mother Mary of the Cross, died on Sunday August 8, 1909. Her funeral was held at St Mary’s Catholic Church on Miller Street, North Sydney and attended by an enormous crowd. Four years later in 1913, the Mary MacKillop Memorial Chapel was built and now houses her Tomb. It was here that Pope John Paul II prayed on his visit to Australia in 1995 shortly after announcing the Beatification of Mary MacKillop which is one of the stages towards Sainthood.
On his visit to Sydney in 2008, Pope Benedict XVI also visited the Tomb of Blessed Mary MacKillop and described the selfless determined Australian as “one of the most outstanding figures” in the nation’s history, praising her for her perseverance in the face of adversity and for her pleas for justice on behalf of the unfairly treated.

“She was a practical example of holiness.”

For Canonisation, two miracles must be investigated and confirmed by the Vatican.

Mary MacKillop’s first miracle, which has already been confirmed by the Church, occurred in the 1960s when a woman with leukaemia was given only a few months to live. However when she asked the Sisters of St Joseph to pray to Mary MacKillop on her behalf and was given a relic of Mary’s to wear, against all odds she recovered.

The second miracle, now awaiting confirmation, concerns a woman with inoperable lung cancer and secondaries to the brain. Sent home to die, her family prayed to Mary MacKillop and not only did the woman recover but when she saw her doctors all traces of the cancer had gone.

It is hoped that final word from Rome pronouncing Mary MacKillop a Saint will occur in this, the Centenary Year of the death. However Sr Judith Sippel, Project Manager of the Canonisation Committee at the Sisters of Joseph’s Congregational Administration Centre at North Sydney warns that canonisation can be a long process. However, she has no doubts that Mary MacKillop will become a Saint.

“One of the best things about this Centenary year is that it has given us a chance to tell the community about Mary MacKillop’s life and help them understand what holiness and canonisation means, and why it is such as wonderful thing for us as a nation,” says Sr Sippel.

Today the Sisters of Joseph are found worldwide working with the poor and in education not just across Australia and New Zealand but in such far flung nations as East Timor, Peru, Canada, Scotland, Brazil and overseeing refugee camps in Uganda and Thailand.

To find out more about Mary MacKillop and her centenary year, log on to www.sosj.org.au