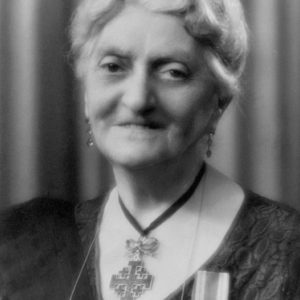 Barlow had come to Australia from Ireland in 1884 for what was originally intended as a short family visit. She was connected by both blood and marriage to Sydney’s close-knit Catholic “aristocracy” which was based on professional, commercial and political success. It was from this group that the leaders of such Catholic organisations as the committee of the Cathedral building fund, St Vincent de Paul, the Knights of the Southern Cross and the nascent Catholic Women’s Association were drawn.

Barlow perceived that the strength of the CWA would lie in its social activities, mixed with a judicious proportion of “good works,” with everything under the firm control of the Executive. She also knew how to court the patronage of the Sydney clergy and hierarchy, without succumbing to them. Guided by her charm, authority and strength of purpose, the CWA survived the vicissitudes of war, epidemic and financial crises.

In 1917, Barlow became the president of the CWA and was made Life-President by Archbishop Kelly in September 1918, a move which gave her enormous influence on the policy and direction of the CWA. When she died in 1934 she had marked the CWA indelibly with the stamp of her personality, insisting that it never took any stand on political issues but sought to respond to the social and welfare needs of the local Catholic community.

Dame Mary was awarded the medal Bene Merenti in 1922 and the cross and star of the Knightly Order of the Holy Sepulchre in 1929. She was renowned for her strong and effective leadership.