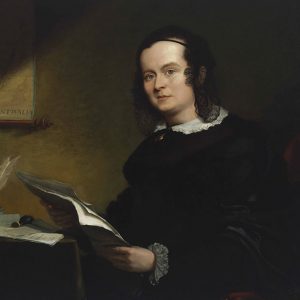 Caroline Chisholm was born at Northampton, 30 May 1808, and died in London, 25 March 1877, and yet regarded Australia as her adopted land.

She eased the path of thousands of migrants in this their new homeland. Her special concern for homeless girls and poor families during Australia’s formative years caused her contemporaries to see her as ‘the indispensable woman of the time’.

In Victoria her Shelter Sheds provided cheap and safe accommodation on the road to the Castlemaine Goldfields.

Caroline Chisholm may be described as a Christian humanist. She was inspired at once by the command ‘Love thy neighbour’ and the warm human sympathy of her own nature. Her sense of the worth of every human being prevented any trace of condescension or discrimination in her work. Charity, she said, should reach out to all creatures, ‘as long as they bear the stamp of humanity.’

She felt her work had been given her to do ‘by One who never allows his servants to stand still for want of materials’. To it she brought all her gifts of heart and intellect, and earned the gratitude of the Australian people.

For thirty years she worked to assist single women and families to migrate and settle in Australia. The idealistic and religious fervour for which she is now admired made her then a target for sectarian suspicion which added to the many difficulties she had to overcome.

She had to contend with the primitive conditions of a colonial society and a bitter religious controversy. She was handicapped by lack of material resources, but she had great personal assets. She had energy, human sympathy, administrative ability of a high order, personal charm and dignity, a husband unobtrusively devoted to her work, and undying faith in the cause to which she had so unselfishly put her hand.

Caroline Chisholm was a great pioneer, the greatest of women pioneers in the history of Australia and yet she died in poverty and obscurity.