Homily for the Solemn Pontifical Requiem Mass for His Holiness, Pope Benedict XVI 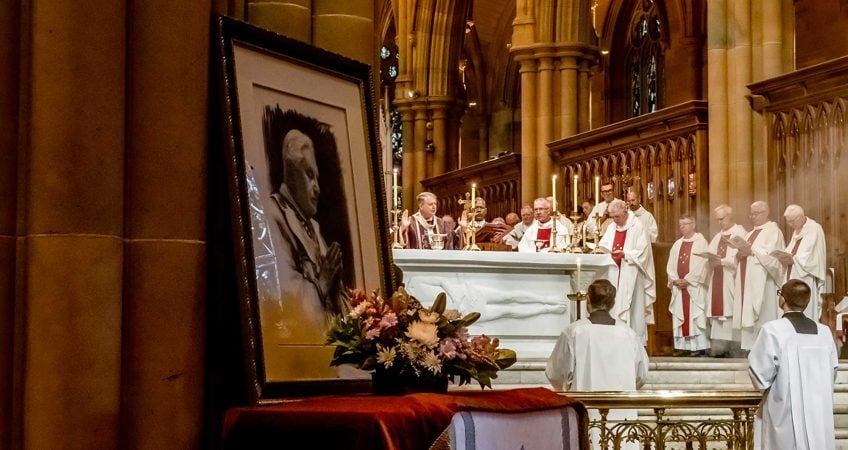 Abraham, Isaac, Jacob and his sons, all were keepers of sheep; Abel, Moses and David were also.[1] Like his ancestor Jacob, David called the Lord his ‘Shepherd’, and some of the prophets followed suit.[2] While Israel’s leaders often proved to be poor shepherds,[3] God promised them better ones, shepherds after His own heart (Jer 3:15; 23:4; Mic 7:14).

Jesus was the fulfilment of this promise. When He saw we were “like sheep without a shepherd”, lost, scattered and prey to “wolves” (Mt 9:36; 10:6; 26:31; Jn 10:1), He felt compassion and determined to be a Good Shepherd who knows, leads and cares for us (Jn 10:2-18). He said He’d willingly leave the 99 to save one lost sheep and even lay down His life for them (Mt 10:6; 18:10-12; Lk 15:1-6; Jn ch 10). Good shepherds offer the kind of leadership and care Christ gave and appointed the Church’s pastors to continue. Their selfless love mediates the outpouring of divine love that creates the world and redeems it.

Today’s Gospel (Jn 21:15-19) records Jesus’ last teaching on what it is to be a pastor in four distinct moments. First, He invites Peter’s three professions of love, counter-balancing his three denials before the crucifixion (Mt 26:31-35,69-75 et par.). Secondly, He renews His charge to Peter to be a good shepherd in leading and teaching, a rock of the Church, proclaiming Christ, uniting and confirming the brethren.[4] Third, he gives him a premonition of what this loving and leading would entail: he’ll be taken where he’d rather not go, for the cross awaits all who give witness to Christ. Finally, reprising Simon’s original call at the Sea of Galilee (Mt 4:18-19 et par.), Jesus says “follow me”: to lead, the Pope must be a faithful disciple himself.

The 265th successor of Peter responded to those same four dimensions of being a chief pastor—as disciple, witness, teacher and lover. Benedict XVI was, before all else, a follower of Jesus: preaching in this very cathedral on 19 July 2008, he reminded us that, like the new altar he was consecrating, “we too have been consecrated, set apart for the service of God and the building up of his Kingdom.” The world may push God aside in the name of human freedom, pass Him over in silence, or shun Him in the public square, but we disciples of Jesus know He is the key to meeting God and understanding humanity—as this cathedral’s magnificent architecture celebrates. “Faith,” this great disciple explained, is coming “to understand the grandeur of our own humanity, the mystery of our life on this earth, and the sublime destiny which awaits us in heaven”. It teaches us that we are “endowed with an inviolable dignity” as God’s image, and “called to eternal life”; that we must die to self in a continual conversion that brings true freedom and broad vision; and that we can receive the gift of God’s love and work “to draw all people into the beauty of that love and the light of that truth which alone brings salvation to the world.”

Secondly, in faithfully following his Lord, Pope Benedict was taken “places he would rather not go”. For many decades as a theologian and then Prefect of the Congregation for the Doctrine of the Faith, this most charming, gentle and humble man was caricatured as a doctrinal rottweiler by those out-of-sorts with Church tradition. Then, at an age when he reasonably expected to be relieved of these pressures and retire to writing, music and contemplation, he was called to the papacy in a decade of unrelenting scrutiny and criticism of the Church’s pastors. Yet he accepted this “martyrdom”, this giving witness to Christ through thick and thin, until he believed he had no more to give. Quoting Our Lord and St John Paul at his Installation Mass, Benedict told us all to Be not afraid. “Do not be afraid of Christ! He takes nothing away, and he gives you everything. When we give ourselves to Him, we receive a hundredfold in return. Yes, open, open wide the doors to Christ – and you will find true life!”

Peter was told to feed not only the sheep but also the lambs, and this latter-day Peter proved to be an extraordinary teacher and spiritual grandfather to the young at World Youth Day in Sydney. He led and tutored, united and confirmed, with the reliability of rock. To love God requires we know Whom we love—otherwise we may love a mirage. Ours must be a thoughtful faith, a faith seeking understanding. So, the Pontiff was a fearless yet subtle proclaimer of the Gospel and Catholic doctrine. His keen intellect and deep piety gave him a singular ability to make the truths of faith come alive. As an adviser to and interpreter of the Second Vatican Council, as CDF Prefect responsible for guarding the Church’s faith and morals, as the authority behind many Church documents and especially the Catechism of the Catholic Church, and as writer of theological works that will nourish the sheep for centuries to come: Pope Benedict was undoubtedly one of the greatest minds ever to occupy the chair of Peter.

Speaking to seminarians and young religious gathered in this cathedral, but also to all of us, His Holiness reprised the Lord’s call to walk in the light (cf. Jn 12:35). “Each of you has embarked on the greatest and the most glorious of all struggles: to be consecrated in truth, to grow in virtue, to achieve harmony between your thoughts and ideals, words and actions… Let prayer… and meditation on God’s word be the lamp which illumines, purifies and guides your steps… Make the… Eucharist the centre of your life”, lifting up “your own hearts and lives, through Christ, with Him and in Him, in the unity of the Holy Spirit” each time a priest raises the host in sacrifice to God.

Disciple, witness and teacher, Benedict XVI will be remembered as a faithful Christian who followed his Lord, as a statesman who pleaded for respect for human rights, as a thinker whose wisdom contributed to both Church and society, as an aesthete who appreciated the power of beauty to bring people to God: he was, above all, a lover—a man who deeply loved Jesus and sought to bring that love to all people. I experienced that warmth and affection on many occasions, including the last time I saw him in his retirement convent when we reminisced about World Youth Day in Sydney and he expressed his concerns for Cardinal Pell, then wrongly imprisoned. The encounter with God’s love in the person of Christ was at the heart of his first encyclical God is Love, of his three-volume series Jesus of Nazareth, and of his WYD catecheses.

When he arrived at Barangaroo, Pope Benedict told the young people that theirs was the mission of boldly and fearlessly proclaiming the greatest love story ever told: “that God has become one of us, that the divine has entered human history in order to transform it, and that we are called to immerse ourselves in Christ’s saving love.” At his meeting with disadvantaged youth, he warned against counterfeit loves. At the Vigil at Randwick, he challenged us to “Let unifying love be your measure, abiding love be your challenge, self-giving love be your mission!”

As shepherd to the Lord’s flock, using his immense intellectual gifts, piety, charm and humility to point people toward the Good Shepherd, Jesus Christ, Benedict taught us that pastors must above all be disciples, witnesses, teachers and lovers. As Simon Peter was asked three times over so Benedict heard the Lord ask his successor: “Benedict, do you love me?” And with his dying words he answered: “Lord, I love you”

My thanks to all who have contributed to this beautiful liturgy tonight. I guess many of us will meet again for another requiem in two or three weeks time, when we hope the body of Pope Benedict’s friend and ours, Cardinal Pell, is repatriated to Australia. I expect both are now interceding for us here in Sydney, but we should also continue to intercede for them. Details of the Funeral Mass and other liturgies will be published soon.

We give thanks to Almighty God for our last pope and pray also for our present one. We echo Pope Francis’ prayer for his predecessor: “Benedict, faithful friend of the Bridegroom, may your joy be complete as you hear His voice, now and forever!”

Welcome to St Mary’s Cathedral in Sydney for our Solemn Pontifical Requiem Mass for Benedict XVI, in baptism Joseph Aloisius Ratzinger (1927-2022). As priest-theologian (1951-77) and bishop-pastor (1977-82), as cardinal-prefect and close collaborator with Pope St John Paul II (1982-2005), as teacher-pope (2005-13) and finally praying-pope-emeritus (2013-22), he selflessly served Christ and His Church for over seventy years.

Pope Benedict was the author of 66 books, hundreds of lectures, articles and homilies, umpteen Vatican documents and seven major papal teaching documents. His thought influenced generations of bishops, priests, scholars and lay faithful, will be of enduring significance for centuries to come, and may well contribute to his ultimately being recognised as a Doctor of the Church.

The German Pontiff will forever hold a special place in the hearts of Australians. He drew the biggest crowds of any papal visit to our shores during the grace-filled World Youth Day in 2008; he consecrated the altar and image of Our Lady of the Southern Cross here at St Mary’s Basilica; he canonised Australia’s first saint, Mary of the Cross Mackillop, in 2010; he blessed and opened Domus Australia, the Australian pilgrim house in Rome, in 2011; and he was buried in the very vestment we made for him to wear at the World Youth Day Mass at Randwick.

A week ago I joined hundreds of thousands of lay faithful in Rome, 4000 priests, 400 bishops, 120 cardinals and one Pope in commending this pope to Almighty God. Now we get to do so here in Sydney, if not on the same scale, certainly with the same love. Amongst the cardinals present was our own beloved George Pell. As I was in Rome for the funeral, I met him several times and had two meals with him. He was in sparkling form, witty and wise. I didn’t dream it would be the last time I’d see him in this life. As we pray for Pope Benedict’s eternal repose, we add a prayer for his friend George, that they might meet merrily in heaven.

Concelebrating with me this evening are Bishops Columba MacBeth-Green (of Wilcannia-Forbes), Richard Umbers and Danny Meagher (Auxiliaries of Sydney), Peter Ingham (Emeritus of Wollongong), Bernard O’Grady (Emeritus of Gizo in the Solomon Islands), Terry Brady (Emeritus Auxiliary of Sydney), and Monsignor Carl Reid (Ordinary of the Ordinariate of the Southern Cross).

I also acknowledge the vicar general, vicars, deans, rectors and many brother priests, along with deacons, seminarians and other ministers. Also present are leaders or members of religious congregations, prelatures and movements, knights and dames of the papal orders or orders of Malta or the Holy Sepulchre, the curia of the Archdiocese and Directors of its major agencies and ministries. I also salute representatives of the Antiochian, Coptic and Greek Orthodox Churches, whose presence is a tribute to Pope Benedict’s warm ecumenical relations and ours here in Australia.

From the diplomatic and consular corps: I salute representatives of Fiji, India, Malta, Namibia, Papua New Guinea, Timor-L’este, the United Kingdom and, of course, Germany.

A very warm welcome to everyone present here this evening, as we commend our dear departed “Benedetto” to the God he served so well.