HOMILY FOR THE CELEBRATION OF THE PASSION OF THE LORD 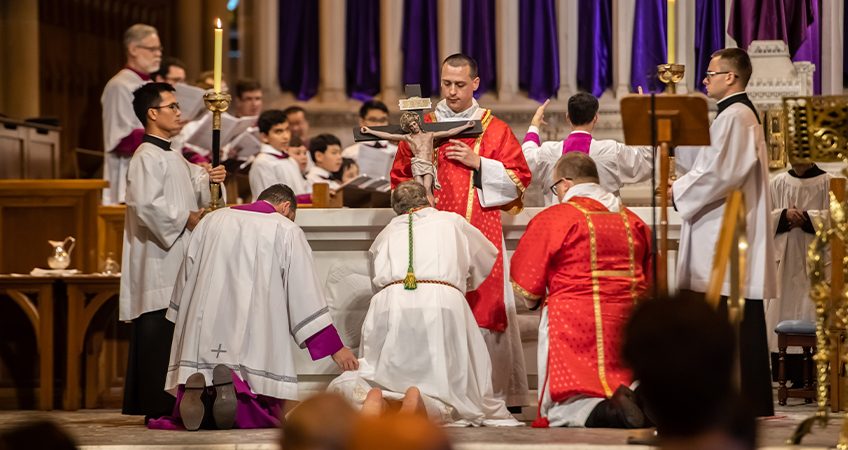 Last Sunday’s Passion of St Luke and today’s of St John are in different keys. At Luke’s Passover-turned-Eucharist Jesus spoke ominously of betrayal to come and communing in His broken body. He told His men to bring swords to Compline in the Garden. He sweated blood while begging the Father to relieve Him of what was coming. In the following hours He suffered physical and mental torture, humiliation and abandonment, while women wailed and soldiers scoffed. He died “crying out in a loud voice”.

John’s Jesus, on the other hand, seems very much in control. No record there of instituting the Eucharist, agonising in the garden, being dragged through the streets. Jesus turns the questions of the guards, high priest and governor back on them, reminding them that He is about truth not power, friendship not violence, a kingship not of this world. Pilate is more than a little convinced that Jesus is some sort of king (Jn 18:39; 19:5,14-5,19-22). Even from the cross He calmly gives directions about care of His Mother and the Church (Jn 19:25-7). Instead of crying out, Jesus declares His work complete and gives up the ghost (Jn 19:28-30).

It’s the other people in John’s story who are afraid. Biologists tell us that when frightened our instinctive response is either fight or flight. Judas is afraid of losing financial control and so makes a terrible decision. Caiaphas the High Priest fears losing his spiritual authority and is willing to sacrifice an innocent.[i] When asked for Jesus, He confidently answers “Yahweh—I am He”, and the Temple police fall down in terror at this divine name (Jn 18:6). Most of the disciples flee; hairy-chested Peter follows at a distance but goes to water when a woman demands his ID.

Pilate the Governor is also frightened. He’d rather not condemn an innocent, especially one who might be a son of god (Jn 18:38; 19:6,8,12). But he’s cowed by threats of riot and bad reports to Rome, and so orders the execution (Jn 19:15-16). The soldiers, too, are agitated and, even though Jesus is clearly dead, they pierce His heart to be doubly sure (Jn 19:32-34). The air was thick with fear that first Passion week.

The challenges of the first Holy Thursday reverberate today. An occupying imperial power using military force against innocents and driving others into hiding: was this Rome of Jesus’ day or Russia of Putin’s? The flight and hiding of the apostles and isolation of Jesus parallel recent experiences of COVID lockdowns and floods. Jesus’ agony in the Garden and cries from the cross resemble the depression and anxiety of many today. And the betrayals of Judas and Peter show that Christians in any age can renounce their ideals to go with the flow.

On Good Friday there are more resonances. On a personal level, many will know the fear, abandonment and grief, the loyalty and disloyalty, hopes and dashed dreams, of the characters in the Passion.

On a social level, we might consider the release, two years ago this past week, of my predecessor as archbishop, vindicated unanimously by the High Court after more than 400 days in prison. Recent books by Keith Windschuttle, Frank Brennan and Gerard Henderson have detailed how journalists, politicians and the legal system made the Cardinal a hostage for the failings of others in the Church. The case exposed many weaknesses in the Victorian justice system. Others in our community experience injustices also.

On a more ‘cosmic’ level, the ‘weather events’ at Christ’s death have their congruences with the bushfires, floods and pandemic of recent years, which have highlighted nature’s power and our vulnerability.

Jesus’ wisdom amidst such challenges is this: Do as I do. Count yourself greatest when serving the least. Eschew violence. Pursue truth. Endure evil rather than perpetrate it. Suffering is the price of our being alive and aware: seek a supportive community and pray the Father relieve your woes. Take up your cross and follow. Offer your all as a sacrifice to God and a gift to others. Join me in building “a kingdom of truth and life, of holiness and grace, of justice, love and peace”.[ii] Then you will see even sea and sky listen to my voice. Faith is the remedy for present distress.

Already by the fourth century, according to the pilgrim Egeria, there was in Jerusalem a Good Friday service of readings, prayers and venerating the cross. By the Middle Ages in England and France, people would reverently ‘creep’ barefoot and on their knees, to kiss the Good Friday crucifix.

In nineteenth century Spain, the King would pardon prisoners after kissing the Good Friday cross, saying “I forgive them, as I hope God will forgive me.”

As we creep to the cross, we lay all our anxieties before the Crucified. We tremble before the enormity of God-made-man, man-made-slave, slave-made-dead on a cross (Phil 2:6-11). As Isaiah said “the crowds were appalled on seeing him—so disfigured did he look that he seemed no longer human… despised and rejected, a man of sorrows, acquainted with grief.” (Isa 52:13-53:12) We shiver with delight at what God has done for us and quake with shame at what we have done to God. If Holy Thursday tells us that God is with us in our fears and sufferings, Good Friday says He is not just with us but for us, redeeming it. He consoles and strengthens, renewing character and gracing reconstruction efforts. He builds peace after war, health beyond sickness, community after fragmentation. As we creep to the cross, Christ will take our burdens on Himself and “pierced for our faults, crushed for our sins,” as Isaiah prophesied, “by His wounds we shall be healed.”

[ii] From the Preface for Christ the King.