FERVERINO FOR BENEDICTION AFTER “WALK WITH CHRIST” 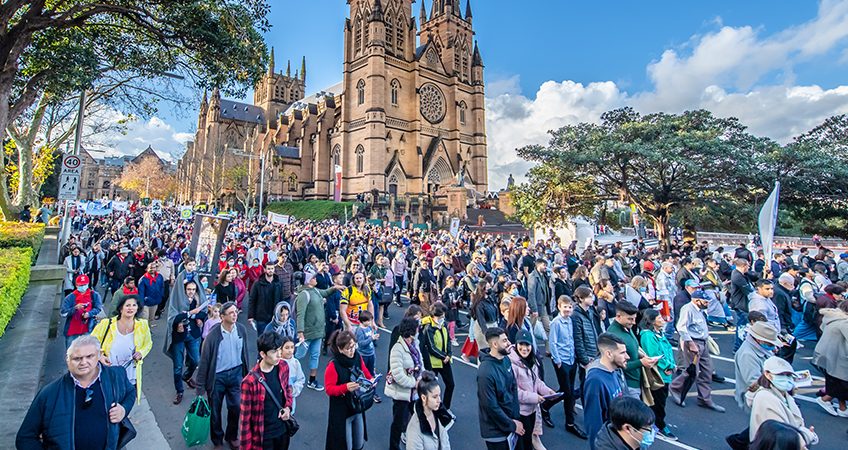 Thank you all for joining us for the Walk With Christ procession on the Solemnity of the Most Holy Body and Blood of Christ—Corpus Christi. First the construction of the George Street tram, then the COVID pandemic and associated limitations on public gatherings, have in recent years interfered with this particular tribute of love and public witness. So it is great to be back together again!

I acknowledge today the presence of my auxiliary bishops, Most Rev. Terry Brady, Richard Umbers and Danny Meagher, as well as clergy, religious and lay faithful who helped organise, prepare and assist in our procession today.

To outsiders, unfamiliar with Catholic practices, today’s procession may have seemed a little strange. On tonight’s news we might hear that, despite the weather, thousands of people were out demonstrating in Sydney earlier today but no one could work out what it was they were against! Instead of chanting “what do we want?” and “when do we want it?”, they had other mysterious chants going on. And up front were some weird religious guys carrying something shiny with a big shade over them to keep the weather out. Whatever it was, it wasn’t an everyday happening in the harbour city!

Processions were much more familiar to the ancients. They celebrated something—an event or a person—and behind these celebrations sat deeper beliefs about themselves and the world. For this reason, sociologists consider all processions to be rituals; events that express a particular view of reality, certain values, hopes, expectations, and that use earthly symbolism to express transcendent realities.

The ancient Romans were famed for their ‘triumphs’ after military victories, joyously carrying the spoils of war through the city, their heroes on horseback and their enemies in chains, to the thunderous cheers of the people. They thereby celebrated their belief that they were the most powerful military force on earth and greatest civilisation ever, and that their gods Apollo, Ceres, Juno and Mars were well pleased.

The ancient Egyptians held extravagant funeral processions, celebrating the deceased, their past and future. The corpse was elaborately prepared, various funerary goods also, and the mummy in its inner coffin solemnly escorted with sacred symbols and chants to the tomb. All this demonstrated the Egyptians’ fascination with death, understood not simply as the end of life but as the entry into the afterlife—the ritual connecting them with the gods and spirits who would guide the deceased through the challenges of the new existence awaiting them.

In Britain, from medieval times to this day, there have been elaborate coronation processions marking the advent of a new monarch, not just consecrated and adorned with insignia of office, but displayed as sovereign so the people might show their respect. Again this demonstrated beliefs—the sacred office of kingship, authority, law and order, Britishness. Carrying the celebration to the streets allowed the people to join in giving testimony to these beliefs, not just the lords and ladies who got inside the cathedral or palace.

Arguably the biggest procession in history was that of the people of Israel, for it involved the whole nation and lasted for forty years. The line of Jews crossed through the sea, led by a pillar of cloud or fire and Moses with staff. As the procession went on, stone tablets with commandments on them led the way, and later ceremonial ark enclosed that stone law and the very presence of God. Soon they added trumpets and priests in special garb, poles to carry the ark, and elaborate decoration around it, and it would be brought even to the scene of battles. The procession celebrated Israel’s liberation from Egypt, the promises that God had made to them, and their undertakings back to Him.

What about our Eucharistic procession today? What does it say about what we believe? Well, first of all, it is a visible expression of the fact that we are Christians, followers of Christ, our way, truth and life (Jn 14:6)—as we all followed behind Him today.

Secondly, our procession affirmed that the God we worship loved us so profoundly that He gave His only Son (Jn 3:16); so intimately, that that Son took flesh and dwelt among us (Jn 1:14); so totally, He gave up His life for us and for our salvation, foretelling and memorialising this by giving His Body and Blood to us in the Eucharist (Mt 26:26-29; Mk 14:22-25; Lk 22:19-20; Jn ch. 6; 1Cor 11:23-26). Here in the Eucharist we meet a God-man whose love for us is so total He would give us everything He is: His divinity and His humanity, His body and soul, His flesh and blood, His very substance and being to be part of ours.

Thirdly, our procession through the streets, past the office blocks and centres of commerce, the parliament and government buildings, the law courts, the hospital, the monuments to our history, past local families, tourists, those living on the streets, and all the rest, declares that Christ’s incarnation and eucharist is all for them, for everyone, and we prayed for those institutions and people that they might come to know, love and serve Him.

In the recent biopic, Father Stu, Mark Wahlberg plays a foul-mouthed, boozing boxer, turned would-be actor, turned seminarian, who was converted by a vision of the Virgin Mary following a life-threatening motorcycle accident. But it emerges that he has an incurable degenerative muscle condition, like Motor Neuron Disease. Angry at first with God, Stu comes to understand his suffering as a gift drawing him closer to the suffering Christ. When he begins losing the use of his hands, the rector tells him he cannot be ordained; but parishioners petition for his ordination and the Bishop agrees. Doomed to a short and limited ministry, he cares for his family, friends, seminarians, prisoners and patients before dying, aged 50. But to have offered even one Mass makes it all worthwhile from the point of view of eternity that he had come to embrace.

Our procession today, like the processions of old, tells who we are and in relation to God, who is sovereign in our lives, what it is makes sense of our lives and deaths, what matters most to us. It doesn’t just reveal these things, it proclaims them, publicly, for all the world to see and hear.

Before we were called Catholics, or Christians, we were called Followers of the Way (Acts 9:1-2; 19:9, 23; 22:4; 24:14). This was because discipleship is about following a path more than reciting propositions; about a relationship with a Person more than membership of a club. And walking behind Him in His Blessed Sacrament says loud and clear that we want that relationship, that following, that whole-of-life commitment, like Israel’s forty-year-long procession through the desert.

Whole of life, I say, and of death, and of eternity beyond, for the procession we join is that of Palm Sunday with palms and praises of this King of kings; that of the Way of the Cross, from his arrest and trial, torture and execution, to his tomb; that of his rising from the tomb and from the earth to heaven. To follow the Way is to walk that path with Him, with the lows of a procession of the enslaved and of the dead, and the highs of a celebration of victory, liberation, coronation. And it is to make His way ours, His path our own way to heaven.