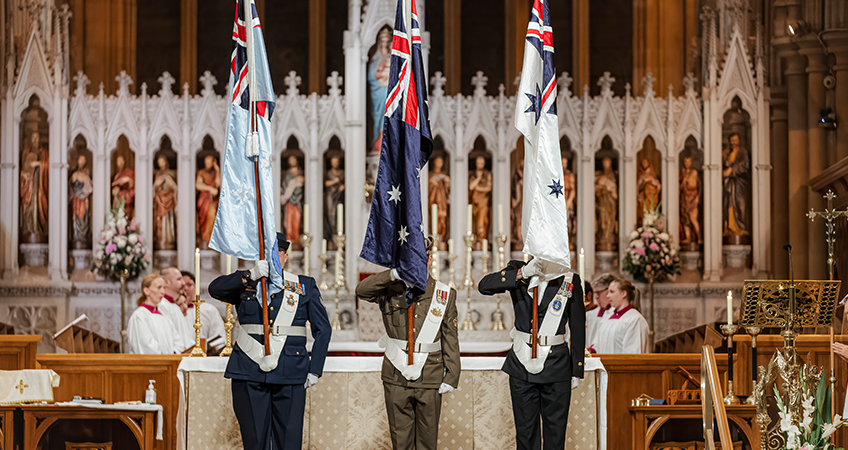 Just across the way from us, at the heart of the Anzac Memorial in Hyde Park, stands what some consider to be Australia’s greatest sculpture.1 Rayner Hoff’s bronze of ‘Sacrifice’ (1930-34) is in the Hall of Silence amidst many other features created by him. At remembrance services and other times, the sculpture is the object of contemplation for staff, pilgrims and tourists.2 It depicts three women combined into a single column like a Greek caryatid—a soldier’s mother, a soldier’s sister and a soldier’s widow holding an infant. Their heads are bowed as they support on their shoulders the weight of a slain male warrior lying upon a shield. The warrior, with arms outstretched on his sword in a crucifixion-like pose, has his head supported by the woman holding the infant. His lifeless body shows no wounds or damage and is strikingly peaceful.

In the background is the Spartan warrior code: that a soldier must return from battle, either carrying his shield as a sign of victory or carried on his shield as a sign of honourable death. Hoff’s work captures other facets of war also. One is that the causality list extends beyond those injured or killed in battle: those left behind—parents and siblings, spouses and children, surviving comrades and friends—must deal with the anger, grief or survivor guilt;3 they “carry the weight” afterwards. And the sacrifices made in war are predicated upon there being something or someone worth dying for: the women holding the body of the soldier represent the way of life and people whom the dead thought worth giving their all to protect.

Hoff’s sculpture of the Spartan-Australian warrior stretched upon women’s shoulders captures the tension between the beauty of courage in sacrifice and the ugliness of grief in war. That tension comes into relief every ANZAC Day, Remembrance Day, or other commemoration of our war dead. It lies at the very heart of all sacrifice: the tension between gory and glory, between horror and honour, between death and life.

We see this tension in another artistic representation of the violence, grief and glory of laying down of one’s life for others, made especially for this Paschal season. Michelangelo’s Pietà (1498-9)is housedin St Peter’s Basilica in the Vatican and an exact copy is to be found in the crypt below this cathedral. Again, in this work it is the role of women to carry the weight of the life lost. Mary nurses in her lap the corpse of the crucified, who died in a spiritual rather than military battle, not as a soldier but as a slave who freely gave up His life to redeem us all.

Similar to Hoff’s, Michelangelo’s corpse is serene and shows no signs of damage. What dominates, however, is the Mother, looking down on the body of her only child, lamenting his loss while still a young man. It’s a scene with which we can all sympathise; some will have felt such a loss first-hand; loved ones of fallen soldiers always have. Such sacrifice is costly for many.

Sacrifice, anthropologists tell us, is a defining feature of religion; it’s at the heart of the Christian faith. In the Old Testament, we have the harrowing incident of Abraham about to sacrifice his only son (Gen 22:2); even knowing the end result, our hearts break for him, as for God the Father whose own Son will be substituted.

Moses begs Pharaoh to let the People go bush for three days, so they can sacrifice to their God (Ex 3:18); hard-hearted Pharaoh’s response is to drive the slaves harder and, when they try to escape, to engage in blood-thirsty military pursuit. Once free from slavery, detailed laws concerning the Passover and other sacrifices will be at the heart of Jewish faith and practice (Lev chs 1-7) and the background to Jesus’ Last Supper, Institution of the Eucharist, and self-gift at Calvary. As Israel understood it, to be present to God, maintain the covenant, be pardoned and receive blessings all required sacrifice.

Although sacrifice took on a radically different character in the New Testament, it remained crucial. Jesus repeatedly predicted His passion and death; on the night before He died, He transfigured the Passover sacrifice into the Eucharistic one; on Good Friday He gave up His Body, Blood and Soul. The Epistle to the Hebrews speaks of Christ as the perfect sacrifice that once and for all atones for the sins of humanity (Heb 9:11-14). And our liturgies are full of related symbolism and language.

But in an age where burning animals, sprinkling blood or crucifying an innocent man are unthinkable religious practices, what do we make of this talk? Well, even in modernity we still have the ideas of sacrificial giving and self-sacrifice; we all know we must sometimes give up some things, even things very valuable to us, to abide by our principles, make the most of ourselves or give ourselves to others in love and service. We honour those who have done this with medals, memorials, services. Even in this scientific age, a religious concept like sacrifice has some purchase on us.

At its core, sacrifice is an acknowledgment that there is something greater than us; that our individual lives are not the be-all-and-end-all of things. Sacrifice names our willingness to offer something, in some cases our very lives, to that and for that which we count more important. Modernity tells us that our personal egos and desires are the true centre of the universe, and must never be compromised. Easter and Anzac Day remind us that a life closed in on itself, that flees to comfort over responsibility and luxury over labour, and treats others as mere means to our private ends, is really no life at all. Sacrifice is the antidote to the selfishness of individualism. It reminds us that our lives are never truly just our own. Our lives are from others and for others and fulfilled in our communion with others.

We all have our crosses. Some make sacrifices in order to care for their family, friends, work colleagues, or the poor and suffering. Some do so for the sake of the common good: think of all we’ve gone through these past few years to keep ourselves and each other safe from COVID. Some give up their life or comfort for their country, family, principles. In each case there is loss. But the loss is not the end of it.

In today’s Gospel, the risen Christ greets His disciples with “Peace be with you” (Jn 20:19-21). After showing them His wounds, the medals of honour of His self-sacrifice, He exclaims again “Peace be with you”. St John Paul II referred to this Easter gift of peace as the gift of divine mercy.4 God’s mercy is expressed in forgiveness rather than recrimination and God’s children can in turn become peacemakers, conduits of that divine mercy (Mt 5:9). At a time when war and violence sow havoc in the Ukraine and beyond, when peace is threatened and sacrifices are being made by many, we implore the Risen Christ: “Jesus, Master, have mercy on us.” (Lk 17:13)

Welcome to St Mary’s Cathedral in Sydney for this ‘Low Sunday’ Mass, and a very Happy Easter to you all!

Tonight, on the eve of Anzac Day, we remember not only those who served in Gallipoli 107 years ago, but all of those who have sacrificed for our nation. We are especially conscious that the tragedy of war is not something from a bygone era only: there are ongoing civil wars, cross-border wars, or terrorist insurgencies in Afghanistan, Algeria, Burkina Faso, Cameroon, Chad, Congo, Eritrea, Ethiopia, Iraq, Libya, Mali, Mozambique, Myanmar, Niger, Nigeria, Syria, Tanzania, Tunisia and Yemen, and drug wars in Colombia and Mexico. As we speak, the cities of Mariupol, Bucha, Kyiv and others are under heavy bombardment, and the death, damage and displacement in Ukraine is enormous. The callous disregard for non-combatant women and children serves as a haunting reminder of the grim reality of war.

From the Diplomatic and Consular corps I acknowledge the Consuls-General of Spain, Timor-Leste and Turkey, and the Deputy Consuls of Ireland and the United Kingdom.

Concelebrating with or assisting me tonight are present or former service chaplains. Also present are representatives of several religious congregations and archdiocesan agencies. And to all those present for our continuation of the Mass of Easter Sunday: welcome to you also.

In the Catholic Church the last day of the Octave of Easter is also Divine Mercy Sunday, when we celebrate the fact that God so loved the world He gave His only Son and that Son died and rose for our salvation. Tonight we pray that in His great mercy the Prince of Peace will protect all those in harm’s way and take to His bosom those who have died in war.