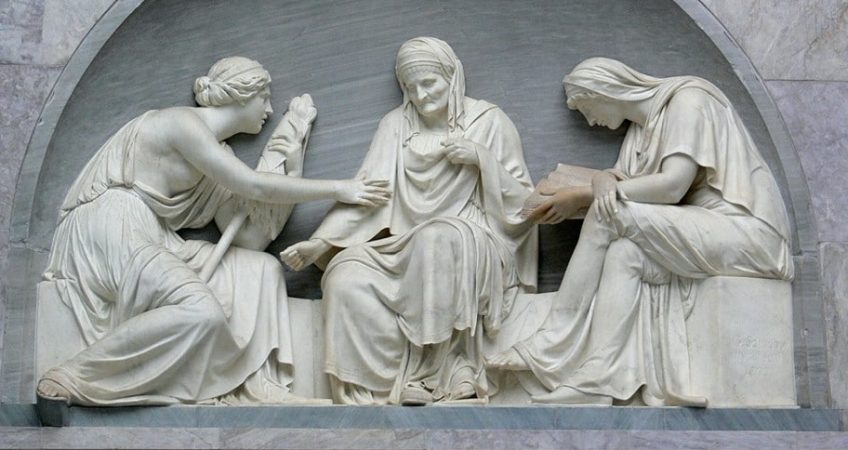 Homilies Archbishop Anthony Fisher OP
Archdiocese of Sydney · INTRODUCTION TO MASS FOR THE 17th SUNDAY OF ORDINARY TIME, Year A

The Moirai or Fates were the good luck gods of the ancient world. People experienced many aspects of their lives as beyond their control. So much depended on where and when and into whose family you were born. On forces of nature, weather, accidents and plagues like COVID. On the actions of the powerful or impersonal forces of economy or history. Even things we think we can control can play out in unexpected ways. Some people seem to get all the luck; other people, no matter how they try, have one bad thing happen after another. The ancients were convinced that goddesses or demons or celestial orbs controlled much of our destiny. The question was: how to get Lady Luck working for you rather than against?

A story is told of ancient Babylon. Some men gathered in the Temple of Learning to discuss how to get the goddess Fortuna to confer on them her ‘golden purse’. At first they consider it a matter of divine caprice: Lady Luck has her favourites, so hit the gaming tables or the race track and see. But Arkad, the richest man in Babylon, points out that gambling luck is rare, and fleeting, and most don’t keep their winnings for long. When discussion turns to business, he suggests that those who seek opportunities, and make the most of them, are the ones who have the breaks. As the old saying goes, fortune favours the brave; ‘men of action are favoured by the goddess of Good Luck.’[i]

First told in a pamphlet written by George Clason for distribution in American financial institutions in the 1920s, this story became a centrepiece of a best-selling self-help book. There he proposed seven cures for a lean purse and five laws for a gold one. Success, he explains, has to be earned not by wild speculation but by productive work and a readiness to seize the day. Had Americans heeded his advice, they wouldn’t have staked so much on shares carried on margin and might have avoided the Wall Street crash. But like our fabled Babylonians they thought gambling – in this case on the stock exchange – was the way to good fortune. The result was the Great Depression.

We have two views here of luck, fate, destiny and the Gods. But both views would seem to have some support in Christianity, one in the ‘Quietist’ tendency, the other the ‘Pelagian’. Paul seems to sit with the Quietists when he says today that God turns everything to the good for those He esteems (Rom 8:28-30). If you’re one of God’s favourites, things will go well for you; if you’re not, bad luck: it’s all grace. On the other hand, some like St Ignatius of Loyola thought like the Pelagians, that we have to do our own part and then you’ll get what you deserve. He’s credited with saying “Pray as if everything depended upon God but act as if everything depends on you”.[ii]

Well, which is it? Should we sit back and wait for Grace to choose us, or ‘work our butts off’ choosing Fortune for ourselves? Let’s look at this morning’s ‘kingdom parables’ (Mt 13:44-52).[iii]

It’s the gambler’s dream: a man stumbles upon treasure in a field. He’s not even out fortune-hunting, like the guys with the metal detectors at the beach; in fact he’s so unprepared, he has to bury the treasure and come back for it later. Faith can be like that, and romance too: unsought, unmerited, out of the blue, pure gift. But when it comes, we drop everything and focus on it alone.

Yet in the subsequent parables the guy is actively searching the markets and dragging the seas for his rewards: he’s like Arkad, strategizing and beavering away to take Lady Luck hostage. He gets what he deserves. Prudence, justice, perseverance are like that: you get out what you put in. And sometimes that requires staking all you are and have.

So the Bible might seem to support both conceptions of God and luck. Yet look again at our texts, and things are not so simple…

First, because divine providence isn’t remotely random or arbitrary, the way the ancients thought of luck. It is God’s intelligent and loving (if sometimes mysterious) purpose working itself out in our lives, turning all (as Paul says) to the good.

Secondly, where the Pelagians relied upon themselves to make their own luck and the Quietists waited for God to do it all for them, Paul says God co-operates with those He calls who love Him. Paul’s God – and Ignatius’ also – collaborates with His beloved, makes them partners in creation, redemption, destiny. Justification is no violence: it is invitation and free response, a two-way relationship, God and us together. Grace builds on nature, heals and elevates, inspiring free consent rather than overpowering and replacing it, working with us and within us.

A third respect in which Christian providence is different to pagan luck is that God doesn’t preference His friends with goodies; no, Paul says God turns to the good everything they experience, good or bad. Some of you might have seen the absolutely inspiring Channel 7 programme “In the Blink of an Eye” this week past: if you didn’t, I recommend you view it on the internet or on 7-plus. It tells the story of the four children killed on their way to buy ice-cream earlier this year and their families. It is one of the most powerful testimonies I have every seen to the power of faith in adversity. And it demonstrates very starkly that faith in divine providence doesn’t mean immunity to adversity. The beloved of God aren’t promised purses of gold – in this life anyway. Rather, God places us in a world full of opportunities and challenges, sometimes awesome, sometimes mundane. Rather than constantly interfering with our world or our choices, He leaves us free, all the while gracing our good intentions and actions.

Preachers of the ‘prosperity Gospel’, who think God’s favourites are guaranteed health and wealth in this life, get this wrong. Even the saints, who did loads of good stuff, suffered the ill-effects of nature, or the actions of others, or their own choices. It’s sometimes a mystery to us why God permits insecurity, weakness and trials for those He loves. But if we respond to His call with love, Paul says this morning, even the most difficult things can be turned to our ultimate good. So the Christian God is neither Lady Luck capriciously bestowing gold purses on her favourites, nor is He a cosmic auditor rewarding those who’ve wooed him. As St Bernard of Clairvaux put it, these things “serve not caprice, but usefulness; not pleasure but salvation; not what we desire but what is good for us.”[iv]

In the end, it is not just us out searching for and finding treasure that is the kingdom of God. No, it’s also God who is out searching for treasure in the field of our hearts, for priceless pearls in our actions, for edible fish in our community. He sees our potential, our searching, our willingness to cooperate with His grace. And He so values this that He’s willing to give up all He has to sell it all for us. This is what our ‘salvation’ talk is all about as Christians: that God rescues and converts, heals and elevates, purifies and glorifies people as ordinary and complex as you and I, in whom He recognises the pearl of great price, “the image of His only Son” – the Son He was willing to give for our freedom and ultimate happiness.

[ii] CCC 2834 notes that this saying is commonly attributed to St Ignatius. But it is nowhere to be found in his writings.

Because current circumstances continue to impede attendance at Mass and reception of Holy Communion, I invite those who are joining us by live-streaming to ask God that they might by spiritual communion receive the graces of sacramental communion. Offer this Mass and your hunger for the Eucharist for the safety of your loved ones, of yourselves and of the world.+

INTRODUCTION TO MASS FOR THE 17th SUNDAY OF ORDINARY TIME, Year A

Welcome to St Mary’s Cathedral in Sydney, for the Solemn Mass for the 17th Sunday of Ordinary Time. This week we gather, fewer  in the flesh and more through livestreaming, following the spike in cases of COVID-19 and the new restrictions that followed. The recent cases in three Catholic churches and three Catholic schools here in Sydney serve as a reminder to us that we need to remain vigilant, maintaining social distancing and hygiene rules, taking care of one other, and following all the directives of NSW Health.

We welcome back our choristers today, joining us for the first time for Solemn Mass since the start of the pandemic. Their voice of praise lifts our hearts and minds to God all year round, but especially at this time of crisis for our nation.

To everyone present, including those watching via livestreaming, a very warm welcome to you all!