INTRODUCTION TO MASS FOR THE SOLEMNITY OF OUR LORD JESUS CHRIST,KING OF THE UNIVERSE (YEAR C) + COMMISSIONING FOR ACYF 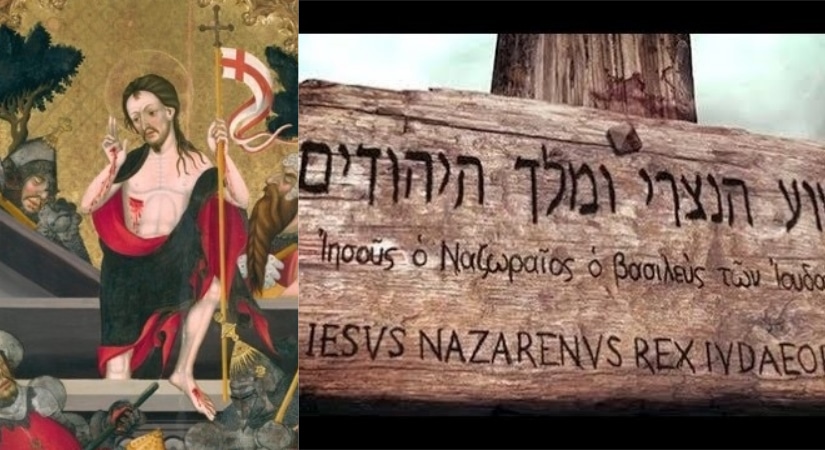 During the Daesh (ISIS) reign of terror in the Middle East, the Arabic letter ‘N’ was painted on the homes of Christians. ‘N’ is short for Nazarene – a name often used for Jesus in the Gospels and for his disciples in the Acts of the Apostles.[i] ISIS tattooed the Arabic N on Christian houses to mark them out for forced conversion, extortion, exile or murder. I have it on my office door at the Polding Centre to express my solidarity with persecuted Christians all over the world. We are all Nazarenes!

They laughed, taunted, mocked. It was all part of His final humiliation. But in fairness to the governor, the religious authorities, the crowd, the soldiers and his fellow victims, he was a rather ridiculous king. Kings don’t walk everywhere or ride into town on a donkey. They don’t associate with tax-collectors, sinners, the sick and poor. They don’t dress simply, have for courtiers people like the apostles or a raggle-taggle crowd as their army. They don’t have thorns for a crown or a cross for a throne. Kings are supposed to be strong, powerful, authoritative; perhaps a bit power-hungry, with some serious vices such as killing all their rivals and taking many wives. This Jesus guy was nothing like a proper king! And His kingdom was out of this world!

The spectacle of our Mass today draws upon our tradition and expresses the transcendent, with our soaring neo-gothic cathedral, the pageantry of the liturgical action, the power of the pipe organ, the proclamation of ancient scriptures, and the beautiful music. Some of which may be unfamiliar to you, my young friends soon to embark on your pilgrimage to Perth. Yet that’s as it should be: Mass should lift you out of your ordinary experience, be a taste of heaven. If it’s hip and cool and edgy you’re looking for, there are other places to go for that! But if it’s Christ the King you want, be prepared for something different; if it’s His kingdom that you want to be part of, expect to be set apart for something different yourself. “My kingdom,” Jesus said to Pilate, “is not of this world. If it were, my servants would have fought to prevent my arrest… But my kingdom is not of this world.” (Jn 18:36).

Pilate had an inkling that Jesus’ claims might be true. He was reluctant to execute Him. He felt compelled to fix a notice above the crucifix with Jesus’ titles: Iesus Nazarenus Rex Judæorum, Jesus the Nazarene King of the Jews. When challenged by the chief priests, he left it there (Jn 19:19-22). There’s a tradition in the Eastern churches that Pilate later converted to Christianity. Whatever of that, on the day of the trial he pressed: “So you really are a king?” Jesus answered, “Yes, I am a king. I was born for this, I came into the world for this, to testify to the truth, and all who are on the side of truth listen to me.” There he was, with the King of Truth right before his eyes, and all poor old Pilate could say was “Truth? What’s that?” (Jn 18:37-8)

But at least one man sees the truth. One man knows that kingship is not ultimately about regalia and armies. A criminal, suffering the same execution as Jesus, knows that a true king is no stranger to his people and their sufferings: he is a friend to his people, a saviour. He knows Pilate’s inscription will prove true. As the golden-tongued Bishop John of Constantinople once cried out: “I proclaim him King because I see him crucified, for it becomes a king to die for his subjects. He himself said that the good shepherd lays down his life for his sheep. So, too, the good King lays down his life for his subjects. Christ laid down his life, and that is why I proclaim him King!”[ii]

Here is the great irony of Pilate’s inscription: that it is in stripping Jesus that the soldiers vest Him; in pressing thorns into Jesus’ scalp that they crown Him; in nailing Jesus to a cross that they enthrone Him. His is the kingdom of rebirth, freedom and reconciliation described in our Epistle today (Col 1:12-20) – a kingdom unlike any of this world. It’s different all right! And it is inaugurated on the Tree of the Cross.

I’m reminded here of an old Peanuts comic, in which the ever-knowing Lucy is telling her younger brother Linus about the many uses of a tree. “They provide shade from the sun,” she tells him, “and protection from the rain. They prevent erosion, and their wood is used to build beautiful buildings.” Then she and Linus come across poor old Charlie Brown, downtrodden and depressed, hunched over with his head against a tree: “And when life gets too hard,” Lucy sagely informs Linus, “they are very good to lean against.”

There is no better tree to lean against than the Cross. It prevents the erosion of our souls and builds up the beautiful house of faith. And if the cross is the source of the kingship of Jesus the Nazarene, it shades and comforts the citizens of that kingdom – the Good Thief, the new Nazarenes the Church, each one of us.

To my young friends about to begin the adventure of the Australian Catholic Youth Festival I say: make the most of the opportunities for encounter with Christ, for conversion by the Spirit, for formation in the church – through music and dialogue, silence and prayer, through catechesis and exchange, leadership and service. All this is aimed at a single goal: to make a missionary disciple of you in this life and a saint in the next.

But even after today’s commissioning and Plenary Indulgence, you might not feel worthy or ready. Fear not: if we lean on the cross we find it is the Tree of Life. Though the Good Thief was no model of faith or morals, he found in the cross of Christ the door to Paradise, and found himself made a most unexpected saint. The Nazarene King, who was executed beside him, still carried His cross after rising triumphant from the grave – now as His banner of victory.[iii] He’s a most unexpected king, this king of yours. So perhaps it’s not so bad that you are such an unexpected disciple!

INTRODUCTION TO MASS FOR THE SOLEMNITY OF OUR LORD JESUS CHRIST, KING OF THE UNIVERSE (YEAR C) + COMMISSIONING FOR ACYF

Welcome to our Mass for the Solemnity of Our Lord Jesus Christ, King of the Universe.

Today I will commission the Sydney pilgrims who will soon set out for the Australian Catholic Youth Festival in Perth. Our Mass may be of a rather different style to the youth festival liturgies and concerts, but I’m sure they will appreciate participating in our beautiful tradition of worship on this special feast day. When I see so many young people fired with love of God, the Church and the world, ready to make this journey of faith, my heart is truly warmed and my hope for the future strengthened. Hear, my young friends, the call of Christ to St Francis, to “Go and rebuild my Church”.

The Holy Father has granted to bishops the faculty to give the Apostolic Blessing with a Plenary Indulgence three times a year. I will do so at the end of our Mass today. So as you prepare for this grace, repent of your sins and seek to be completely detached from them, resolve to make a good Confession in the coming weeks, receive Holy Communion with reverence, and pray for the Pope’s intentions. You may ask God to apply this grace either to yourself or, especially in this month of November, to someone you have loved and lost to death. In contrition for our sins we say: