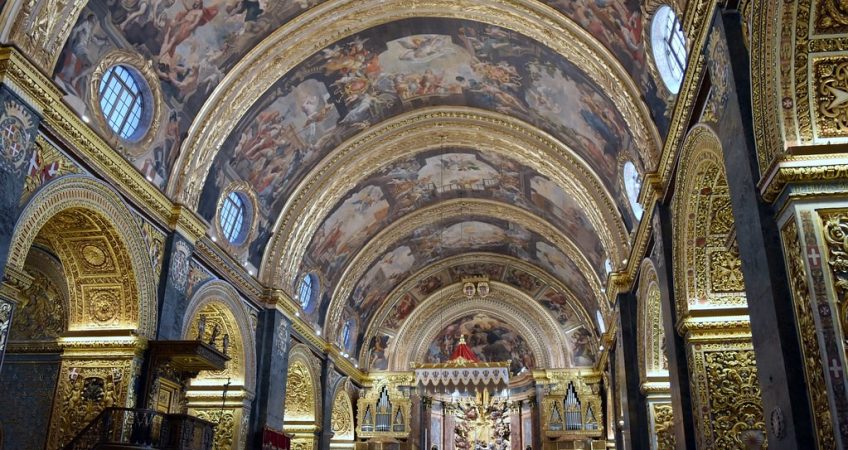 Not a bad second best. Mattia Preti had studied the techniques of the Order of Malta’s most famous – or infamous – painter, Caravaggio, and made his own major contributions to the exuberant baroquing of Italy’s churches and civic buildings. But now he followed his Master into the Order, being admitted as a Knight of Grace, and was thereafter known as Il Cavalier Calabrese, the Calabrian Knight. Visiting the Order’s headquarters in Malta in 1659, Preti was drawn into the artistic-devotional rivalry of the several langues or national battalions of the Order and spent the rest of his life transforming the interior of the previously austere St John’s Co-Cathedral into the jewel-box at the heart of Valletta that it is to this day.

Preti received many other commissions for altarpieces and other works, including dozens of images of the Order’s patron, St John the Baptist, now found in parish churches, museums and private collections all over Malta and beyond, and sometimes on Order of Malta Christmas cards. He also spent eight years creating a Michelangelesque ceiling for the cathedral, with scenes from the life of the Baptist. It is on that particular work of devotion that I would like to reflect today.

John first enters the human scene with his miraculous conception paralleling in some ways the miraculous conception of Jesus told in this morning’s Gospel (Lk 1:26-38). Though her cousin Elizabeth names her ‘the Queen Mother’, Mary did not rest on her newfound aristocratic laurels: she rushed immediately to attend her elderly and more pregnant kinswoman and be midwife to her Son’s precursor (Lk1:39-56). The child, of course, famously leapt in Elizabeth’s womb and the Order of St John treasured these stories. But it was not just a treasury of epic tales and fine art: it followed Mary’s example of in being hospitallers to “our lords the sick and poor”. All members of the Order of St John in Valletta, including Preti himself, would take their turn nursing the sick and dying in the Sacra Infermeria, for a long time the largest hospital in the world. Indeed, it would be here that Preti would himself die, after long service to the Order, surrounded and nursed by his confreres.

The Visitation was, of course, only the first of many times John the Baptist pointed towards the Christ – on this occasion by doing somersaults for joy in his mother’s womb. As the Virgin at the Visitation foreshadows our Order’s hospitaller mission, John stands especially for our other goal of defending the faith and the faithful.

The next scene in John’s scriptural and painted life is his dumb father Zechariah naming him and then recovering his voice so he could sing the Benedictus (Lk 1:68-79). It is the very first Christian hymn, praising God for visiting His people and redeeming them, raising up for us in Jesus ‘a Mighty Saviour’. Then he addresses little Jonny: “As for you, my little child, you shall be called a Prophet of the Most High God.” Zechariah then outlines just what this prophetic task for John – and so for his Order – will involve: pre-evangelisation, “preparing a way for the Lord” in people’s hearts, by offering hospitality and giving witness to God’s love; proclamation, telling people the Good News of “salvation and forgiveness of sins” in Jesus; service, bringing “the light of God’s tender compassion” to the dark places in people’s lives and accompanying them even into “the shadow of death”; and, finally, leadership, guiding people “into the way of peace”.

Next in Preti’s cycle for St John’s Co-cathedral, the baby is all grown up and preaching to the rich and poor, the great and good, and even the not-so-great and not-so-good (Mk 1:1-8; Mt 3:1-12 ; Lk 3:1-18; Jn 1:19-28). He points to the coming Messiah and cries Poenitentia: repentance, return to the Lord, conversion of hearts and lives. Carrying John’s message on a scroll and joining in his pointing are two cheeky cherubs, and a woman who has become one of his disciples. Also listening attentively in the Preti’s crowd is a turbaned Moor, one of the Order’s traditional foes, which the scene suggests are better conquered by word and witness than by canon and cutlass.

None, of course, can preach such a Gospel with authenticity unless he has been open to purification, conversion, even suffering for the faith. So in the next scene Christ gives an example by humbly submitting to Baptism at John’s hands (Mk 1:9-11; Mt 3:13-17; 3:21-22). From an adjoining panel in the ceiling God the Father looks down from heaven and declares: “This is my Son, the Beloved”. The Holy Spirit descends in the form of a dove.

St John, however, dominates the scene. A cherub holds a banner with John’s words Ecce Agnus Dei: behold the Lamb of God. But His work occasions more than the identification of Christ: here is the first public revelation of the Blessed Trinity. Meanwhile putti frolic around the borders of the scene, sporting the instruments of the Passion, portents of this Lamb of God’s ultimate sacrifice.

In Preti’s version, victorious Salome receives the Baptist’s head on a platter, while Herod and his court, the powers of this world, look on unconcerned. These images of persecution, imprisonment and martyrdom had their particular bite for the Order of St John, after losing many thousands of confreres over centuries of defending Europe from invasion, after being driven out of the Holy Land, Cyprus and Rhodes, and after taking their last stand in Malta. They knew very well that an innocent person’s name and memory can be brutally maligned, that he could suffer unjust trial and imprisonment, and that he might even be called upon to give ultimate testimony to the faith. The very real persecution of Christians in many parts of the world today might have begun with Herod’s Slaughter of the Innocents, The Flight of the Holy Family into Egypt and The Beheading of John the Baptist, but it has been replicated many times down the centuries since. Our age is not immune: there are innocents who give glory to God in our own day through their fidelity in persecution, imprisonment and worse. Preti’s knights – who appear below each of his holy scenes, nursing the sick, pointing to Christ, contemplating and worshipping – knew very well that we cannot take for granted the liberty to profess and practice the Christian religion.

And so today, as we bless our malades and pray for all the sick, we pray for divine therapy for our community and culture also: that freedom of religion may be everywhere respected; that human life may be reverenced and supported, rather than snuffed out before it’s time; and that the Order of Malta may play its best part in achieving those noble aspirations.

INTRODUCTION TO LOURDES DAY MASS FOR THE ORDER OF MALTA

Welcome to today’s Lourdes Day Mass for the Australian Association of the Sovereign Military and Hospitaller Order of St John of Jerusalem, of Rhodes and of Malta. I acknowledge the presence of Magistral Chaplains of the Order, Monsignors Tony Doherty and Vince Redden,

The smoke in the air draws our attention to those suffering in dry and burning parts of Australia, and those bravely trying to defend and support them. We pray for them today and will continue to do what we can to aid them practically as well.

I acknowledge the Knights and Dames of the Order, my confreres and consouers, all volunteers and friends of the Association. I also welcome John Spencer, representing the Venerable Order of St John, and representatives of St John’s Ambulance. Yesterday the state of Western Australian parliament joined that of Victoria in approving the euthanasia of the sick, elderly and dying. It is an appalling movement to which our Order is a counter-sign, offering instead love and care to those at a low ebb. Above all, I welcome our lords the poor and sick, especially the malades who have come today to be blessed with water from the Shrine of Our Lady in Lourdes. Welcome to you all!