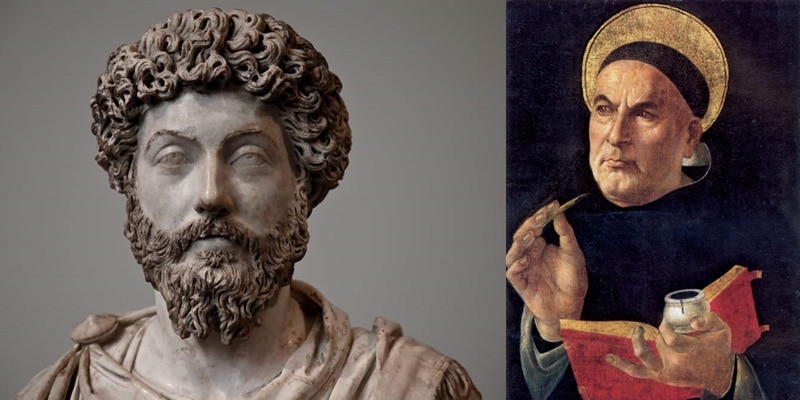 “It never ceases to amaze me: we all love ourselves more than other people, but care more about their opinion than our own.” So wrote the Roman emperor and Stoic philosopher, Marcus Aurelius.

Stoicism and Christianity have a complex relationship, from the time St. Paul first dialogued with them in the marketplace in Athens (Acts 17:18). Though there were crucial differences, the Stoics joined us in monotheism, in cultivating a patient perseverance, and in teaching liberation from anxiety through submission to the divine will. A tradition even arose that Paul and Seneca were regular correspondents.[1] John, too, seemed to take a decidedly Stoic turn when he compared Jesus to the Logos or universal reason governing all things (Jn 1:1-14).

So Marcus Aurelius’ wonder at our preoccupation with self yet concern about what others are thinking or saying speaks not just to ancient pagan philosophers but also to Christians of all ages. It goes to a longstanding question of what or who should we love, and what should be our priorities amongst them. Anything as good as love must have some order to it: if we love everyone equally, we don’t really love anyone; if you think everyone is your best friend, you probably don’t have any friends.[2]

So how do you sort out who or what to love most? Marcus Aurelius implied that people often love themselves too much, while incongruously also being over-concerned about other people’s respect: their love, he suggested, is disordered. The great Christian theologian St Thomas Aquinas thought the same, but he took his lead not from Aurelius but from today’s Gospel (Lk 14:25-33).[3] It tells us that when it comes to loving we should put God before people, love ourselves appropriately, often put family before others, and treasure people above things. Not just because God commands it (Dt 6:4-7; Lev 19:17-8; Lk 10:27 et par) but because God is the most loveable of all Beings, the most deserving of all worship, the source of our greatest happiness.[4] And if we are to love our neighbour as ourselves, we must have a proper self-respect, a proper care for our own lives, our bodies and souls, our true good.[5] Those who hate God or themselves cannot truly love others. When it comes to loving other people, it’s obvious that some are our true friends and others merely acquaintances; that some have our affection and bring us happiness more than others.[6] Bonds of family, civic fellowship and comradeship count and there are responsibilities to love, for example, our own spouse, parents, children and country.[7] Some we love with reverence, others with passion, some out of duty, others out of gratitude; and so on.[8] Love is not all of a piece!

But hold on: instead of saying love God more than people Jesus actually says love God and hate people; rather than saying love people more than things He says to give up all our possessions. That sounds extreme, especially since there are other passages in which He tells us to love our families, friends, neighbours, even enemies, and to use the things of this world well. Here we come up against the hyperbole typical of ancient Semitic languages: that the way you say ‘Love God before all else’ is to say ‘Love God and hate everything else’. They didn’t literally mean to hate everyone. Our strange sounding Gospel today is actually about priorities, about ordering our affections, not so we’ll be haters but so we can be better lovers.

There’s another lesson on loving in Jesus’ teaching today: that sometimes people or things can be obstacles to our loving well. When I see two young people in a café, who should be looking lovingly into each other’s eyes but who are instead staring at their smartphone screens, updating their Facebook profile or sending Instagram messages to each other, it seems to me that the device has become a major distraction. So much of the universe of things, and the human desire to accumulate and use things, can distort our relationships: think of bosses and workers just pursuing their own interests rather than caring about each other, or relatives fighting over an inheritance, or shoppers stampeding each other at the post-Christmas sales. If things can eclipse people, so in the world of people, we can be disproportionately attentive to some people and so neglect or fail others. And in this second sense we might say we must hate X in order to love Y: we must put aside whatever gets in the way of our loving well.[9]

Of course, it’s easy to get this stuff wrong, because we can be possessed by our own possessions or obsessed with particular people, our passions can be jumbled, our judgment clouded by emotion. And so our first reading today suggests we need a wisdom that comes from above (Wis, 9:13-18). That Wisdom comes to us in the person of Jesus Christ and as a gift of the Holy Spirit. Then, rather than choosing, as Marcus Aurelius seemed to think we must, between love of self and love of others, we will choose to love God first and through His wisdom order all other loves prudently and passionately.

Today we celebrate 40 years of a particular kind of loving, done through the ministry of the Ephpheta Centre for the Deaf and Hard of Hearing. The name comes, of course, from chapter 7 of Mark’s Gospel. Some people brought Jesus a man who was deaf and could hardly talk, and they begged Him to heal Him. Taking him aside He touched the man’s ears and tongue, looked up to heaven and with a deep sigh said to him, ‘Ephpheta! Be opened! I am the Word: hear me. I am Wisdom: speak me.’ And at once the man’s ears were opened, his tongue was loosed, and the people amazed (Mk 7:32-7).

The Ephpheta Centre has for four decades been giving a hearing to the deaf, a voice to the mute, reaching out to all the hearing impaired with the loving touch of Christ. It provides a chaplaincy team for the deaf in the dioceses of Sydney, Broken Bay and Parramatta, including religious and social services for the signing-deaf, oral-deaf and hard of hearing, and those who have lost hearing through age and industrial deafness. They visit  members of the deaf community in their residences, nursing homes, hospitals, even prisons. Today we honour and thank the Catholic deaf community for their example to us whose ears are fine but whose hearts make them hard at hearing God’s Word. Thank you for your example of Godly service and healing love. Let us all listen with our hearts to Christ’s call today, that those hearts may love boldly and rightly.

Welcome to St Mary’s Cathedral for the Solemn Mass for the 23rd Sunday of Ordinary Time, which coincides with Mary’s birthday: hence the delightful shrine in the front here.

This morning we also celebrate the 40th anniversary of the Ephpheta Centre for Deaf and Hard of Hearing People, founded by the Sisters of Charity in 1979 and now a special ministry of the Archdiocese of Sydney, supported by the Dioceses of Parramatta and Broken Bay. It’s work includes visitation and support, sacramental and pastoral care, and advocacy on behalf of the deaf community. I acknowledge Fr Michael Lanzon, the Chaplain to Ephpheta; David Parker, the Director; Liz McDowell, the Business Manager; and other friends of Ephpheta and the people it serves. To everyone present a very warm welcome!