Homily for Prayer Service after Archbishop’s Awards for Student Excellence 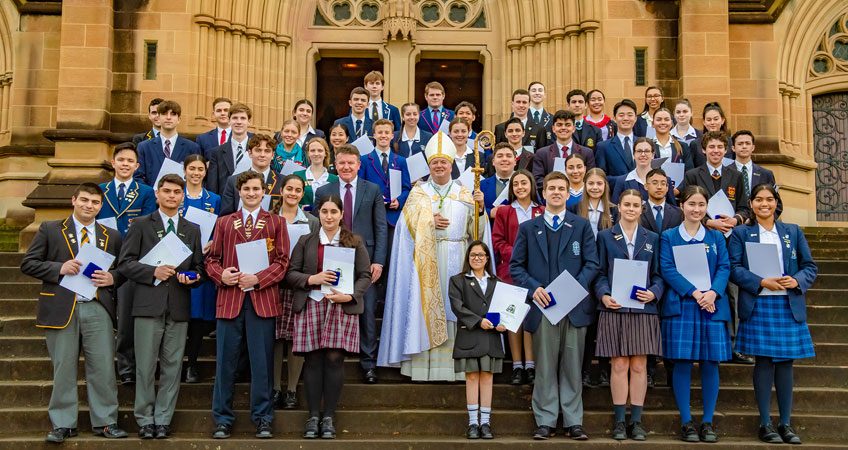 The winner of the Most Outstanding Entertainment or Comedy Program at the recent Logie Awards was… Lego Masters. The hit show’s host, comedian Hamish Blake, also took home the prestigious Gold Logie for his role as the face of the program. Lego Masters is now in its fourth season and as the accolades prove, it’s a real crowd pleaser. The show charts the ups and downs of high-end Lego construction. Teams of contestants are given thematic briefs and tasked with designing and constructing masterpieces, but with time and brick restrictions, as well as other obstacles to navigate. Their efforts are then scrutinised by head judge and co-host Ryan ‘The Brickman’ McNaught, one of only twenty-one certified Lego professionals in the world. The eventual winners are crowned ‘Lego Masters’.

Many of the works are truly mesmerising, the result of aesthetic vision and clever problem solving, hours of small, intentional steps, and strategic placement of thousands of tiny blocks. The latest Lego Masters, brothers Joss and Henry Woodyard from Newcastle, built ‘Kaiju Monster vs Mecha Crab’ for the final and it was rated by Brickman as one of the biggest and most technical builds in Lego Masters history.

I’m not sure how many of you have been in the past or are at present whizzes with Lego bricks, but one way or another you have produced bodies of work that are the result of vision, character, and many individual, intentional acts. Rather than Lego bricks, you worked with the raw materials of faith and charity, service and generosity. The first achievement that has made you worthy of recognition as a Spiritual Lego Master is the many people you’ve helped and lives you’ve influenced through your actions. I was delighted to hear of ways each of you applied your gifts for the betterment of local communities and the building up of God’s Church. Among you are youth group leaders, altar servers, lectors and extraordinary minsters, cantors, musicians and prayer leaders,, catechists, social justice advocates, fundraisers and helpers of the poor, homeless, forgotten, disabled and more. I was enormously impressed and proud of each one of you as I heard the citations read by your classmates.

As pleasing as were your spiritual equivalents of ‘Kaiju Monster vs Mecha Crab’, I was equally elated today by a second fruit of your work: the character you demonstrated but also chose to cultivate through those deeds. In our epistle St Paul compares you with athletes in training (1Cor 9:16-27). And so others today testified to the results of your training: it has made you gentle, caring and humble; generous, expecting nothing in return; role models of living out the teachings of Jesus; young people enlivened by the Holy Spirit, passionate about sharing your faith, generous in putting others first, energetic in making a difference. Almost to a tee you were described as exemplary Christian leaders, which is natural given that Christ showed us true leadership is about selfless service of others, especially the least among us.

To be sure, you are gifted and determined, but you also know you would not be or do what you have without others—as the Woodyard brothers generously acknowledged when they received their title. You know that there are hundreds of equally deserving young people out there and that, while enthusiasms such as yours may come from within, they are also the result of the influence of your families, parishes and perhaps especially your fine Catholic schools. You in turn have influenced particular others and your whole school community for the better, and I count that a third fruit worthy of accolade, as well as an indicator of other fruit-farmers worthy of our grateful recognition. On behalf of all our Award recipients I want to thank our families, teachers and fellow students for all your hard work in raising up young people of faith, and character, ideals and action. You are rightly very proud of them today, as they are grateful to you for the support you have been for them in their noble endeavours.

My young friends, today we recognise what you have done to build our Church. You haven’t received a fat cheque and a glorious trophy like the winners of Lego Masters. But as St Paul said in our epistle, the joy of preaching the Good News of Jesus Christ by word and deed is reward enough. However, you are now on the cusp of a new chapter in your lives. The tiny blocks that have been laid over the last twelve years and that has developed into your masterpieces of service will now be applied in new places. I pray that you will bring the face and hands of Christ to the different communities you will soon be part of, be it work, tertiary study, travel, friendships, volunteering, whatever. As Jesus’ disciples, you will be torches for the light of God’s love and goodness for others to see. Our world today needs the courageous witness you have already demonstrated and so I encourage you to continue to build your masterpieces, and never stop laying down blocks of faith, hope and love where-ever you go!

Congratulations and God bless you all!

Welcome to Cathedral Hall at St Mary’s Cathedral, the Mother Church of Australia and your church, young Catholic Australia. I am always delighted to present the Archbishop’s Awards for Excellence to the outstanding students from each of our Catholic secondary schools, systemic and congregational. It is with joy that we come together to recognise and congratulate the leadership and witness that you and other young people have given in our schools—your role, in fact, in the mission of the Church to bring the Gospel of Jesus Christ to our city in the twenty-first century.

The announcement that our Queen died overnight invites our consideration of the example of Christian leadership that she gave us for the past seventy years. While she was not born to rule, posterity will record her reign as a benchmark against which leaders will be judged for generations to come. Queen Elizabeth II will be remembered as a model of public service and dedication to duty. Her Majesty’s calmness under pressure, ability to comfort her people and her steadfastness in the face of adversity have been a source of inspiration for our country since her coronation in 1953.

In her passing, we remember the Queen as a Christian who loved her Lord, spoke of her faith in her Christmas messages, attended Church, prayed regularly, and treated with great courtesy all those she met. As we reward the model each of you awardees has been to others, we see in our late Queen a worthy model to us all of life-long service and we commend her soul now to Almighty God.

I am pleased to acknowledge clergy and religious from the Archdiocese of Sydney, leaders from the Sydney Catholic Schools including Executive Director Mr Anthony Farley, as well as other directors, principals, staff and students from all our systemic secondary schools; and representatives of the congregational schools. But of course, the most important welcome is to you, our recipients, with your fellow students and proud family members.