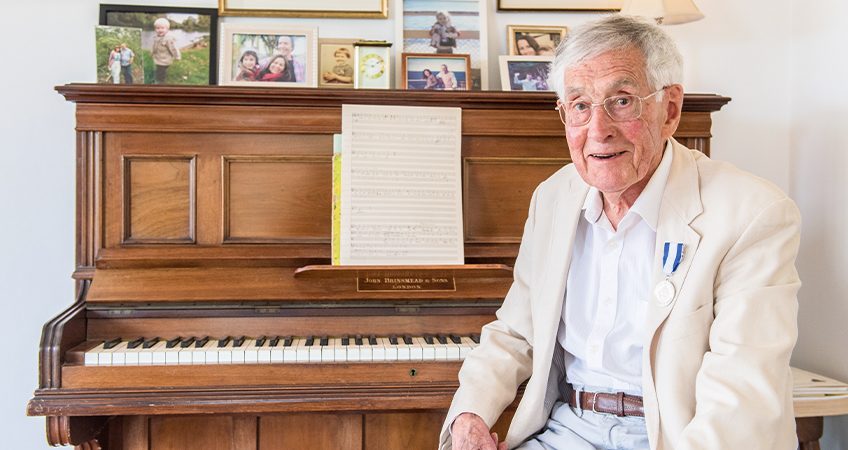 In 1967 a rather precocious young Anthony Fisher complained to Sr Mary Eucharia RSM that the new hymn she was teaching us—Sr Miriam Therese Winter’s “I saw raindrops on my window: joy is like the rain”—seemed barely to mention God. In response Sister offered us a better hymn: she taught us Richard Connolly and James McAuley’s ♪♪ Seek, O seek the Lord, while He is near, Trust Him, speak to Him in prayer, and He will hear. ♪♪

It taught the seven-year-old boy to seek the Lord, trust Him, and speak to Him in prayer; that He would be with me in my life, protect me from snares and falls, strengthen my loving, and direct me in my calling. God used that hymn, and others such as ♪♪ In Faith and Hope and Love, Holy Father God of Might, and By Your Priestly Power O Risen Lord ♪♪ to direct me in my calling and no doubt many others. Those of us who grew up on the Living Parish Hymn Book were sustained by hymns such as Where There is Charity and Love, Father We Praise You, May This Lenten Discipline, O Jesus Crucified, Sing a New Song, Help of Christians Guard This Land, Jesus in Your Heart We Find, and By Your Kingly Power—to name a few of Richard’s gifts to us, along with his Masses such as the one we hear today.

So from the beginning Christians have been people of song, an Alleluia people. “Sing the joyful Easter cry,” the musician said, “Let all times and peoples listen: Death has no more victory. Sing Christ risen.” To which the poet responds, “By your kingly power, O risen Lord, all that Adam lost is now restored: in your resurrection be adored.”

To devote one’s life to “psalms and hymns and spiritual songs” is to serve a true vocation. And to join in that heavenly music, our Epistle and Gospel teach today, requires not cleverness and learning so much as faith and love—without which we are “simply a gong booming or a cymbal clashing” (1Cor 12:31-13:8; Mt 11:25-30). If we wish to make music forever with God and the saints in heaven, we should start now, making of our lives a hymn of faith, hope and love.

Richard Connolly understood the importance of God’s love as experienced in his family and expressed through words and song. He spoke of his fruitful collaboration with the poet, James McAuley (1917-1976), in the most humble terms, giving McAuley most of the glory for their joint work and describing his music as merely clothing for the corpus within. But Richard’s role was much more than dress ups for someone else’s ideas.[i] His genius was to put words of beauty and theological depth to music worthy of that beauty and depth, underscoring and expressing the spiritual significance. Through the Sacred Liturgy this served both God and people and brought God and people closer together.

In composing music that supported the actual participation of the faithful in the mysteries, Richard enabled people to commune with God, with the earthly congregation singing with them, and with the cosmic congregation of angels and saints which the Scriptures describe as heavenly choirs. His paternal grandmother was first cousin (once removed) to one already there, St Mary MacKillop,[ii] and he wrote for another who would be, Pope Paul VI, both for the Randwick racecourse Mass and his grand reception here at St Mary’s Cathedral. He wrote also for other popes, prelates and people.

One of those for whom he wrote was Pope Benedict XVI, who thought that amongst the most effective means of spreading the faith are the saints and the arts that both spring from the Church’s womb.[iii] Through the faithful sharing of his gifts, Richard joins the company of the saints and those whose artistic contributions help us better experience the beauty of God’s love. The Church here in Australia is the richer for it and forever grateful for Richard Connolly’s choice to invest himself in her spiritual and artistic treasury. As we pray for his eternal rest may he now join the choirs in heaven, perhaps in singing some McAuley-Connolly hymn:

♪♪ O lead us, Master, by your saving grace,

To where the blessèd glory in your sight;

There let us see and love you, face to face,

Gathered once more in everlasting light.

Where there is charity and love,

There the God of love abides. ♪♪

[ii] These details come from Richard’s unpublished autobiography (the subtitle is ‘In praise of teachers and others’), 5.

Introduction to the Pontifical Mass of Christian Burial for Richard Connolly
St Mary’s Cathedral, Sydney, 19 May 2022

Welcome to St Mary’s Cathedral in Sydney to the Pontifical Mass of Christian burial for Richard Connolly (1927-2022). A prolific composer, he touched the lives of many through his contributions to the arts and the national broadcaster. But his richest legacy will surely be the corpus of Church music which he gave us. Our Mass today will be sung by the St Mary’s Cathedral Choir and be largely Richard’s own works: a fitting tribute to Richard no doubt, but his chance to speak some last words and songs to us.

Richard’s contributions came at a time of transition in the culture and renewal in the liturgy. Much that others offered as sacred music in that period was neither sacred in its text and style, nor good music. Richard demonstrated that it is possible to compose contemporary hymnody in English that raised the mind to God and the things of God, thrilled the heart and the senses, and enabled that ‘actual participation’ to which the Vatican Council called us. He understood this task as an act of faith and vocation.

As we gather to pray for Richard’s entry into eternal life, I acknowledge his family who are with us here today or joining us through livestreaming from Spain, France, the U.S. and elsewhere: his widow Cynthia, their son Hugh and daughter-in-law Jessica; and also his Jennifer and their children Christopher with Dominique, Helen with Mike, Jeremy, Tony with Joanna, Katie, Millie, Polly with Carl, and Suzy.

His siblings John, Thomas, Margaret, Elizabeth and Michael, with their families, and joining us from heaven His parents George and Madeleine, and his siblings Fr George and Frances. To the extended family, and Richard’s many friends, colleagues from the music world, fellow parishioners and admirers: a very warm welcome to you all.