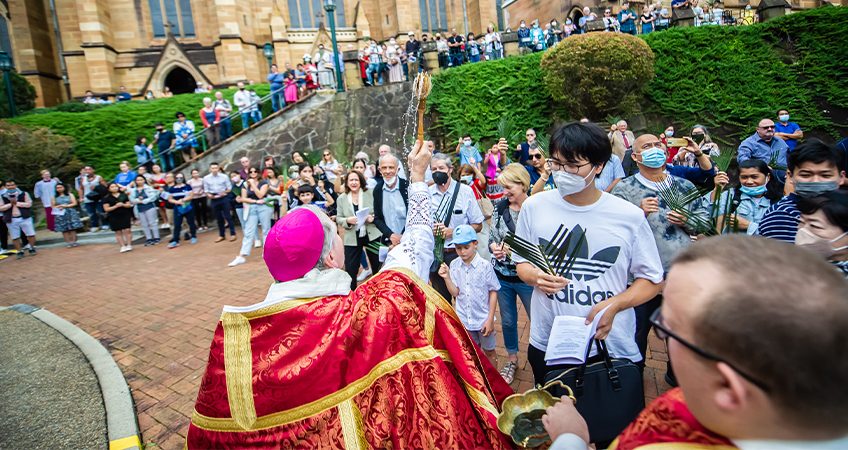 Not too far from the Colosseum and Forum, at the summit of the ancient Via Sacra or Holy Street in Rome, stands a 15-metre-high arch. ­ The marble monument was constructed in 71 AD by the Emperor Domitian to commemorate a victory, the year before, of his older brother and predecessor as emperor, Titus. Following a rebellion in Judea, Titus had besieged, captured and destroyed Jerusalem, including the Second Temple, so fulfilling a prophecy of Jesus four decades before (Mt 24:1-28; Mk 13:1-23; Lk 21:5-38).

­On the exterior of the Arch of Titus are illustrations of these exploits, including a depiction of Roman soldiers carrying away the sacred menorah from the Jerusalem Temple like a trophy. On the inside of the archway is the image of Titus ascending to heaven aback an eagle, having been granted divine status by the Roman Senate.[1]

The monument served as a kind of city gate through which any victory procession might enter. These were no ordinary parades: they were dramatic spectacles, full of pomp, opulence and fervour. The hero would be draped in purple and gold, with a laurel on his head. The spoils of victory would be paraded through the streets, including artworks, exotic animals, and treasures ransacked from the conquered people. Unfortunate captives were exhibited naked and in chains, and later sold as slaves, ransomed or executed. Huge crowds of Romans came out to cheer and the entertainments sometimes lasted for days![2]

Modernity has its parallels: think the ticker-tape parades for political, military or sporting heroes, or a Moscow, Beijing or Pyongyang march-past complete with goose-stepping armies, tanks and missiles going around the block to join the procession again and make it look longer. ­We even have our equivalent monuments, like Berlin’s Brandenburg Gate built in 18th-century, or Paris’ Arc de Triomphe erected by Napoleon in 19th, or the even more megalomaniac one built by Kim Il Sung in 20th century Pyongyang. It seems crowds love a triumph and heroes don’t mind the glory…

­But what’s going on today with Jesus’ entry through the arched gate of Jerusalem? There are parallels with a Roman triumph: a procession erupts on the Via Sacra andthe route is strewn with cloaks and palms. The crowds cheer and jeer, hailing Jesus with ‘Blessed is the King who comes in the name of the Lord!’ (Lk 19:28-40 at v.38) Even at His trials He is referred to as king (Lk 23:2,3,36,42); to mock this kingship the soldiers vest him in ‘a rich cloak’ and put a laurel on his head (Lk 23:11; Mt 27:29); and to the annoyance of the Jewish authorities, the Governor tweets that this is the ‘King of the Jews’ (Lk 23:38). And, as in the Roman processions, the defeated, enslaved and soon-to-be-executed will be displayed also.

Yet things are back-to-front. The victor arrives not in motorcade but on a lonely colt, with a motley crew of apostles as courtiers. And it’s the very same champion who is soon after dragged through the streets for public humiliation, stripped and executed. There’s nothing here for a Titus, Napoleon, Kim or Putin.

Titus engineered titles for himself such as ‘general’, ‘emperor’ and ‘god’. ­No-one imagined Napoleon was divine but he managed to claim the other two titles, to recover much of Titus’ empire, and even to dress up as a Roman emperor with a laurel on his head. Kim Il Sung named himself ‘Grand Marshall’ and ‘Eternal Leader’. And Putin is now President for Life, having engineered more decorations and awards for himself than you could poke a stick at, including having a mountain named after him!

Compare Jesus. Before holy week, when people called Him ‘king’, ‘messiah’ or ‘the great’, He resisted.[3] He eschewed titles, earthly power, wealth. He preferred the company of down-and-outs to the bold and beautiful. He put proclaiming the truth above safety and comfort. And He taught us to achieve greatness by assuming the humble status of a servant (e.g. Lk 22:26; Jn 13:1-20).

In typical Jesus fashion, the entry into Jerusalem upsides-down our conceptions of success and failure, power and glory. And like so much of our faith, it only makes sense in the context of the cross and empty tomb: the story Paul tells of a divine-king who didn’t cling to His status but poured out His divinity to assume the condition of a human being, then poured out His humanity to assume that of a dying slave; the story of one who, having been brought so low, was raised up upon the cross, raised up from the tomb, raised up into the heavens, raised above every being so our knees should bend at His very name (Phil 2:6-11).

Why a victory parade before there is anything to celebrate? Well, think of Jesus being anointed by a woman, as if for burial, even before He’d been arrested and executed. Think of Him trans-figured as pure light, months before his glorious Easter. And this morning another subversive premonition: here comes our servant-king glorified not by a marble arch but by the terrible wood of the cross on which hung our salvation.

Blessed is this King, who comes in the name of the Lord!

Jesus, remember me, when you come into your kingdom!

[2] For the Glory of the Empire? The Roman Triumph Explained (thecollector.com)