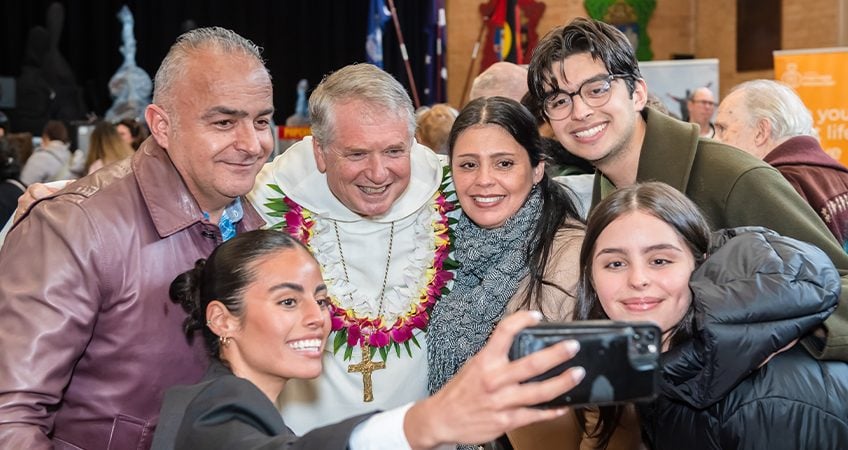 The Martin family story has all the ingredients for a binge-worthy Netflix series. Ambition, success and failure, heartaches and joys, fateful encounters and divine blessings, a family of heroes, it even had the valleys of Normandy as a beautiful backdrop! Yet ironically, neither Louis nor Zélie thought much about romance or family growing up. Both wanted to be consecrated religious. Louis tried to join some Swiss monks, only to find his ignorance of Latin was a dealbreaker, and so was forced to return to his trade as a watchmaker. Zélie tried the sisters of St Vincent de Paul only to get a very clear No, and so, like Louis, she dusted herself off and established herself as a lace-maker.[i]

Their paths fatefully crossed one day on a bridge when Zélie heard an inner voice whisper: “This is the one I have prepared for you!” Three months later, but only after stalking the nineteenth century equivalents of Louis’ social media accounts, Zélie married him at the Basilica of Notre Dame in Alençon. And so, whatever their plans for God, God had plans for them: they had a family to raise! There would be nine children in total. Of the five girls who survived infancy, all entered the convent, and one was destined to be perhaps the most popular saint of modernity—if the number of statues raised in her honour or crowds that reverence her relics are anything to go by. Though her self-designation was as a nobody, this “little flower of Jesus”, Thérèse from Lisieux, ended up a saint, patron of the missions and doctor of the Church! Her older sister Léonie is a Servant of God awaiting canonisation,[ii] and the parents have now been raised to the altar as saints also. So it was quite a family!

What was their secret? Some say: “We’ve done all we could to build a Christian home and pass on the faith. We took the kids to church and put them through Catholic schools. But they don’t practice anymore. It was easier in the old days.” Maybe. But the Martin family had no easy ride. Four children died in infancy which, even if it was common then, was still a terrible grief. Zélie succumbed to breast cancer aged 45, forcing Louis to sell the business, relocate his daughters to a farm at Lisieux, and be both father and mother. St Thérèse was tormented by awareness of her own shortcomings, by doubts about God’s existence, by misunderstanding within the convent, and by tuberculosis which slowly devoured her flesh and bones till she died at 24. On her death-bed she said, “I’ve reached the point of not being able to suffer any more: all suffering is now sweet to me.”

Yet for all the suffering in the Martin family, they never wavered in faith. They lived after the pattern of Paul’s charge to us today, to “Serve one another in works of love, since the whole of God’s law can be summed up as love” (Gal 5:1,13-18). Their home was ‘a domestic church’, a home church, where prayer was normal, where the Word of God and sacraments were treasured, where attentiveness to God’s love commandments was daily life. It’s been said that those who live with a saint are martyrs: it’s not easy living with someone whose almost perfect. Even in the Holy Family, there are tensions.[iv] What the Martins grasped was that the family is part of God’s plan for creation, not something to be idealised but a crucible for learning virtues, as much by rubbing up against each other as by imitation, and a place for learning love by experiencing it or yearning for it when it is deficient. They believed that if God is love (cf. 1Jn 4:8), to be a godly family is to be one always striving to be animated by love.

When he inaugurated the World Meeting of Families back in 1994, Pope St John Paul II said that families are a living image of the love of the Trinity.[v] The outpouring of love between the persons of God and the creative-redemptive love-acts of those persons in our world, is proper also to human relationships, beginning with our families. Not that Karol Wojtyła had an easy family life: his mother Emilia died when he was only eight; his sister Olga died before he was born; and his beloved older brother Edmund succumbed to scarlet fever. He was a teenager when the Nazis came and he lost his father before they were replaced by communists. So his love for the family was as much a love of what was missing as for what he experienced, but something his faith told him we must aspire to and share where we can.

John Paul called the family a school in charity, but the word might also be translated gymnasium. It’s a place for training our emotional and spiritual muscles, and like all muscle-building that requires stretching, even little rips, before new muscle and skills are developed. It’s the place for small daily acts of love, Thérèse’s “little way”. If we learn at home to be generous, forgiving and compassionate, we’ve learnt life lessons upon which our own moral-spiritual health and the health of our relationships will depend, but also the health of our whole community and Church. Families, in their gifts and challenges, are a constant reminder that we are fundamentally relational creatures. We need others, to love and be loved, if we are to thrive.

Of course the family as a domestic church is about more than ordinary human virtues. It is also the place where we encounter God through faith, where we learn about Jesus and following His way—as commanded in today’s Gospel (Lk 9:51-62)—and where we learn to pray and cultivate an inner life. The seeds of God’s word are first planted in our families, and parents are called to be the first teachers in the faith.

Modernity expects less of families. They are places of co-habitation, shared resources, occasional interaction. Governments and institutions gradually strip away their functions, incentives and protections. A hyper-individualistic culture says we don’t really need them, and discourages the self-sacrifice, compromise, piety and sense of duty upon which families are premised. The best antidote to this, according to Pope Francis, is the Holy Family of Nazareth.[vi]

Like the Martin family, they had their fair share of challenges: misunderstanding, fear and shame, persecution, homelessness, and early death: they knew it all. Yet still they trusted, in God above all, and in each other. On this World Day for the Family we commend all our families, with their gifts and wounds, to the Holy Family’s protection and to God’s creative and healing love.

[iii] On whom see: “Honoring holy motherhood: The saint who was the mother of five incredible saints,” ChurchPOP 10 May 2019; Ferdinand Holböck, Married Saints and Blesseds (Ignatius Press, 2002), 56-66; Meg Hunter-Kilmer, “Meet the family and their friends who gave the Church at least a dozen saints,” Aletheia 25 May 2017; Vincent O’Malley, Saintly Companions: A Cross-reference of sainted Relationships (Alba House, 1994); Anna Silvas, Macrina the Younger, Philosopher of God (Turnhout: Brepols, 2008). The principal source for the lives of most of these is: St Gregory of Nyssa, Life of St Macrina the Virgin and his Panegyric for Gorgonia.

Welcome to St Mary’s Basilica in Sydney for this morning’s Solemn Mass of the 13th Sunday of Ordinary Time and the 10th World Meeting of Families. This time around that event is on a reduced scale in Rome itself. Though we are represented there by some Sydney and other Australian families, the Holy Father has asked for more local celebrations given the complexities of travel and Mass gatherings at present. Together with families across the globe and with our Church as one big ‘family of families,’ we recognise the gift of the family as the first cell of society and the “Domestic Church.”[i] The pandemic and lockdowns have highlighted the importance of families for the health of individuals and communities. But our theme ‘Family love: A vocation and path to holiness,’ draws attention to the family’s other role of bringing us closer to God.

My friends, you will have seen in the news that the U.S. Supreme Court has reversed the ruling in Roe v Wade which fifty years ago invented a “constitutional right” to abortion to be found nowhere in the constitution. The result of that decision was a terrible spiral in abortion rates and the loss of tens of millions of human lives over five decades. The new ruling returns authority over these matters to the state parliaments as in Australia, and so to the electors. Hopefully they will do better at supporting every pregnant woman so that abortion is once again the unthinkable thing it should be—and so give a good lead to the rest of us. At the concluding Mass for today’s World Meeting of Families, the Holy Father adverted to all this, talking about the terrible waste of human life due to the abortion pandemic and the need for the family to be a sanctuary for life.

Dear Families, in celebrating this joyous occasion of the Tenth World Meeting of Families, I warmly invite you all to join us at the Festival of Families taking place right after Mass just outside the east end of the Cathedral in the College Hall Precinct. There will be stalls related to faith and family, as well as food and drink, entertainment for the kids, coffee for the Mums and Dads, Grandparents and friends, music, raffles and more. Let’s celebrate together the gift of our families and our hopes for them by gathering if we are free to do so.