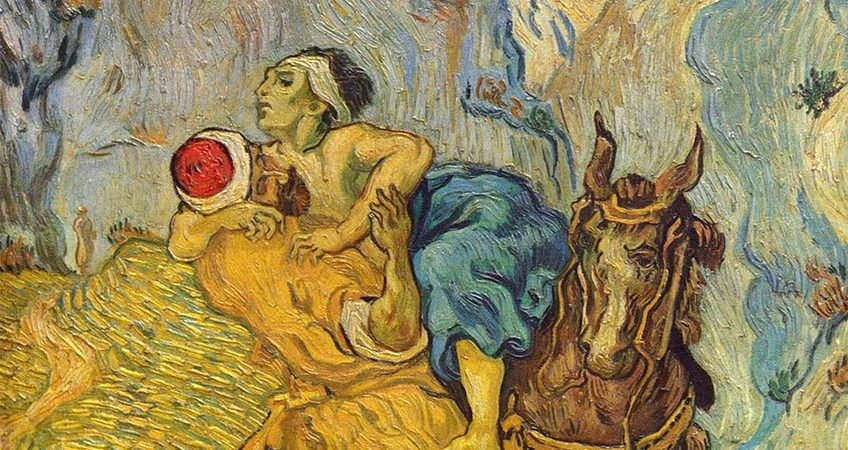 The Aussie writer-director Baz Luhrmann is an undeniable titan of his craft. Four of the top ten grossing Australian films of all time are by him,[i] and his latest biopic, Elvis, is well on the way to being another smash hit. His style is utterly distinct: vivid eye-catching costumes, dizzyingly fast-paced action, operatic scores, sprawling plots, surreal elements and an A-list cast. Intentionally over-the-top, his films are a feast for the senses and always entertaining.

As well as his skill as an original story teller, Luhrmann wonderfully reimagines other people’s stories. His take on F. Scott Fitzgerald’s classic, The Great Gatsby (1925, 2013), filmed at the old seminary in Manly and starring Leonardo di Caprio,is a prime example. Ten years before that,Luhrmann gave us his modern take on Romeo and Juliet, with a rather younger di Caprio and Claire Danes cast as the star-crossed lovers. Elizabethan garb was replaced by twentieth-century street wear, Verona Italy with Verona Beach California, and the Montagues and Capulets were rival mafia mobs. Yet Luhrmann was faithful to the original play.

In his opening scene Shakespeare’s brawl on the streets of Verona is resituated in an urban petrol station. The Montague boys and their Capulet counterparts stare chillingly at each other and hurl insults as their hatred simmers. The scene captures a central aspect of the tale—that these warring houses despise each other simply for being ‘other.’ They draw their ‘swords’—in this case 9mm Glocks—for no other reason than that they are traditional enemies, obligated to loathe each other.

Family feuds, tribalism, ethnic hatreds and polarisation, expressed as cold seething or hot conflict, weren’t unique to the Elizabethans or the mafia. These go all the way back to Cain and Abel, and the Tower of Babel (Gen 4:1-26; 11:1-9). And long before the fictional rivalry between Montagues and Capulets, there was real rivalry between the Judeans and the Samaritans.

Their beef traces back to the division of the kingdom of Israel in the tenth century BC Samaritans were Northerners descended from the tribes not deported by the Babylonians, who called themselves ‘Israel’, believed theirs was the purer form of the ancient faith, and had their capital in Samaria on today’s ‘West Bank’. Their sworn enemies were the Southerners from Judah, whose ancestors returned from Babylon, whose religion was Judaism, and whose capital was Jerusalem. Both believed they were God’s chosen people and descendants of Abraham but over time their cultural, political and religious differences hardened into a stubborn, visceral dislike…

That’s background to the famous parable of The Good Samaritan (Lk 10:25-37), which Baz Luhrmann is yet to turn into a movie. One of Jesus’ long-term projects with his disciples was to expand their sense of whom they should love and how. Love family, friends and tribe, as is only natural, He taught, but with a more generous sense of who are our brothers and relativising these loyalties by putting God first.[ii] Love God and neighbour, of course, as God commands, but with an expanded sense of who is our neighbour that includes not only those cheek by jowl with us, but even neighbouring tribes[iii]—a love bigger than the categories of ‘friend’ and ‘foe’.[iv] Eventually Jesus would give a new love commandment: to love as He had loved, if needs be giving up your life for the beloved.[v] The story of the Good Samaritan is part of this ongoing catechesis and formation in loving.

Jesus’ kind of loving can be costly. Tribal loyalties might have to be put aside, including the sense of entitlement and grievance. Contrary to the latest risk appetite statement, priest and deacon might have to chance ritual contamination and medical hazard as they confront people’s needs. Still harder, we might have to let go of some ego and security—the desire to put all our resources into ourselves. Jesus’ kind of love, like that of Romeo and Juliet, lets go of all this and sees the sheer lovability of the other.

“Obey the voice of the Lord your God, keeping his laws and commandments,” Moses says today (Dt 30:10-14). In ancient religions people often did good out of duty or fear, and a certain holy fear before the divine makes sense. But Moses then adds something different: “Return to the Lord your God with all your heart and soul… for his Word is very near to you, in your mouth and heart.” The Law, then, is not just rules of the Jewish club or impositions of an arbitrary spirit. It’s something deeper in us—in our hearts and minds—and it shines light on who we are. We obey the commandments, not primarily to keep God happy but to become all we are made for, images of God (Gen 1:27).

Today’s Good Samaritan story is occasioned by Jesus’ interrogation by some canon lawyers who fell well short of this. For them you observe the Law because it’s the law, and the more you were seen to obey, the more self-righteous you can feel and the more deserving you are of public respect. Jesus had some choice words for these guys, calling them ‘whitened sepulchres’ (Mt 23:27)—externally pristine but dead and corrupt within.

Our parable has a Samaritan, the one most likely to ignore the plight of a Jew mugged and left for dead, being moved by compassion to see the victim not as ‘other’ but as another self. This man is not just externally righteous: an inner pity compels him to put aside prejudice and calculation, and will only the good of the other. Jesus’ love is like that. And our Plenary Council this week past has exemplified the power of that love to draw together people of very different backgrounds, temperaments, theologies and aspirations, as one family of the Church.

Some of the early Church Fathers interpreted today’s parable as an allegory of God’s love for us.[vi] They read the victim as all of us, wounded by the Fall, and the Samaritan as Christ come to rescue suffering humanity.[vii] It is an interesting take on the story, as it makes Jesus the outsider, estranged from us not just because of our personal disobedience but also the tribalism and accumulated animosities of the generations that are part of original sin. He comes to nurse us back to health with His sacraments of oil and wine: oil in baptism, confirmation, ordination and anointing, and wine in the Eucharist and the wedding banquet. The latest census tells us that less than half of Australians now identify as Christian and that nearly as many say they have no religion. The reaction to the U.S. Supreme Court’s reversal of Roe v Wade highlighted another deep divide in contemporary societies: that over values. The Fifth Plenary Council of Australia, just concluded, heard of other dividing lines between blue and red, Montague and Capulet, Samaritan and Jew, even within the family of the Church. Sometimes there are real differences of opinion, with no lack of good will on either side. All-too-often media, politics and academy—as well as human nature and culture—exacerbate such divisions. But followers of Christ, the new man, “first-born from the dead” (Col 1:15-20), must be Good Samaritans towards all those we encounter. And that kind of ‘practical ecumenism’ and hospitable care can be the basis of greater understanding and a more lasting relationship. Praise be to Him “who made peace by the blood of his cross”!

Welcome to St Mary’s Basilica in Sydney for the Solemn Mass of the 15th Sunday in Ordinary Time. Concelebrating with me today are some of our visiting bishops, here until yesterday for the Fifth Plenary Council of Australia:

To them and to everyone present, a very warm welcome to sunny Sydney! Today is Sea Sunday, the day set by many Christian churches to remember, celebrate, thank and pray for seafarers and their families. Seafarers work tirelessly on the high seas, bringing us more than ninety percent of the goods we need. The Catholic organisation Stella Maris supports seafarers’ welfare and provides pastoral care and hospitality. Details of how you might contribute are in the bulletin. In our first reading this morning Moses calls the people to return to the Lord God with all their heart and soul and to obey the Lord’s commandments. And so we begin our Mass by repenting of the times we have failed to do so…