HOMILY FOR THE FIFTH SUNDAY OF LENT, Year C 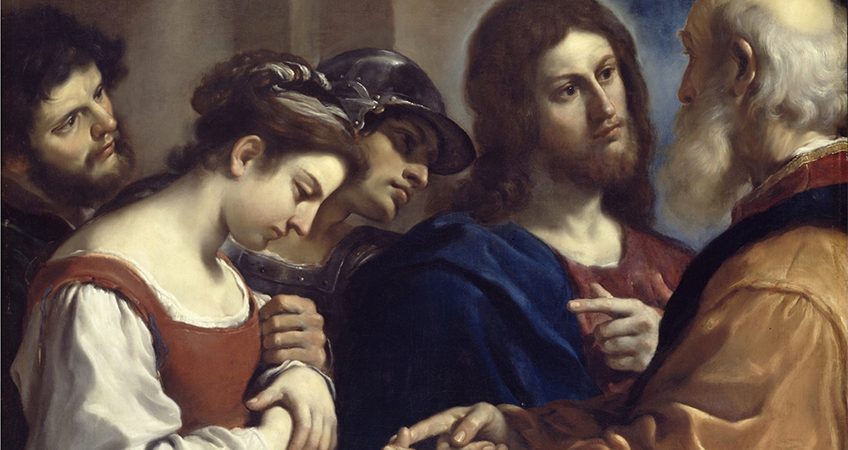 Archdiocese of Sydney · HOMILY FOR THE FIFTH SUNDAY OF LENT, Year C

In 1971 Japanese salesman Goro Hasegawa rebooted a popular nineteenth century board-game with the new name Othello, in homage to its black-and-white discs. Two players take turns laying down their counters on an 8×8 squared board; when one surrounds the other’s disc it is ‘captured’ by being turned over as the other colour; the winner is the one whose colour dominates in the end. Within a few years 40 million of these games had sold in 100 countries for $600M. World championships have been held since 1977, with the current champions a 14-year-old Japanese boy and an Indonesian-Australian woman.[1]

On the box we read the slogan: “A minute to learn…a lifetime to master!”—a slogan applicable to many games, sports, arts and sciences. We might pick up the rules of an activity quickly, but be miles away from grasping its ultimate goals and best game plans. In Othello as in life there’s a world of difference between the How, the Why and the What.

Applied to real life, we might take a minute (relatively speaking) to memorise the commandments, yet be too wooden and robotic, or half-hearted and inconsistent, too evasive and devious, or hard hearted and stone-headed, to be a truly great player. Think of the Pharisees as they are portrayed in the Gospels. They knew the rules of the game better than any. They’d studied the bible, commentaries, canons. They lived god-fearing lives. Paul was one of them, as was Gamaliel his teacher (Acts 5:34; 22:3); Nicodemus the Pharisee came to Jesus by night (Jn 3:1-21; 7:50; 19:39), and Joseph of Arimathea buried Him (Lk 23:50-56). Jesus was himself a respected teacher of the Law: even His critics, who thought His disciples played too fast and loose with Torah, made no such complaint against Him—at least not directly (Mt 12:1-8).[2] Indeed, on some matters, such as reverence for life, sexual morality, marriage and truth-telling, He was stricter than they were (Mt 5:21-37; 19:3-9; Mk 10:2-9). On more than one occasion He ‘out-lawyered’ them with arguments from their own sacred canons.[3] So Jesus was no hippy anarchist. He came, He said, not to abolish the Law but to fulfil it; not one jot or tittle would pass away “until it is accomplished” (Mt 5:17-18; cf. Jn 19:30).

So you might think He’d cut the lawyers some slack! Yet the rulebook-loving Pharisees were the favourite targets of His criticism. He identified their hypocrisy, not practising what they preached, but acting out of selfishness, malice or vainglory.[4] He named the empty ‘lip-service’ of their worship while their hearts were ‘far’ from God.[5] He thought they put undue burdens on people, shutting them out, neglecting what matters more.[6] He called them out as ‘blind guides’, ‘accursed fools’, ‘brood of vipers’, and ‘whited sepulchres’.[7] Jesus reserved some rather colourful cuss-words self-satisfied, legalistic phonies!

What was it about these guys that so got under Jesus’ skin? Imperfect as they were, they were trying. They studied the law of God, down to the letter. They were observant and only asked the same of others. Surely, they were doing God’s work!?!

Lucas Cranach the Elder, Christ and the Woman Caught in Adultery (1520), Fränkische Galerie

Well, look at the Pharisees’ performance in today’s Gospel (Jn 8:1-11). The keepers of God’s rule-book have caught a woman in flagrante delicto, in the very act of wrongdoing. They’re outraged on behalf of God, HHis holy law, her dishonoured people, the institution of marriage. The law of God was clear: such debauchees deserved to die (Lev 20:10; Dt 22:22).

But hold on: where’s her partner in this crime? If it were justice the Pharisees wanted, he’d be on trial too. But it’s Jesus they’re really after. They want to discredit Him as a corruptor of public morals. The woman is just bait. As the kangaroo court proceeds, He stands beside her, like her legal advocate, and in place of the man who should have stood by her. And the more His persecutors persist in trying to trap him, the more ridiculous they become.

Then comes one of Jesus’ most jarring one-liners: “Let the one without sin cast the first stone.” It’s a slap in the face to the judgmental Pharisees, who slip away one by one as their sins are doodled in the sand. It’s a slap also for a whole way of thinking. For the Pharisee the moral life was about obeying the rules of the game, of Torah. They mistook the boundaries for the trophy, the letter of the law for its purpose, the code for the skills of play. And this fed their pride, their sense that they were law-abiding while others were moral slobs. Two men went up to the Temple to pray, Jesus tells us: one begged God for forgiveness; the other talked to himself about his moral superiority (Lk 18:9-14). “Thank God, I’m better than the tax-collectors and sinners,” the Pharisee bragged, “those rogues and adulterers.” But Jesus had come for the lost sheep, coin, son; the sick heart and miserable soul. From now on, being able to recite from the moral rule book and observing it externally, while your heart is elsewhere, won’t cut it!

It’s not that Jesus is against God’s law: He was its advocate, indeed its author. It’s not that He’s soft on sin: His parting words today are a reminder to sin no more. But Jesus’ perspective is different. While the commandments might take only a minute to recite, living them takes a lifetime to express, a lifetime of conscience formation, trial and error, sin and repentance, confession and starting again—with better intentions, motives, models, character. A lifetime of growing in self-mastery and prudence, leaning on God’s grace. In the end, the Morality Game is about raising people up to being more truly images of God, rather than trying to catch them out as miserable sinners. So Jesus raises the woman up to forgiveness and new life, restoring her dignity as a child of God and her future as a possible saint. And what will make her a saint is not memorising the rulebook or even conforming externally to the commandments: her acts must now express and shape a good heart; and her good heart must direct and confirm her good deeds.

In our epistle today, the most famous Pharisee of all time, St Paul, offers some great advice as a recovering lawaholic. He knew better than most about the dead-end of trying to perfect ourselves by learning the manual, obeying it meticulously, trying to build our moral-spiritual muscles, and putting down everyone who doesn’t. It might stop you committing adultery but it will never start you on the road to being a great lover. Paul discovered he had to rely on a power greater than himself, on Jesus Christ, the Lent-time renovator of souls. He had to embrace whatever comes in the race of life, if needs be some share in Christ’s sufferings before sharing in His glory (Phil 3:8-14). Only a minute to learn but a lifetime to master: that’s the Christian experience of momentary conversion at Baptism, but giving life new horizons, not so much a rulebook as guardrails graciously given so we might spend our lives moving towards the perfection and communion of God.

INTRODUCTION TO MASS FOR THE FIFTH SUNDAY OF LENT, Year C

Welcome to St. Mary’s Cathedral in Sydney for the Solemn Mass of the fifth Sunday of Lent. Today we begin Passiontide, the final two weeks of Lent when we accompany Christ in His final journey to Jerusalem, to His triumphal entry on Palm Sunday next, to His Sacred Triduum thereafter, to His Last Supper and the institution of His sacraments and priesthood, to His crucifixion and burial, to His glorious Resurrection—all for our sake. As the Church renews her call to us all to make a good confession, we see a woman caught in adultery absolved by Jesus Himself. As we turn our gaze towards the salvific acts of the Lord’s passion, and draw close to Him with all our heart, we ask that He take our sins down into the tomb with Him that we might rise free of them with Him at Easter.