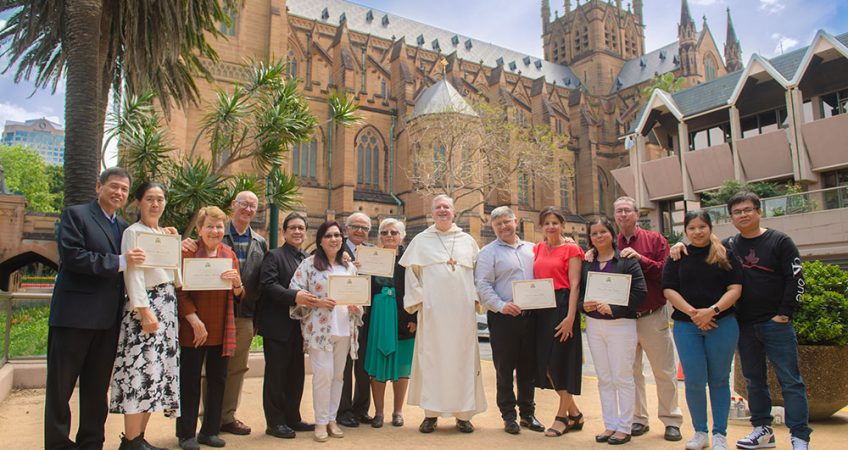 Marriage, of course, was bound to come up, in the document On the Liturgy (e.g. SC 77-78), as it’s one of the sacraments; in the one On the Church (e.g LG 11), as it’s one of the states of Christian life; and in the document On the Lay Apostolate (e.g AA 4 &11), as it’s where much of lay life happens. But where marriage received the most attention from the Council Fathers was in the pastoral constitution On the Church in the Modern World (e.g. GS 47-52) where the bishops said it had become “a particularly urgent problem” (GS 46).[1] Why?

Well, the Council Fathers knew that the well-being of individuals and communities depends hugely on marriages and families. That’s where most people find affection, support, fulfilment; it’s where children are procreated and reared; when it works, it’s “a school of deeper humanity”; and on it depends the continuation of the race, the development of those involved, and the peace and prosperity of society.

Yet theirs was the age of sexual revolution and the me-generation. The Council Fathers feared divorce, promiscuity, and confusion about the human person and morality were obscuring the meaning of marriage; that selfishness, hedonism and an anti-child mentality could undermine it; and that many marriages would break under the many contemporary pressures. Promoting healthy marital and family life would be one of the most prophetic and useful things the Christian community could do, not just for themselves but for the rest of society.

But the Church’s interest in marriage goes beyond its sociological function. Marriage may have existed pretty-well always and everywhere, but Christianity’s take on it is unique. The Council documents say it’s about vocation and salvation. Vocation—because it is a divine calling to an intimate, lifelong partnership, an abundant grace that enables that, and with effects on the character, identity and destiny of the spouses. It is about salvation, also, because it mirrors Christ’s total, faithful, fruitful self-gift to His Church, consummated on the Cross; it’s raised by Him to the status of a sacrament; it’s a place for affection and joy, but also for self-sacrifice and mutual sanctification. In making their home a domestic Church, spouses both live out their faith and transmit it to the next generation.

The Council spoke at what was a crossroads for civilisation, for secular society was increasingly adopting a very different conception of marriage. Christians knew marriage is the kind of union of a man and a woman that most often leads to children; that it’s supposed to be faithful, life-long, fruitful and sanctifying; and so it’s a benefit for the spouses and their family, Church and community. But for secular modernity marriage is a ceremonial celebration of romance and commitment; sexual complementarity, fidelity, longevity and children are optional and matters for negotiation; and all that is promised is revisable. We call both things marriage, but they are chalk and cheese. And only the first can be a sacrament of Christ’s relationship to the Church.

At the Genesis of creation God observed that it is not good for a man to be alone; he needs a woman as his helpmate (Gen 2:18-25). So, too, in today’s Old Testament reading we heard how old father Moses needed the support of a family; Aaron and Hur must hold up his frail elderly arms (Ex 17:8-13). On this account, marriage is about support, friendship, and so could be between any two people or in Moses’ case three! But with Christian faith we realise that this story of Moses is a foretelling of Christ with arms outstretched at the Transfiguration, and Moses and Elijah either side; a premonition, also, of Christ with arms outstretched on the cross, good and bad thieves beside him.

So there’s more at issue here than the practical support people can be to each other. For Moses, Aaron and Hur, as for Adam and Eve it’s about vocation, sanctification, salvation. The First Man and Woman were not just to be helpmates but to cleave to each other, be fruitful and multiply, fill the earth with God’s children. Though they didn’t yet have the language for it, their vocation was to holiness, to found a race that like them would walk with God in paradise. Marriage was to be a vehicle for this holiness—as in due course would be Priesthood, Religious Life, above all Baptism. By Christening and Confirmation we are called to be missionaries and martyrs, saints for our times, and to be this together, in communion, through marriage and family, Christian friendship and collegiality, belonging to and attending Church, above all receiving the sacrament of Communion.

Committing to anyone or anything for life seems a long time in a world where we change professions, employers, cars, houses, body image, and affiliations again and again. Sticking for so long to one person might seem to be inertia, lack of imagination or cowardice. Of course, the secular world still wants marriage, but it means something less demanding, less constricting, less sacred. Our Catholic wisdom is very different, because we know marriage is about vocation and salvation, sacrifice and sacrament, holiness and communion. It’s is one of the seven ordinary ways to get caught up into the life of God we call “sacraments”. It requires not inertia so much as perseverance, not will-power so much as divine grace received in prayer.

Our Gospel story of the Widow and the Unjust Judge (Lk 18:1-8) joins these two together. The God of our hopes and joys, griefs and anxieties wants us to knock at His door, to persist in our prayer, to keep seeking His counsel, grace, love. Sixty years ago the Second Vatican Council convened to teach us about marriage and many other things. That very year our diamond jubilarians, Gladys and Wilfred Peters, convened in holy matrimony, and have been teaching us by example ever since. We pray today for all married couples, for steadfastness in loving, giving and forgiving, for large-heartedness, self-sacrifice and holiness, until they join the great wedding feast of heaven.[2]

WORD OF THANKS AFTER COMMUNION

I reiterate my thanks to all those who took part in our annual archdiocesan Marriage Mass and Renewal of Vows. In particular, the tireless efforts of those from the Life, Family and Marriage Team for promoting and recognising this important Christian vocation in our Archdiocese. In appreciation of our newlyweds celebrating 20, 30, 40, 50 or 60 years of marriage, I invite them and their families to join me in my house after Mass so I can present them, on behalf of the whole Church of Sydney, with a certificate recognising their fidelity to their vocation.

Welcome to St Mary’s Basilica in Sydney for the Solemn Mass of the 29th Sunday of Ordinary Time. Today we celebrate the Annual Archdiocesan Marriage Mass. I welcome and thank David Harrison, Team Leader of the Life, Marriage, and Family Office, together with members of the team for their efforts in organising today’s celebration.

The real VIPs, however, are our married couples, especially those celebrating 20, 25, 30, 40, 50 or 60 years of marriage. My number crunchers advise that between these jubilarians alone there’s a whopping 1400 years of marriage! I’m pleased to acknowledge those renewing their vows today, particularly those married in this cathedral or those marking important jubilees: a very warm welcome to you all, and to your proud families and friends.