He was only 15 when the Nazis deported him and his family to Auschwitz. His mother and younger sister were killed on arrival. He felt his God and his soul died that day also, and all his dreams turned to dust. But the boy and his father were able-bodied and selected for hard labour. They were transferred to Buchenwald in Germany where the father died soon after. But the boy survived to be liberated by the US Third Army in 1945.[1]

Elie Wiesel (1928-2016) was relocated to France for rehab and there studied with Buber and Sartre. He worked as a journalist and published a memoir. He went to America, married, taught philosophy, and advocated for human rights. He was eventually awarded the Nobel Peace Prize (1986) and a knighthood (2006). His 40+ books addressed themes that had haunted him since the camps: faith and suffering, alienation and survival, love and responsibility, God, evil and death.

Wiesel thought that the principal cause of human suffering, the greatest threat to peace, and the true opposite of love, is not hatred so much as simple indifference.[2] In an address on ‘The Perils of Indifference’ (1999) given at the White House, he explained how easy it is to avert our gaze from victims, so they don’t interrupt our neat lives.[3] “It is, after all, awkward, trouble-some, to be involved in another person’s pain and despair.” But such indifference enables sins of neglect. It is also sinful because it treats the victim as of no consequence, their life meaningless, their anguish irrelevant. “Indifference reduces the Other to an abstraction,” so we can ignore the starving child, political prisoner, homeless refugee, the unborn at risk of abortion, or newcomer to our land.

Indifference is a sin: it is also a punishment, Wiesel explained, because while some anger is creative, indifference is always deadening. As much as the victim’s body, it kills the agent’s heart. 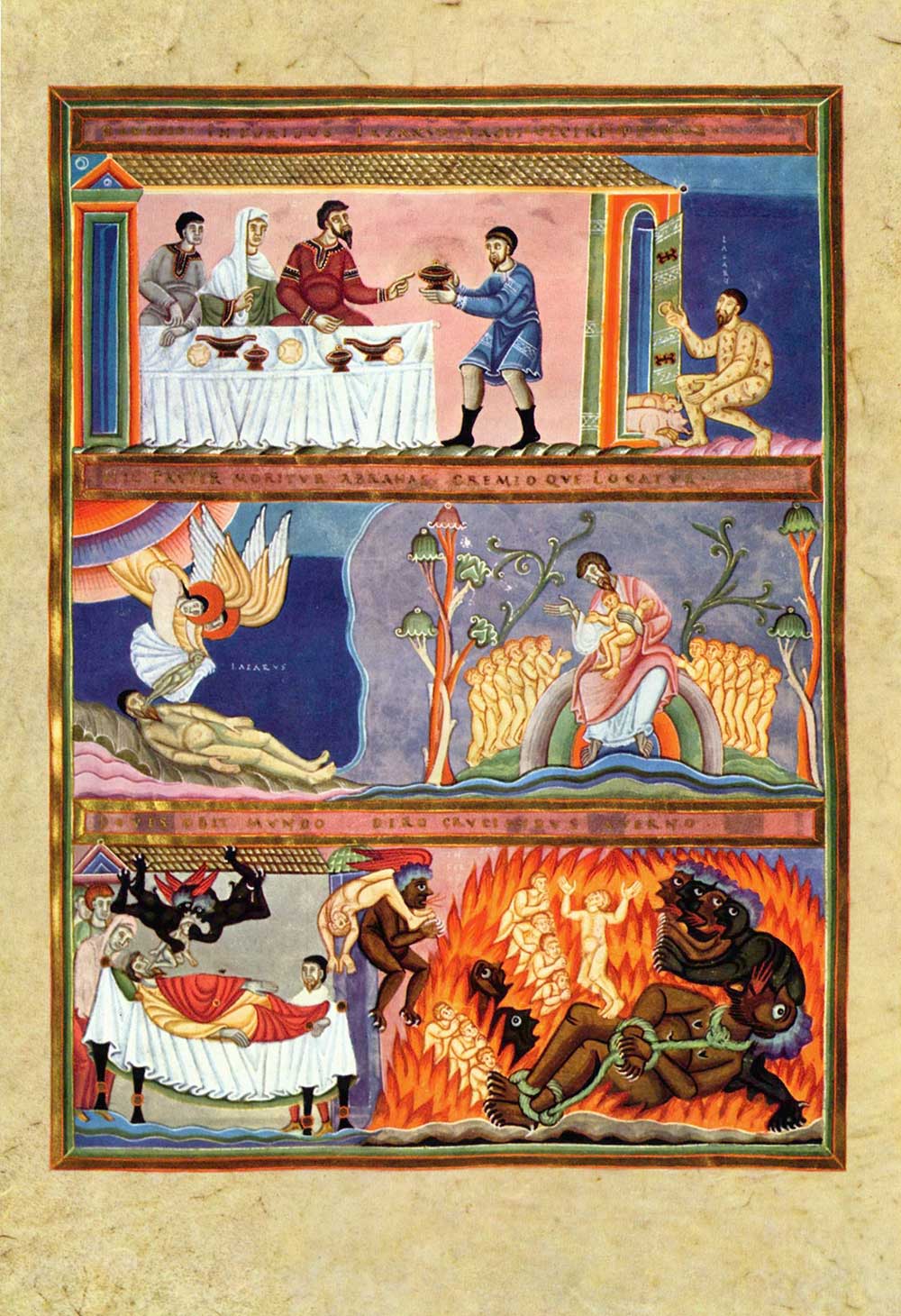 Long before Elie Wiesel, Jesus warned of the perils of indifference. A Rich Man had many good things come his way (Lk 16:19-13). Amos describes him as sprawling on an ivory divan, gormandizing on fattened calf, surrounded by wine, women and song(Amos 6:1-7). There’s a Poor Man at the gate, starving and ulcerated, to whom only bad things came. Now, Jesus is no party-pooper: in fact He loved to party, and so he does not disapprove of the man’s feasting as such. But how can you party while a neighbour is starving on your door, He asks? Why not invite him in? (cf. Lk 14:12-24; Mt 22:1-14) 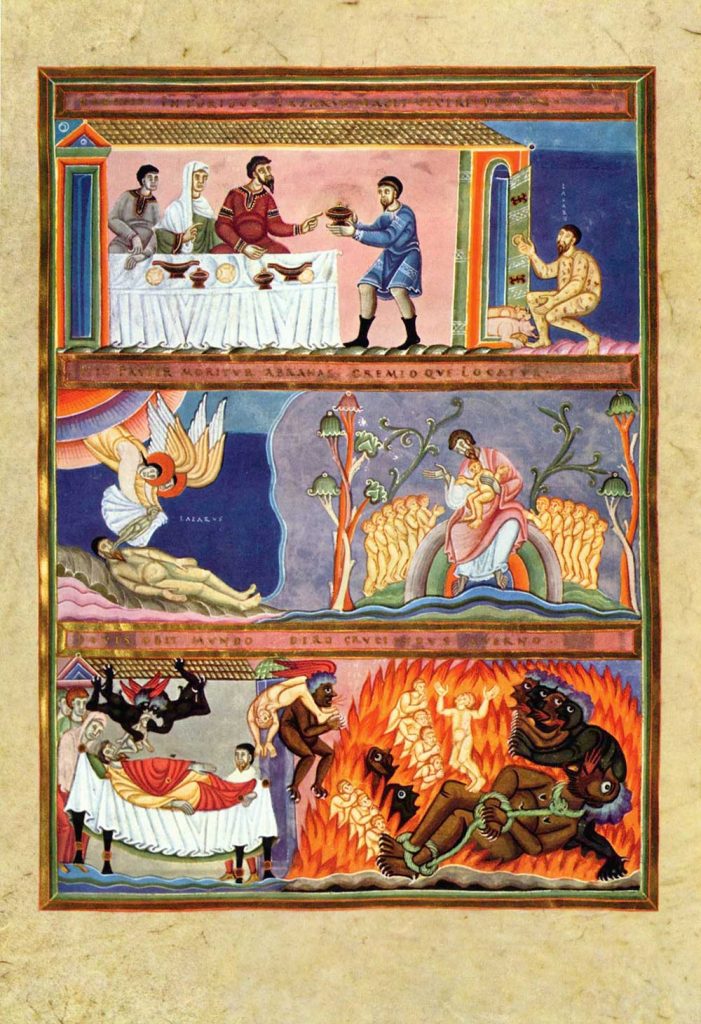 Well Dives didn’t. Now both men died. The Poor Man was carried away by the angels to the bosom of Abraham; not so the Rich Man. His unwillingness to recognise and care for Lazarus unsuited him for paradise.

Dives ends up in the other place, begging for relief. But he’s told there’s now a great gulf between himself and Lazarus. When he says “if only I’d known”, he’s reminded that Moses, Amos and the other prophets had warned Israel again and again…

The ’great gulf’ between heaven and hell is of course about the two radical possibilities for the afterlife. But it also recalls the gulfs we create and perpetuate between rich and poor, secure and insecure, homed and homeless. Our solicitude for others in this life, or neglect of them, has implications for eternity.

The Bible begins with friendship. When the Creator gets going, He intimates that there’s plurality and friendship even within Himself: He says “Let Us make…” not “Let Me make…”. And when God makes the human person in the divine image, He quickly notices that “It is not good for the man to be alone; he needs a helpmate.” The God-in-relationship makes humanity for relationship.[4] So friendship is in our spiritual DNA. Our social and ecclesial lives are about collaborating and serving each other, like organs of a body.[5] And our ultimate destiny is communion with God and others in the great banquet of heaven.[6]

To be indifferent to others, as if they don’t exist, or are mere abstractions, or have no purchase on us, is to fail to see God in them and to see another of myself in them. Worse than that, it denies the image of God in oneself, that at core we are made for love. St Catherine of Siena observed that God could have made us all self-sufficient. But He deliberately made us all deficient in one way or another, so we would need each other. Setting up great gulfs between us and others doesn’t just neglect them: it also neglects an important part of ourselves. We put ourselves in the isolation ward that is Hell, even before we die!

In today’s story Lazarus lies at Dives’ gate. So Dives can’t but have noticed him: he had to step over or around him every time he went out! But Dives was well-practiced in ignoring his neighbour’s suffering. Perhaps he told himself it wasn’t his fault. That it’s just the luck of the draw. That Laz had brought it on himself. Or that the poor man’s relatives should look after him or the government or charities. Whatever excuse he gave himself, it blinkered him to the other’s suffering and focused him on his own comfort only and that of a few favoured ‘brothers’. It’s the kind of thinking that got Amos and all the prophets right up to Jesus very worked up!

But we are not doomed to be like that. Paul tells Timothy today that “as a man dedicated to God” he should be “saintly and religious, faithful and loving, patient and gentle” (1Tim 6:11-16). Not just young bishops like Timothy: Paul thinks all Christians should be “full of faith and love”.[7] And Christ taught us to have a special care for the poor.[8] On this 108th World Day of Migrants and Refugees He says: don’t ask when you saw me hungry or homeless: you saw it in all the Lazaruses at your gate. Question is: did you greet me warmly and welcome me in?

[2] Elie Wiesel, Acceptance Speech for Nobel Peace Prize 1986 https://www.nobelprize.org/prizes/peace/1986/wiesel/acceptance-speech/; “The opposite of love is not hate, it’s indifference” https://quotesexplained.com/the-opposite-of-love-is-not-hate-its-indifference-elie-wiesel/

Welcome to St Mary’s Cathedral for the Solemn Mass of the 26th Sunday of Ordinary Time.

Yesterday we offered a Solemn Pontifical Requiem Mass for the late Queen, giving thanks for her life of unstinting service and commending her to the mercy of the King of kings. We also pray for our new King and his ministers.

Today is the World Day of Migrants and Refugees, an annual celebration instituted in 1914 by Pope St Pius X in response to the massive displacement of people by the Great War. In recent months millions have again crossed Europe and those remaining in Ukraine have received not-so-veiled threats of nuclear catastrophe. In other places, too, people are being driven from their homelands or have pulled up stumps in search of a better life for themselves and their children. With the rest of the Church, we pray that all those seeking refuge may be welcomed with a Christ-like hospitality. Conscious of the times we’ve failed to welcome the stranger and assist the needy, we repent of our sins…