HOMILY FOR MASS FOR THE FEAST OF ST PETER CHANEL 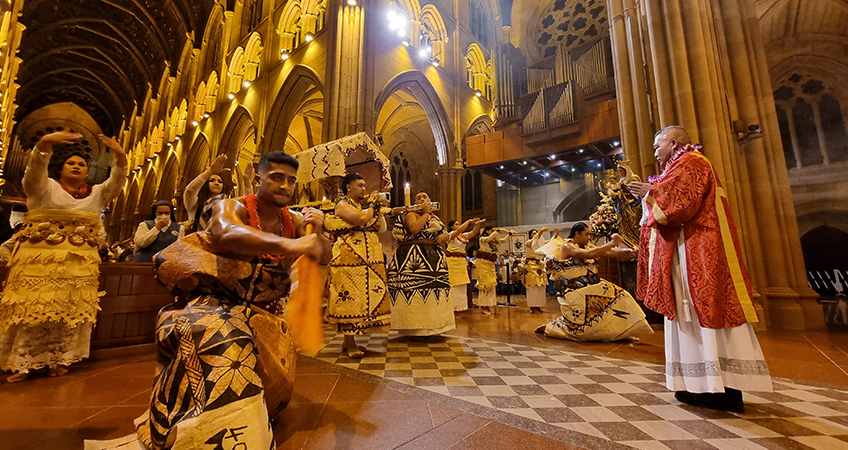 In the extreme sport of free-diving, competitors hold their breath unaided for as long as they can and drop to a depth of water as low as they can before resurfacing: some of you here tonight may have tried this as kids and given your mothers a fright! The king of this sport is Viennese-born Herbert Nitsch, who can hold his breath for nine minutes and has over thirty world records; he’s nicknamed “the Deepest Man on Earth.”[i] At the more competitive end of the sport, weights are used to help the diver sink lower into the abyss. In 2012, Nitsch set the world record at Santorini in Greece by descending to 252 metres.[ii] It nearly cost him his life: on resurfacing he suffered decompression sickness and two strokes; he was air-lifted in a coma to a hospital and the prognosis was that, if he survived, he’d be confined to a wheelchair. But he stubbornly rehabilitated himself and two years later was back plunging into deep water.

The human body, we know, is mostly made of water. So is Oceania. Fishing, agriculture, shipping and many other human activities depend on water. We build as close to it as possible. Here in Sydney people pay ridiculous prices for homes with a glimpse of water and flock to the beach at every opportunity. Studies show that being close to water increases people’s physical and mental wellbeing.[iii]

Not always. The sea can be lethal and we can do things that are lethal for the seas. Over-fishing, deep sea mining, pollution and rising sea levels and temperatures all have grave implications for Pacific nations. Despite being a water-poor continent, we’ve had more than our share lately. The Catholic Cathedral and schools in Lismore were recently flooded, along with many homes in South-East Australia. We remember how Tropical Cyclones Ofa and Val devastated Tuvalu, Wallis and Futuna, Tokelau, Samoa, Tonga and Niue in the ‘90s. Or in the last few years Cyclones Pam, Winston, Gita and Harold that hit Vanuatu, Fiji and Tonga. Water can be friend or foe.

Water is, of course, a rich symbol for Christians. In Eastertide we remember the Holy Spirit hovering over the waters at creation, breathing order and life into them (Gen 1:1-2:2) and again at the Jordan when Jesus was baptised (Lk 3:21-22), a sign of new life and order for us all. We recalls Noah’s deliverance from the flood (Gen ch 7), Israel’s escape through the Red Sea (Ex 14:15-15:1), Isaiah’s call to the spiritually thirsty to come to the water (Isa 55:1-11) and Ezekiel’s prophecy of the Lord pouring clean water over us to cleanse us and give us new hearts (Ezek 3:16-28). We might add the stories of Jesus calming the storm and walking on water (Mk 4:35-41; 6:47-52).

All these texts prefigure Baptism that marks an end to sin and a new beginning of goodness, an end to slavery and a new-found freedom in Christ, an end to fear and start of faith, an end to our old nature and a new sharing in Christ’s nature. We use holy water in Baptisms, Weddings and Funerals, and to bless homes, objects, selves. We co-mingle water with the wine of the Eucharist as a symbol of our humanity joined to Christ’s divinity. Water speaks to the Christian soul of fecundity and renewal.

No region knows the power and need of water better than ours; yet without the Christian story we could not fully appreciate its significance or our own. Our procession vividly underlined how momentous was the arrival of the Gospel on the seas.

On Christmas Eve of 1836 a young French Marist priest, Pierre Chanel, left the port of Le HavreinFrance with six other Marist missionaries and the new Bishop of Western Oceania, Jean-Baptiste Pompallier. The journey to the last major region of the world to be brought the Gospel would require Chanel to join not only the missions but also the maritime industry! Jesus chose experienced seamen as His first disciples, turning their temperaments and experience to catching men rather than fish (Mk 1:14-20). So, too, the Marists set out to catch not parrot fish, yellowfin, mahi-mahi, wahoo or crays but souls for God.

Chanel’s name-saint Simon Peter said “Silver and gold have I none, but what I have I give you” (Acts 3:6) and throughout Eastertide we read his adventures catching people with the simple bait of the story of Jesus. So, too, St Paul, the sail-maker and thrice ship-wrecked seafarer (Acts 18:3-4;:27-28:5; 2Cor 11:25), who became the most prolific people-fisher in history, tells us today that he had no elaborate lures or nets but simply “preached a crucified Christ… the power and wisdom of God” (1Cor 1:18-25). Likewise Chanel and team arrived in the Islands to preach, not a God of wealth and power, nor some demiurge known to the locals, but the one Lord of sea and sky, who had emptied Himself of His divinity and human life for our sake, like clouds pouring out their rain; and they came to preach, not to the mighty of the earth but to simple fishermen and other Islanders called by God.

When Christ recruited his people-fishers, He didn’t sugar-coat things. There were no promises of glory without sacrifice or success without suffering. He reminded them that “a servant is not greater than his master” and that there would be tribulations to face in this world (Jn 15:21; 16:33 etc.). Peter Chanel experienced many: in the Canary Islands his friend Claude Bret caught a COVID-like virus and died; in Tahiti they had to change ships; in Wallis, springboard for the mission to Tonga, they were rebuffed. Finally they reached Futuna in late 1837. Peter struggled with language, some hostile locals, the different food and the isolation.[iv] His missionary work seemed fruitless and like his name-saint he likely complained to the Lord: “Master we toiled all night and caught nothing” (Lk 5:5).

Despite so little success and so many hardships, Chanel persevered with patience and courage. Then on 2 February 1839 a terrible cyclone destroyed much on Futuna. Chanel laboured faithfully, attending the homeless, injured and dying, and winning from all the name of “the man with the kind heart”. But there was more of the cross to come. The local king Niuliki, initially friendly, feared for his authority as Christianity started to catch on. When his son sought Baptism from Chanel, the king had his henchmen ambush and brutally club the priest to death.[v] Pompallier arranged for the body to be taken, via Auckland and Sydney, back to France; but within months of his martyrdom the island of Futuna had converted wholesale to Catholic Christianity and eventually his remains were returned to the island.[vi] The Marist fathers and others continued the great mission to Oceania, and Pacific Islanders proved to be amongst the most pious and faithful Christians in the world. “Every time I think I’ve reached a limit, there is a door… it opens… and the limit is gone,” the sea adventurer Herbert Nitsch has said. So, too, Peter Chanel seemed to reach his limits only to find that God opened new doors for him. Rather than earthly wealth or wisdom, clever rhetoric or coercion, what carried the Gospel forward was always faith and love preached with clarity and compassion, living and, if needs be, dying for Christ amidst the mysterious ocean of God and humanity. If ever support were needed for Tertullian’s claim that “the blood of the martyrs is the seed for the Church,”[vii] the life of St Peter Chanel is powerful testimony. And now he hands his net over to us, to be transmitting the faith to our Pacific youth and catching new souls for Christ. St Peter Chanel, pray for us!

[iii] Blue spaces: why time spent near water is the secret of happiness | Health & wellbeing | The Guardian

INTRODUCTION TO MASS FOR THE FEAST OF ST PETER CHANEL

Welcome to St Mary’s Cathedral for our Mass for the Feast of the proto-martyr and patron of Oceania, St Peter Chanel. One hundred and eighty-five years ago, Chanel arrived on the shores of Futuna proclaiming the Gospel of Jesus Christ. The seeds of his kindness, zeal and self-sacrifice and that of his order have flowered in the vibrant Catholic communities now found in Australia, Cook Islands, Fiji, Kiribati, Marshall Islands, Micronesia, Nauru, New Caledonia, Tahiti and the rest of French Polynesia, New Zealand, Niue, Northern Mariana Islands, Palau, Papua New Guinea, Samoa, Solomon Islands, Tokelau, Tonga, Tuvalu, Vanuatu, and Wallis and Futuna. This celebration was a dream of our late chaplains Fr Penisimani and Fr Paulino and is sponsored by the chaplains and people of our several Pacific Catholic communities.

I welcome representatives of the dedicated chaplaincies of the several dioceses of greater Sydney for the Fijian, Tongan and Samoan communities, as well as members from our Wallis and Futuna, Cook Islands and any other Pacific communities present with us tonight, including any young people with Pacific heritage.

A very warm welcome to you all!