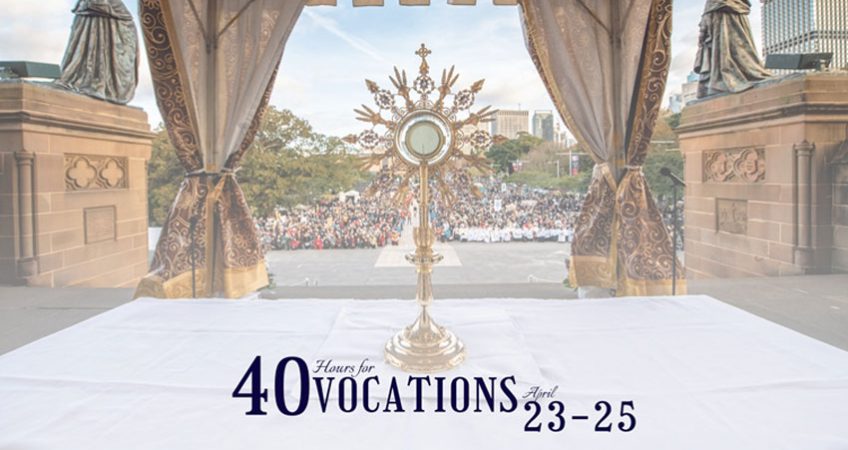 ANZACs. We probably think immediately of heroic young men rushing into battle, fighting for King and country, and dying beside their mates – all the while starring in the foundation myth of our nation. Less romantically, you might think of beach landings and trenches under fire, death and tears, blood and mud. Or perhaps of the annual dawn services and marches. But do we think of priests in this context?

Probably not… yet no fewer than 457 clergy served as chaplains with the AIF at Gallipoli and many more have served since. Other nations, too, had their padres: Fr Angelo Roncalli, the future pope-saint John XXIII, served with our Italian allies in that war as a medic and chaplain. My predecessor, Cardinal Gilroy, served at Gallipoli as a junior wireless officer on the transport, the Hessen; he was present on the first night of the campaign, when the padres absolved and blessed the young men as they were despatched in row boats for Anzac Cove; he heard the first shots soon after dawn heralding the deaths of many. Several books tell inspiring stories of Australia’s service chaplains, including Masses celebrated on the beaches, cliffs and dug-outs of Gallipoli during the months of that campaign.[1]Fr John Fahey of the 11th battalion was the first chaplain ashore at Gallipoli, as he disregarded orders to stay on ship; this shepherd would not be parted from his men. Fr Fahey went on to serve in Egypt and France as well, and to be the longest-serving chaplain on the front-line.[2]

To mention the priest-chaplains is not to lionise Catholic involvement in that war or any other; nor to diminish the contribution of other believers in the defence of our nation or the pastoral care of our men; nor to romanticize the First World War or any war since. It is only to show the solicitude that God and the Church have always had for servicemen and women who sacrifice themselves for us, enduring the horrors of war or seeking to maintain the peace. And it expresses our appreciation for the Anzac spirit, manifested at that time and ever since, a spirit foundational for Australian self-understanding.

At the time of the Gallipoli campaign, each AIF brigade had four chaplains, one of them a Catholic priest.[3] But why? They weren’t there to kill, though they were trained in defence just in case. They weren’t there to convert – the Ottoman Turks wouldn’t have been very receptive, and it would have been hard to hear a preacher over the gunfire! No, the chaplains were there as shepherds willing to go wherever their sheep roamed. Before the men went into battle, when they were on the battlefield, and when they returned – whether dead, injured, or amongst the lucky ones – the chaplains were there to offer Mass, Confession and Last Rites, Funerals, blessings and consoling words. They were icons of the Good Shepherd (Jn 10:11-18) amidst the hell of war.

It is the privilege and responsibility of the lay faithful to take Christ to the world and bring the world to Christ, especially the lost sheep of 21st century Australia. But how will such missionary disciples be nourished, inspired and directed to take on the world? That’s where the rest of the Church comes in – the one third of one percent of Catholics who are clerics, as well as those in religious orders who bridge clergy and laity.

The Good Shepherd, we know, felt pity for the crowds who were “like sheep without a shepherd” and so prepared deputy shepherds to follow after Him, and called on Christians to pray for such men to be harvesters of souls (Mt 9:36-8). He told Peter to be bedrock for His Church, to confirm the brethren, and to feed the sheep; and He told the apostles to join Peter in the ministry of binding and loosing, so that there might be “one flock under one shepherd”.[4] If Jesus walked the streets of Sydney today, He would feel the same pity He did 2000 years ago: so many have left the fold and now wander aimlessly, finding only unsatisfying pasture, falling prey to dangers of many kinds; others have never even belonged to the flock and experienced His protection and care.

I was about 15 when I first started thinking seriously about my vocation. I sensed that priesthood might be where I could make the most of my talents and life, and be most fulfilled. I took my time and did many other things before, aged nearly 25, I took the plunge and entered religious life and ‘seminary’. Christ called me to be a Christian first, an intentional, missionary disciple; then a consecrated religious, a Dominican friar; an ordained deacon then priest as well; and then a bishop, and an archbishop. With so many vocations you might say I’m vocationally greedy! But each vocation builds upon and expresses the ones previous.

Demanding as they are, religious life and priesthood are truly wonderful, life-giving vocations. They require sacrifice, of course, as anything that’s really good, really happy-making, does. They require a life-long interest in the person of Christ, the teachings of Church, the experience of people, the glories of our world – in other words, a life-long interest in the most interesting things. They require a commitment to join others in prayer, formation, action; a desire to serve others by sharing the fruits of this very full life; and a willingness to find one’s identity in Christ and that greatest of all adventures, the preaching of the Gospel. Frankly, I have loved all this and still do!

On ANZAC Day and every day we pray for the fallen, grieving or wounded, for peace and security; it’s especially through the Eucharist and Daily Prayer of the Church that we do this – and here we need priests and religious. On ANZAC Day we recommit to caring for our service personnel and veterans, especially through providing chaplaincy, counselling and the sacraments – and we need priests and religious for much of that.

By a strange quirk of the calendar, the latest day that Easter can occur in the Western Church – roughly once a century – is 25th April. That means Anzac Day always falls in the season of Easter. This year it is trumped by the Fourth Sunday of the fifty-day-long Easter feast. For all the seeming pointlessness of the young deaths at Gallipoli, the white crosses that once marked the Gallipoli hills, and the more permanent walled cross now at the beach cemetery, are portents of Easter. They promise that life ultimately triumphs over death, that courage beats small-heartedness, that love conquers all. We pray for priests and religious not just to bury us, when our turn comes, but to carry us through life’s pilgrimage from birth to death, baptism to funeral, and beyond, by leading and serving, teaching and sanctifying. Please keep praying for and encouraging such vocations. Thanks be to God for our priests and religious!

Welcome to our celebration of the fourth Sunday of Easter or ‘Good Shepherd Sunday’, so-called because the Gospel and prayers evoke the image of Christ as the Good Shepherd. This Mass brings to a conclusion 40 Hours of Adoration – with Confessions, guided reflections, communal prayers of intercession and private prayer before the Blessed Sacrament. It is our annual plea to God to send us more vocations to the Christian life, to marriage, to religious life, to the permanent diaconate, above all – given present need – to the priesthood. I welcome all those who have taken part in these devotions and thank you for your love for the Church, her priests, and all their priesthood enables.

Today, is also ANZAC Day in the civil calendar and would be in the liturgical calendar were it not trumped by the Fourth Sunday of Easter. We continue to give thanks for, and commend to Almighty God, those who have died for our country and those of all nations who died in war. We also remember with gratitude those who’ve suffered for our nation or are presently in harm’s way for the sake of our freedom. And as at every Mass, we pray for peace in our world. I welcome all parishioners on this civic and ecclesiastical feast.

Concelebrating with me are Fr Eduardo Orillo, Parish Priest of St. Joachim’s; Fr Epeli Qimaqima, Director of Vocations for the Archdiocese; Fr. Simon Kitimbo, Vice Rector of the Seminary of the Good Shepherd, who is here with a number of seminarians this morning; and Fr. Arthur Givney, First Year Director of the seminary; and Fr Peni. Conscious of the times that we have failed to live our common baptismal vocation or to be true peacemakers, we repent of our sins…