HOMILY FOR THE VIGIL MASS FOR ANZAC DAY 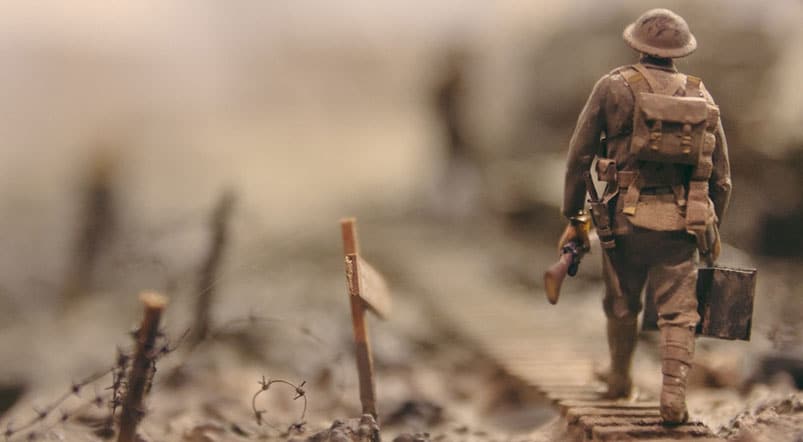 “The effects of war are widely spread and can be long term or short term. Soldiers experience war differently than civilians, although [both] suffer in times of war…” So begins the 5,000 word Wikipedia entry on ‘Effects of war’. It goes on to enumerate some economic, social and political upshots of war. Yet strangely, apart from a passing mention of ‘trauma’, there is no discussion of war’s emotional and spiritual toll. The glaring omission in this otherwise thorough page is the human dimension – what war does to hearts and souls.

Around ANZAC Day we must surely ask ourselves: What does war (and preparedness for war) do to us psychologically, emotionally, spiritually? How does it affect the way we think, feel and believe?

One strain in popular culture tends to romanticise war, reflected in films like Sergeant York (1941), Bridge Over the River Kwai (1957), The Guns of Navarone (1961), The Great Escape (1963) and Gallipoli (1981) in which war is something of an adventure. But in recent decades awareness of the brutality of war and the resultant ‘PTSD’ and even suicide among veterans has grown.[1] Defence forces offer psychological care as part of their Mental Health and Wellbeing Strategy[2] today and there’s a sustained campaign for investigating the mental health of veterans.[3] On a popular level this new awareness is reflected in films like The Deerhunter (1978), Apocalypse Now (1979), Merry Christmas, Mr Lawrence (1983), Platoon (1986), Letters from Iwo Jima (2006), War Horse (2011) and 1917 (2019).

But if awareness of the psychological effects of war upon combatants and their families is growing, what about the spiritual impacts? It’s often observed that in a crisis like war religious people can go either of two ways: their faith can carry them through or it can die on the battlefield.[4] While it’s been said that there are no atheists in foxholes, it’s also regularly asked how could a good God allow war?

This paradox was evident in the Australian response to the First World War. At the time there was serious division over the moral and religious justification for the war (if any) and especially for conscription. Churches were a significant source of inspiration, charitable aid and chaplaincy to the troops; yet the bulk of soldiers were not overtly religious and many returnees found spiritual refuge in service clubs more than churches.[5] In the years that followed there was a jump in those who self-identified as “No Religion” or wandered away from traditional religion into theosophy, séances, communism and the like. On the other hand, the two world wars and depression framed Australia’s most Christian era and a time when practising rates amongst Catholics doubled from one third to two.[6]

Beyond Australia similar contradictions in the effects of war on faith and faith upon war have been observed. A recent study in Nature: Human Behaviour concluded that the experience of war generally increases people’s religiosity, especially amongst those most affected.[7] But old and new atheists see war as one of the best arguments both for the deadness of God and the danger posed by the zeal of ‘God-botherers’. Arguably our celebrations of ANZAC Day and many war memorials around our land are at once deeply spiritual and deeply secular.

These seemingly contradictory reactions to war and religion are reflected even in our readings tonight. The choice of first reading from the Book of Wisdom (Wis 3:1-9) would seem to categorise our fallen in war as “the virtuous” whose mettle has been tested in fire, whose self-sacrifice has been accepted by God as a “holocaust”, and whose “hope was rich in immortality”. Yet the same reading recognises that for the onlookers, perhaps especially the families, what the fallen experienced seemed more like punishment and annihilation. Try as we might to romanticise war, especially when seeking to bolster the war effort or manage our grief and anxieties, the hard realities of sacrifice break through. And though sacrifice is a deeply spiritual notion, it’s often experienced as less than uplifting or redemptive.

Our Gospel tonight (Jn 12:23-8) casts some light on the paradox of war and spirituality. Jesus teaches that a worthy death is like a wheat grain that falls to the ground and is buried, but ultimately yields a rich harvest (Jn 12:23-28). There’s no avoiding the tragedy of war, the violence, death and grief, the psychological and spiritual damage all round. But there can be beauty amongst the ugliness; meaning amongst the meaninglessness. As I observed at last year’s ANZAC Eve Mass, the quintessential ANZAC for many Australians is John Simpson Kirkpatrick, the man with the donkey who devoted himself to saving others but never fired a single shot himself. The sacrifices of war can make sense precisely when they express some higher commitment to honour, loyalty, freedom, faith, hope, love and peace.

In this time of pandemic there’s been plenty of talk of “the war on COVID19”. Prime Minister Scott Morrison has said “We are in a war against this virus.” The Queen hinted at this in her rare speech on 5 April, saying of our fallen to COVID-19 “we’ll meet again”. And President Trump has called himself a “war-time president”. Such dramatic talk underlines the scale and international reach of the pandemic, the deaths it threatens, the need to co-opt people’s energies and ideals, the sacrifices it will require of us all, but especially of health professionals and the isolated, the pragmatic decisions leaders must make. Only a ‘war’ could get people to put ordinary life on hold, to forgo football and pubs and two-up, and to even have their gin distilleries turned to manufacturing hand sanitiser![8]

Of course, the analogy with war is imperfect and could even be distorting.[9] But the spiritual resources we bring to the present challenges and the spiritual effects this period of self-sacrifice may have on us may be similar. As this ‘war’ continues we will need to dig deep into our personal and national character if we are to respond with the courage of the ANZACs to whatever troubles our souls. May we demonstrate in the present crisis that we are worthy of those who carried us through our previous emergencies and who endured and perhaps transcended the psychological and spiritual trauma of their times, making of their sacrifice by God’s grace something redemptive for us all.

Because our current circumstances impede attendance at Mass and reception of Holy Communion, I invite you now to ask God to give you the graces of a spiritual communion that you would receive if you were receiving  sacramental communion. Offer this Mass and your hunger for the Eucharist for peace in our times and for the safety of your loved ones, yourselves and our world. God is not limited by our separation.

Welcome to this Vigil Mass for ANZAC Day, live-streamed from St Mary’s Basilica, Sydney. Tonight we remember gratefully and commend to Almighty God all who’ve died for our country and those of all nations who’ve died in war. We also pray for peace in our times and safety for our service personnel. But we do so in unusual circumstances: where normally we would have many representatives of the armed services, returnees and others presenting their pennants and prayers, the pandemic and ban on public gatherings have prevented this this year. Likewise tomorrow’s commemorations and celebrations will be more muted. We do have Lieutenant Commander Sophie York of the Royal Australian Navy and Mr Ray James, President of the RSL NSW, to read for us, and I welcome them. And I thank you for choosing to join us. Even in a time of pandemic we are determined that “at the going down of the sun and in the morning we will remember them.”

Every Mass is a Mass for the Dead, a Mass for Reconciliation and a Mass for Peace. But particularly in this Mass we examine our consciences and repent of any cowardice or violence in our hearts, any failure to defend truth and freedom, any neglect to make peace…