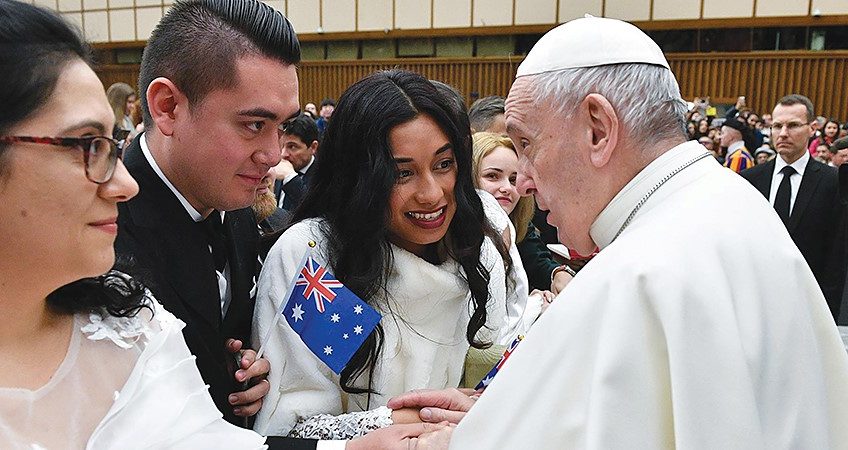 It was the most consequential wedding in history and it nearly didn’t happen. Mary’s marriage was threatened by misunderstanding and gossip, but righted by an angelic visitation and Joseph’s acceptance of her innocence (Mt 1:18-25). In the Joseph window here in St Mary’s Cathedral, Mary is dressed in the white and gold of a virgin queen, her long golden hair crowned with a floral tiara and rosary roses at her feet. St Anna looks on, dressed like a nun, while the mitred high priest holds his hand up in blessing. Mary holds her right hand out, ready to receive her wedding ring, while her other hand coyly covers her belly. In the background behind her is the Tower of David, a reference in the Litany of Loreto to her beauty and strength (cf. Song 4:4)

In the same window Joseph is dressed in royal red and gold, as it is through him that Jesus is joined to the line of David (Mt 1:6). He is bare-footed before his bride who is Ark of the Covenant. He and his groomsmen hold rods but his alone is blooming. This is a reference to the story of Aaron the priest’s staff flowering to indicate his would be the priestly line (Num ch. 17): so, from Joseph’s household will come a king who is also a priest. What’s more, in the apocryphal and medieval legend, it was by the flowering of his staff that Joseph was identified, out of all the widowers of Israel, as the one worthy to be Mary’s husband (Pseudoevangelion of James and The Golden Legend). That it flowered as a lily, told of the chastity that would mark his unique marriage. In our window he holds out the wedding ring which he is about to place on Mary’s finger.

Framing the window is the chant used for the Feast of St Joseph: “The just shall sprout like the lily and flourish forever before the Lord” (Justus germinabit sicut lilium et florebit in aeternum ante Dominum). So our beautiful window here at St Mary’s tells the story of a wedding to which a couple brought their history and hopes, their extended families and particular personalities. Before God’s priest they promised to give themselves completely to each other and to God’s plan for them, and through each other to that Boy who would be the king of kings and greatest of priests. He in turn would institute a royal priesthood of all the baptized that would include future spouses and children like Louis, Zélie and Thérèse, and all those faithful jubilarians whom we celebrate today.

Today’s readings reflect our ambivalent experience of the natural order. Our readings celebrate the rain that waters the earth, the earth that embeds the plants, the plants that provide seed for the sower and bread for the eating (Is 55:10-11; Mt13:1-23). But Jesus does not romanticize ecology. He recognizes that sometimes birds consume or hard soil resists or sun scorches or thorns choke germinating plants. Paul, too, describes creation as “groaning in one great act of giving birth”, as it awaits its fulfillment (Rom 8:18-23). Here in Australia we know both drought and plenty, and the groaning of farmers, as well as relief. But of course the Scriptures are using these as analogies for the spiritual farming of God and His Church, and that promising but often challenging ground that is the human heart.

Which brings us back to marriage and family, the complex seed-ground for so much of human life and love. Last year the renowned filmmaker Noah Baumbach released his film Marriage Story, starring Adam Driver and Scarlett Johansson. It received six Academy Award nominations and six Golden Globes. The title is deliberately ironic, as the film centres around the breakdown of a family, as a couple divorce and fight for custody of their son, visiting enormous hurt upon each other in the process. A lawyer observes that in the divorce battle one side might start reasonable and one crazy, but both will end up “somewhere between reasonable and crazy” by the end. Perhaps many a marriage is like that…

Now you might think that a strange story to recall on Marriage Sunday. But the recognition that so many marriages today fail does serve to highlight today’s couples whose marriages have survived. Why is that? In the film our couple’s relationship is originally affectionate, but increasingly becomes complacent, unappreciative, even resentful. ‘There but for the grace of God go I’, we might say – in other words, we’re not so different to many couples who didn’t make it to their jubilee, and there’s a mystery in that. ‘There but for the grace of God go we’, we should say – because in the end marriage is a super-human endeavour and it’s precisely because it is a mysterium or sacrament that it has worked for those celebrating today. Without Mary and Joseph’s Boy who was King and Priest but also sower of Gospel seeds, without that Boy full-grown witnessing to redemptive love even from the Cross, without Him sharing that grace with the ‘royal priesthood’ of His disciples, our couples could never have done it. And without the example of the saints, from Mary and Joseph through Louis and Zélie and beyond, showing what is possible, they might never have tried.

The film Marriage Story captures with sympathy and insight the breakdown of many marriages in modernity and the sad effects upon the spouses and their children. Ours is, in fact, the least successful civilisation in history when it comes to finding a spouse at all or sticking to them once we have. And here the wedding window of St Mary’s and the couple whose story it tells, the lives of St Thérèse’s family and our own, can offer an alternative possibility: that of the triumph of grace over the hard soil of human selfishness, over the scorching heat that modern culture visits upon any relationship, over the choking thorns of the modern economy, over the birds of modernity that eat up the seeds of idealism and self-sacrifice. In the trusting, beautiful and strong young Mary, in the righteous and blooming Joseph, in their union made before God and lived by God’s grace, we see that godly souls united by God’s grace, can indeed “germinate like the lily and flourish forever before the Lord”.

Because current circumstances continue to impede attendance at Mass and reception of Holy Communion, I invite those who are joining us by live-streaming to ask God that by spiritual communion you might receive the graces of sacramental communion. Offer this Mass and your hunger for the Eucharist for your spouses, children and all your loved ones, and for your safety and that of our world.

Welcome to St Mary’s Cathedral for the Solemn Mass of the 15th Sunday of Ordinary Time. It is a great joy to be able to gather today, even if we are still restricted to a quarter of our normal capacity. We look forward to the day when all who wish to do so may safely gather here and in churches elsewhere, and in the meantime welcome all those joining through live-streaming.

Today we celebrate the Archdiocese of Sydney’s annual Marriage Mass. I’m pleased to acknowledge couples renewing their vows today, particularly those married in this cathedral or those newlyweds marking 25, 50, 60 or more years of marriage! COVIDSafety requirements mean certificates will have to be sent out by archiepiscopal courier service rather than in person and have also limited family members attending. But it’s great to have those who could attend here this morning.

Five years ago, Pope Francis canonised Louis and Marie-Azélie Martin, the parents of St Thérèse of Lisieux: were it not a Sunday, today would be their feast day. Starting with Mary and Joseph, many married couples through history have been saints, and many more have had a child who was a saint. But Louis and Zélie were the first couple to be canonized together, and to have a child canonised before them, so are considered patron saints of marriage and family.

Indeed, 12 July was chosen for their feast day because it is the anniversary of their wedding in 1858. Louis and Zélie had nine children and must have expected many grandchildren. But God’s ways can be strange: four died in infancy and the remaining five entered religious life! The couple trusted in God, attended daily Mass, fasted and prayed, visited elderly and sick neighbours, and welcomed the poor into their home. They knew that a parent’s love must allow their child to follow their own path, even if, as Mary knew, this can sometimes pierce the parent’s heart.

To everyone present or live-streaming this morning, including visitors and more regulars, a very warm welcome!