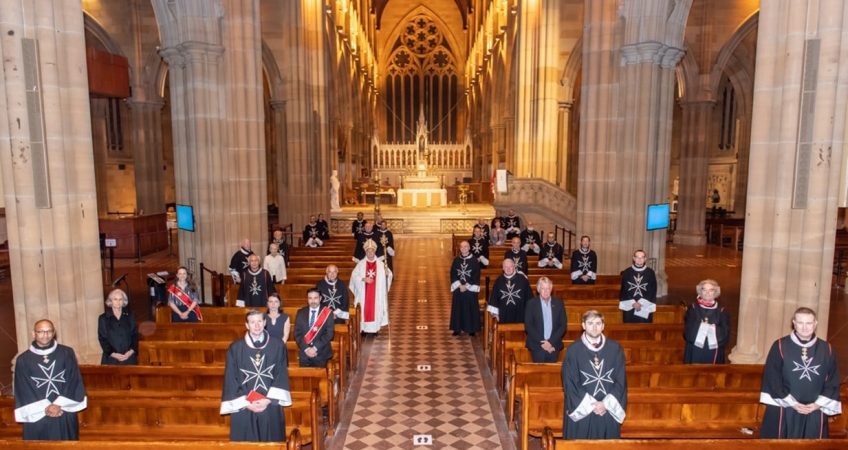 You have to admit that grown men and women dressing up in the robes, medallions and eight-pointed crosses of mediaeval knights is rather strange! I say that as someone who wears a mediaeval habit every day and has quite a collection of silly hats… So what’s it all about, apart from the fun of fancy dress?

The obvious answer is: tradition. It links us back, not just notionally but physically to nine centuries of our Order. The faith they professed and defended, we profess and defend. The service they offered the sick poor, we offer to them as our lords. The spirituality and virtue they cultivated amongst their members, we cultivate today. “What I have received, I in turn pass on to you,” as St Paul said (1Cor 11:23; 15:3). It is our tradition.

One of the great exponents of traditioning was St John Henry Newman. He observed that Catholic doctrine is drawn from the single deposit of faith that is Scripture and Tradition, but develops down the ages under the guidance of the Holy Spirit. Any genuine development would corroborate and perfect, rather than undermine or reverse, the teaching that preceded it. Doctrines develop, he thought, like a plant unpacking what is already in the seed, like a child maturing, or like life and identity passed between generations. And just as the readers of a good poem grasp aspects not appreciated even by the human author, so traditions will unpack riches previously unrecognised. Thus Church doctrine can be said to be the same today as yesterday, yet be ever-deepening and more comprehensive.[v] The Dominican theologian Yves Congar, building on Newman, characterized tradition as the soul or life-force of the Church, often disclosed in the negotiation between ancient formulas and present concerns. Indeed, tradition is for the Church what language is for a national culture.[vi] Newman and Congar’s ideas influenced the Second Vatican Council when it taught that the ‘sacred’, ‘apostolic’ or ‘living’ Tradition is the Church, perpetuating and transmitting her very substance in teaching or worship.[vii]

The great philosopher Josef Pieper pointed out that traditio is more verb than noun, a process of passing on down the line. What is transmitted is not the play-thing of the present generation; it is a trust received and fidelity to that is what gives tradition its authority. In fact, receiving is believing.[viii] But because true reception requires internalizing, pondering, interpreting, applying and transmitting that tradition, it is never merely passive.[ix] Those who are part of a tradition are not museum-keepers; their task is not conserving a relic of something long past. Real traditioning, Pieper said, occurs “through a living language; through creative rejuvenation and sloughing off the old skin like a snake, so to speak; through a continual confrontation with the immediate present and above all with the future”.[x]

Thus if members of the Order of Malta are visibly part of a nine-century long tradition, they know that it carries forward an ancient inspiration and wisdom, always evolving and expressed anew. It bears for us an important part of our individual and corporate “spirit, identity and meaning”. What we have received we in turn pass on – but first we dress in that tradition, making it our own, so we can contemplate and apply it today.

The mediaeval poet Chrétien de Troyes opens his classic of the Arthurian legend, Lancelot: Knight of the Cart, by praising the virtues of “my lady of Champagne” who commissioned the work. He declares her unsurpassed in loveliness and “worth as many queens as a gem is worth of pearls and sards” and says he would to do any service in the world for her.[i] This passionate love and committed service informed the mediaeval idyll for knights and troubadours, turning on its head the notion that soldiers seek only power and wealth. The courtly lover’s character was measured by the selflessness and endurance of his love for his ‘fair lady’.

The untidy thing about all this was that the lady-love was often unattainable and the suitor often already spoken for. The English responded by turning courtly love into the love of courtship itself, the ultimate purpose of which was, of course, marriage.[xii] But on the continent there were no such qualms! It fell to saints such as Francis of Assisi, Albert the Great and Ignatius of Loyola to redeem the courtly love tradition by transforming secular and sexualised archetypes into their respective devotions to Lady Poverty, Our Lady, and Mother Church.

These traditions of chivalry, converted into love of the poor, the holy and the ecclesial, were amongst the founding inspirations fort the mediaeval Order of Malta. The vesture takes us back to Blessed Gerard’s Hospital of St. John in Jerusalem and six more along the pilgrim way. Eventually they were recognized as a sovereign entity with its own territory, a military fraternity to defend the Church, an hospitaller society to nurse exhausted pilgrims and the sick poor, and a religious order for the sanctification of the members. Following Christ’s charge today to His disciples “to cure all kinds of disease and sickness” (Mt 9:35-10:8), Gerard was famed for courageously and generously caring for the sick whether Christian, Muslim or Jew. This love won him the admiration not just of Christian Europe but also of the caliphate.

Back in May the Holy Father reflected upon the way the COVID-19 pandemic has likewise united people of different faiths,[xiii] quoting St Francis to the effect that we are Fratelli Tutti, all sisters and brothers, all in this together. His recent encyclical of that name is devoted to friendship and fraternity.[xiv] There is much here for our Order to contemplate, pointing to the ways that its courtly love for our fair lady the Church and for our lords and ladies the sick might best be expressed today. Your work is to be one of and for fratelli tutti, the whole human family. Through you, in the words of today’s prophecy, “in the days of plague and slaughter… the Lord will dress the wounds of his people and heal all their bruises”.

Virgin of Philerme, Lady of Lourdes, Help of Christians – pray for us.

Blessed Gerard and all saints of our Order – pray for us.

Because current circumstances continue to impede attendance at Mass and reception of Holy Communion, I invite those who are joining us by live-streaming to ask God that by spiritual communion you might receive the graces of sacramental communion. Offer this Mass and your hunger for the Eucharist for the safety of our malades, our loved ones and ourselves.

[iv]   ‘Covid-19: Summary of the actions taken worldwide by the Order of Malta’ https://www.orderofmalta.int/2020/05/19/covid19-summary-actions-taken-worldwide-by-the-order-of-malta/

[xiii] Pope Francis, Homily for the Day of Prayer and Fasting, 14 May 2020, http://w2.vatican.va/content/francesco/en/cotidie/2020/ documents/papa-francesco-cotidie_20200514_giornodi-fratellanza-penitenza-preghiera.html

Welcome to today’s Lourdes Day Mass for the Australian Association of the Sovereign, Military and Hospitaller Order of St John of Jerusalem, of Rhodes, and of Malta. I acknowledge the presence of Magistral Chaplains of the Order, Monsignor Vince Redden and Very Rev. Gerry Gleeson VG.

I salute the Knights and Dames of the Order, my confreres and consouers, and all volunteers and friends of the Association. I also welcome John Spencer, representing the Venerable Order of St John, and representatives of St John’s Ambulance.

Last year we met amidst smoke and fire; this year we meet in equally apocalyptic conditions. But it is not the first time the Order has faced pandemic. The Black Death, that swept over Europe repeatedly from the 14th century onwards, came to Rhodes in 1498 when the island was ruled by the Knights of St John, and it killed a significant part of the population.[i] It attacked Malta repeatedly in the 17th century (1591, 1623, 1655, 1675, 1705), when it was under the control of the Order and as many as 2 in 5 died.[ii] In each case the Order did its best, within the confines of the best current understandings of plague, to quarantine and nurse in its hospitals; many of the knights died in the process of caring.[iii] In the present pandemic the Order has been active in 120 countries with various healthcare and social projects.[iv]

Though happily restrictions upon attendance at Mass are finally being significantly eased, some must join us today by livestreaming. To everyone present whether physically or virtually, a very warm welcome.

As we contemplate God’s gift of healing of bodies and souls, we repent of our sins and ask the Virgin of Philerme and Lady of Lourdes to intercede for us…