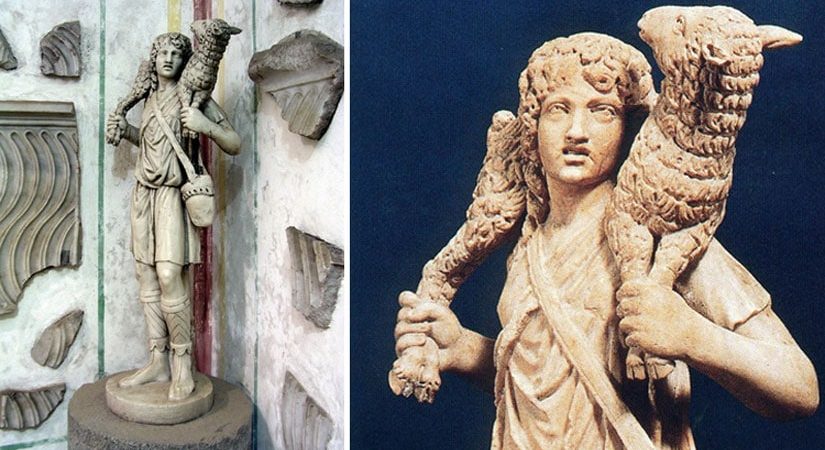 Only six days after the British Fleet arrived in 1788, La Pérouse’s French expedition laid anchor in Botany Bay. The Franciscan chaplain and naturalist, Claude-François Receveur, was dying from injuries sustained in Samoa. The chaplain of the other French vessel, the Abbé Jean-André Mongez, performed the obsequies. In subsequent years chaplains of passing French, Portuguese or Spanish ships sometimes celebrated Mass for the Catholic convicts, marines and settlers, though there was no Catholic church or altar.

Following the 1798 Irish rebellion, three priests arrived as political prisoners and there were some secret Masses. In 1803 Governor King brought this out into the open by licensing Fr James Dixon to offer Mass in Sydney, Parramatta and Windsor. But when the Irish rebelled again, Mass was driven underground and eventually the last convict priest returned to Ireland. In 1817 Fr Jeremiah O’Flynn arrived, undertook a brief ministry amongst the now-8,000 Catholic faithful, and was quickly deported.

Thus for the first 32 years of settlement, the Catholic faithful had to struggle on, mostly without priest or Mass, praying the Rosary and teaching catechism to their children. But they were hungry for spiritual leadership, preaching and sacraments, and repeatedly petitioned Church and Crown to send an official chaplain.

On this day, 200 years ago, that aspiration was at last fulfilled. Fathers John Joseph Therry and Philip Conolly arrived from Cork on the Janus.[1] From then onwards Catholic priests, Masses and churches were a regular part of Australian life. Conolly was a man ‘of no small ability and attainments, witty and full of dry humour’, ‘of exemplary religious and moral habits’. After a year’s duty here, he moved to Hobart Town where he laboured for 14 years among ‘a wicked and perverse generation’, making quarterly rounds on horseback to Launceston, George Town and other settlements.[2]

Fr Therry proved to be a ‘popular, energetic and restless’, ‘articulate and thorough’, ‘a very high-profile, rather flamboyant public figure’ and ‘a far-seeing pastor’.[3] He was always in debt and usually in contest with civic and ecclesiastic authorities. He described his 44 year-long ministry in Australia as ‘one of incessant labour very often accompanied by painful anxiety’.[4] Yet he it was obtained this ‘Hyde Park’ site and built the first St Mary’s, and many other churches and schools elsewhere. He travelled unceasingly around this country, visiting prisons, hospitals and farms, providing sacraments, counselling and teaching. He was a special friend to convicts and Aborigines, Catholic or not. He could live on the smell of an oily rag and give his last penny to the poor. This hero of the Australian Catholic priesthood is buried in our crypt and I’ll use his chalice today.

Some of you will know the fourth century statue of the Good Shepherd from the Domitilla Catacombs, now in the Vatican Museum. A clean-shaven young shepherd carries a sheep on his shoulders. It’s a deliberately ambiguous work, as were so many in the persecuted early Church. If an official came demanding an explanation, you could say: “It’s just a lovely pastoral scene.” But Christians knew what it was about. They sang “The Lord’s my shepherd”, a psalm written by David, the shepherd-boy made king (Ps 22(23)). They knew Jesus’ words in John “I am the Good Shepherd” (Jn 10:14).[5] They retold His parable of a shepherd who spares no effort to save a lost sheep “and when he finds it, joyfully lays it on his shoulders” (Lk 15:3-5). This is the Good Shepherd of the Church, carrying frightened lambs through the pack of this world’s wolves…

The way the young shepherd carries the sheep on his shoulders prefigures our images of heroic ANZACs carrying wounded mates. Carrying an injured soldier single-handedly is no easy task, any more than carrying a heavy, gangly, uncooperative lamb. But when a sheep is helpless or a soldier, it’s all you can do to move them. The Good Shepherd comes to the rescue, not just of an anxious Church but of all wounded humanity.

So when Jesus articulates the task of priest-shepherds today, there’s no romantic pastoral idyll in the background. Jesus’ sheep are often lost, injured or scattered. They must be gathered into one from disparate places. They must be protected against wolves and brigands who come “only to steal and kill and destroy”. They must be guided to safe and satisfying pasture. And they must be so befriended that they will hear and trust their Shepherd’s voice. This is the mission of pastors whether in St John’s fast-growing first century Church, or Domitilla’s third century persecuted Church, or John Joseph Therry’s nineteenth century colonial Church, or today’s and tomorrow’s Australian Church – your Church. If the Eucharistic hunger of early Australia led to an outcry for priests and priestly service, our present Eucharistic hunger during the COVID19 crisis may presage a similar outcry in the months and years to come. I pray that it is so!

After Conolly and Therry came, many priests from Ireland and England and eventually many lands, including Australia itself. With the religious they established much of our nation’s spiritual and social infrastructure. Building on that patrimony, the Catholic community now sponsors an enormous network of parishes, hospitals, aged care facilities, schools, universities, pastoral and welfare activities. What those priests started has grown into an enormous and complex expression of faith and love.

There’s no denying that some priests and bishops failed us, sometimes terribly. But on this bicentenary we remember that most by far, like Conolly and Therry, have been selflessly devoted to their people. Over these two centuries the Church in Australia has experienced natural disasters, sectarian controversies, the abuse crisis and pandemics closing churches. Each time our priests have demonstrated generosity, perseverance and pastoral creativity. Each time the Catholic people have signalled their love and need for priests after the heart of the Good Shepherd.

But why all this shepherding, this gathering and guarding and guiding? Is it just to build an ecclesiastical empire, a bigger flock than the shepherd down the road? Or to enjoy bossing the sheep around with your shepherd’s crook? Or to get rich by fleecing the sheep? No, recalls Jesus today, the task of the Good Shepherd is to be the antithesis of the self-serving exploiter or molester: that man is ‘the brigand’, the anti-shepherd, antichrist. Christ the Good Shepherd comes, and so too the good pastor comes, to give not take, and to give Himself completely. He comes for this purpose only: that the faithful might have life – the good, better, best life – in this world, but also life eternal, “life to the full”! (Jn 10:10)

Because current circumstances preclude attendance at Mass and reception of Holy Communion, I invite you now to ask God that by spiritual communion you might receive the graces of sacramental communion. Offer this Mass and your hunger for the Eucharist for our priests past, present and future, and for the safety of your loved ones, yourselves and our world. God is not limited by our separation.

Today we’ve celebrated Good Shepherd Sunday, the Bicentenary of the arrival of the first priest chaplains in Australia, and the World Day of Prayer for Vocations. Please keep praying for vocations to the priesthood and all Christian states of life. To our young people I say: ask yourselves whether your own gifts, temperament and ideals might be put to such service. Open your hearts to that possibility in prayer and sacrament, seeking God’s will for you and the courage to pursue it. Don’t be afraid to give your lives to Christ: He knows your deepest longings and potential  – and he wants you to have life to the full. Pray for the grace to know, love and serve Him best in this life, that you may draw many to be with Him in the next!

Welcome to this Solemn Mass, live-streamed from St Mary’s Basilica Sydney, in response to the pandemic and church closures. I trust that you are keeping yourself and your loved ones safe physically, emotionally and spiritually, by using our prayer and other resources on the Archdiocesan website, accessing our parish Careline and CatholicCare counselling, observing health directives and downloading the COVIDSafe App. As we take heart from declining infections, we hope to be able soon to pray privately in our churches and eventually to celebrate Mass together again.

Today is ‘Good Shepherd Sunday’. It is the 57th World Day of Prayer for Vocations, and so in this Mass we pray that young men will hear God’s call to be shepherds of His flock. We pray also for our current priests, in Sydney and beyond, that they might sanctify, teach and lead after the pattern of the Good Shepherd. And we commend to Almighty God those priests who have given their lives to the service of Christ and His people, including three from our Archdiocese who have died in as many weeks – Fathers Ray Farrell, Pat McAuliffe and Peter Morrissey. But as today is also the 200th anniversary of the arrival of Fr Philip Conolly and Fr John Joseph Therry, the first official Catholic chaplains to the colony, we gratefully remember two centuries of good shepherds in this land.

To everyone joining me this morning: a very warm welcome to you all.

[1] It was a 308 ton ship, launched in New York in 1810. It sailed from Southampton on 23rd October 1819 and from the cove of Cork on 18 December 1819, arriving at Rio de Janeiro on 7 February 1820 and at Port Jackson on 3 May 1820. The passengers were mostly women convicts and there was later an inquiry into their abuse. After delivering these prisoners Janus began a new life as a whaling ship, beginning with chasing a pod of whales that had ventured into Sydney harbour.