Homily for Mass of the 3rd Sunday of Easter (Year A) 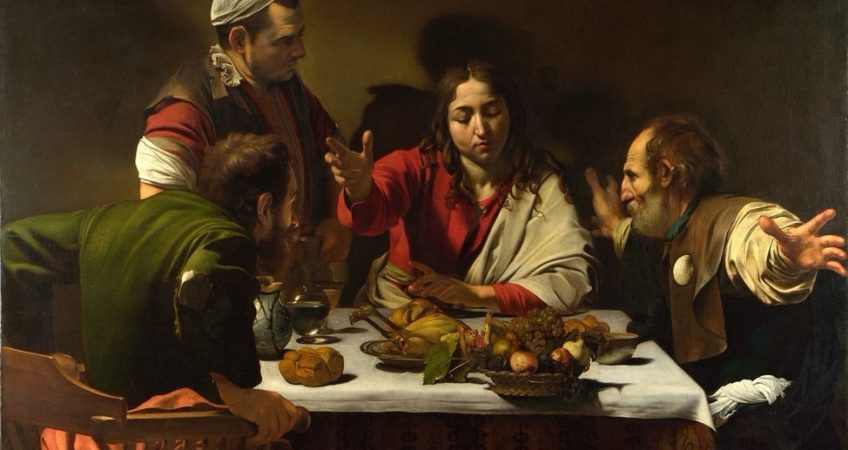 If you had to stand up today and introduce the Risen Christ to a crowd, what would you say? A man is given that daunting task this morning. (Acts 2:14-33). He is called upon to be the very first Christian preacher. He’s Simon Johnson, an uneducated fisherman from the country, of vacillating and impetuous temperament, nicknamed Peter or Rocky by Jesus. Daunting it is, but he doesn’t speak entirely unprepared: Simple Simon was chosen by Jesus Himself to lead the post-Resurrection Church and formed by Him for that task. He has the other apostles with him and the Mother of God. He’s just been graced with an extraordinary outpouring of the Holy Spirit at Pentecost. And he’s got St Luke to tidy up his homily for the record in the Acts of the Apostles. But for all that natural and supernatural help, it was quite a thing to stand and deliver the first ever Christian homily! This morning’s vignette of the κήρυγμα or fundamental proclamation of the early Church wasn’t recorded for livestreaming or streaming on demand, but we do get a clear impression of it, including of whoit was who first preached on behalf of Christ and His Church.

We also see to whomhe preached. Peter addresses a diverse group of Jews – from Judea and Persia, the Middle East and North Africa, Asia Minor and Armenia, Greece and Rome – all in Jerusalem for the harvest festival. He calls them “Men of Israel” and brothers: heirs to the promises to Abraham, Moses and the prophets. In due course he and Paul will proclaim that Gospel to Greeks and Romans, James will venture to Spain, and Thomas all the way to India. While faithful to the Gospel, each tailored his message to his audience, as we might if we were talking to socially-distanced self-isolating contemporary Australians! Since it’s pious Jews he’s talking to, who’d know their Old Testament, Peter quotes the Law, the Psalms, the Patriarchs and the Prophets. The new Israel of the Church emerges from the old and will embrace every nation as on that first Pentecost Day.

So, it’s clear that the Christian message is for everyone but must be directed to particular someones. If it is to attract and persuade, we’d better know who we’re talking to and their background understandings. As Jesus met Peter when he was by the lakeside, and talked to him first about fishing (Mt 4:19; Lk 5:1-11; cf. Jn 21:1-14), so too must Christians approach others not as potential notches for our conversion belts, but as living, breathing images of God each with particular hopes and dreams, needs and challenges.

Enough about the who and to whom, but what to say? Here again, Peter is our guide: he starts with his deep sense of divine providence. Jesus the Nazarene was “commended to us by signs and wonders from God”. He was put into the hands of sinful men “by the deliberate intention and foreknowledge of God”. And He was “raised to new life” by that same God. For Peter, Jesus is the fulfilment of the promises to Israel and the hopes of every human heart: we were waiting for a Saviour-King; we were craving life after death; what we half hoped for was confirmed in Christ’s Resurrection. Christians are, above all, witnesses to Christ’s life, death, rising and ascension, and to the saving power of those events: as Peter says, “all of us are witnesses to these things”.

All of us Christians are witnesses to these things. Christianity is not principally an NGO, though it does various good works not-for-profit. Nor is it primarily an institution, though it has its administrators, laws, strategies, buildings and so on. Nor, chiefly, is it a cult, either in the sense of an exclusive group of true believers or in the sense of those who worship in a particular way. No, we worship in the ways we do, with the people we do, because we are given them by Christ. We share in the sanctifying, teaching and shepherding work of Christ and His Church. We serve humanity in all these ways because we are witnesses to Christ and because these things are an essential part of our witness.

So we have something of the who, to whom and what of Christian preaching. Today Peter also demonstrates the how. Patristic authors divided history into three epochs: the age of the Father, from the creation, fall and covenants, to the Law, prophets and wisdom of Israel; the age of the Son, spanning the Incarnation, Passion, Resurrection and Ascension of the Lord; and, finally, the age of the Spirit, which begins at Pentecost, handed on in the apostolic tradition, testified to by signs and wonders in every age, and embraced and enacted by works of Christian charity.

25 years ago I was given a cross. I was a young academic at the Australian Catholic University when a Mercy sister and Scripture scholar, Sr Barbara Stead RSM, was appointed as my mentor. She taught me many things but ultimately I accompanied her as she died of cancer. After her death, the sisters gave me a very solid, German, bronze cross, which I hung on my habit Rosary and which sounds like a bell as I walk along. It is, I sometimes joke, an early warning system for people that the archbishop is coming! Sculpted on the face of that cross is not an image of the crucified Christ as we normally have, but an image of today’s Gospel story, the Supper at Emmaus (Lk 24:13-35). Christ, having broken open the Word for the disciples on the road, stops with them long enough to sup with them also. But when He does it is a reprise of the Last Supper. At this first Eucharist after the Resurrection the two “recognised Him in the Breaking of the Bread”.

At our Baptism and Confirmation certainly, and perhaps at other times in our lives also, we receive spiritual gifts so we can give witness to Christ in this age of the Spirit. But the place that we are regularly ‘recharged’ with that power is, of course, at our Emmaus, the Mass, when the Word of God and the Bread of Life are both broken for us by Christ. We are, dare I say, like my iPhone, in need of regular recharging if our communications and other Apps are to work!

During this pandemic when churches are closed and public gatherings prohibited, I know many are missing terribly the reception of the Eucharist. Next week we’ll celebrate 200 years since the arrival of the first official priests in the colony, securing at last the celebration of the Mass in this land and I will have more to say about that then. But like those first Catholics so hungry for the Blessed Sacrament, we can in the meantime hear and share the basic Christian proclamation, with our children, friends, colleagues. We can give witness “to all these things” in this Great South Land of the Holy Spirit by worthy lives. And we can prepare to recognise and receive Him again “in the breaking of the Bread”.

Because our current circumstances preclude attendance at Mass and reception of Holy Communion, I invite you now to ask God that by spiritual communion you might receive the graces of sacramental communion. Offer this Mass and your hunger for the Eucharist for your loved ones, yourselves and our world. God is not limited by our separation.

INTRODUCTION TO MASS OF THE 3RD SUNDAY OF EASTER (YEAR A)

Welcome to our Solemn Mass for the 3rd Sunday of Easter live-streamed from St Mary’s Basilica, Sydney, in response to the COVID19 pandemic and church closures. Your priests, even if they cannot celebrate Mass with you, are continuing to celebrate Mass for you, each and every day. Your fellow parishioners are also praying for the dead, sick and at risk, the isolated and anxious, health professionals and essential service workers, pastors and civic authorities. As we look forward to the possible easing of restrictions in coming weeks and a phased return of our young ones to school, we pray that we will soon be able safely to celebrate Mass together again, and we pray for our students, teachers and families.

That we might rise with Christ from the tombs of our sins to new life, let us repent of our sins.