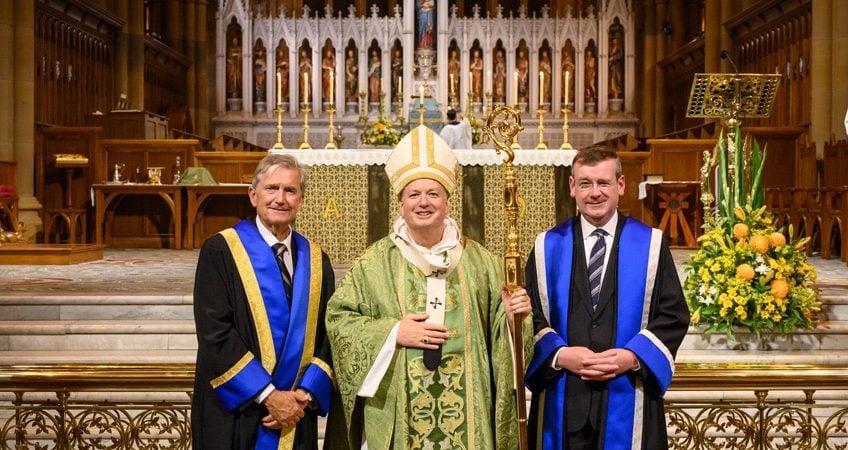 New beginnings. The first Christians experienced the encounter with Christ as so inside-outing that they compared it with being born again (2Cor 5:17; Tit 3:5 1Pet 1:3,22-3; 2Pet 1:4; cf. Jn 3:1-8). Christian institutions need such rebirth and renewal periodically, too, lest they fade and die. The Epistle of St. James from which we read today famously insists on a living faith, a faith lived in deeds (Jas 2:14-26) . For James a purely private faith, never taken for a public outing in deeds, is “useless” – useless to the believer because it’s of doubtful authenticity, and useless to the onlookers unpersuaded by pure theory. Faith and deeds must work hand-in-glove, James insists, if we are to be people of integrity and agents of conversion. No wonder Martin Luther, with his insistence on the purity of “justification by faith alone” dubbed James’ “the epistle of straw” and wanted it excised altogether from the New Testament!

But James’ argument is more complex than first appears. It is not just a matter of consistent performative utterance. No, he takes a decidedly metaphysical turn, saying that faith without works is like a soul separated from the body – quite dead. Just as the soul is invisible and ineffectual without the body, so is faith without works; indeed, without deeds to embody it, faith can be a mere phantom. Loud professions of faith never concretized in worship, or grand pledges of ideals never demonstrated in service, are increasingly vacuous. But the converse is true also. Endless charity work or social justice activity, without sound principles informing it, will degenerate into activism – haphazard, sterile, exhausted. So, for James, faith and deeds need each other, as surely as the body needs a soul and the soul a body.

Now, something similarly hylomorphic might be said about a university and its Vice Chancellor. A university without a VC as the head mediating and serving the soul might survive for a time in a somewhat vegetative state; but without this unifying and guiding principle, its identity will fade, its purposes be confused, its members disintegrate. So we are very pleased to have a Vice Chancellor to lead us forward anew.

Professor Francis Campbell comes highly recommended by people I trust in the ecclesiastical and academic scenes in Britain. They also said they would curse me if we Australians poached him! So I think it is no accident that his advent in these parts was augured by fire and smoke, drought and storms: this is clearly the result of British curses. Nonetheless, we are excited to welcome this student of Queens, Leuven and Penn, this fellow of St Edmund’s Cambridge, this distinguished Vice Chancellor of St Mary’s Twickenham. His experience of academic life and leadership will be invaluable as he assumes his new task.

But given that he will be dealing with administrators, staff and students on the Fremantle, Broome and Broadway-Darlinghurst (Sydney) campuses, with three clinical schools in greater Sydney, one in Werribee (Melbourne) and several more in rural Australia, with multiple Catholic education offices, healthcare providers and other clients, and with other tertiary institutions (Catholic or secular) as rivals and collaborators, his diplomatic experience may prove at least as valuable. Francis has worked with the European Commission, the United Nations and the British Embassy to Rome, and as Deputy High Commissioner to Pakistan and Ambassador to the Holy See. He has also been policy advisor and then Private Secretary to a Prime Minister: this government experience will hold him in good stead when dealing with commonwealth and state education ministers and their departmental officials – as well as bishops with all their complexities.

Here in Sydney, where the campus grew so rapidly and achieved so much in a decade, I am confident that that early momentum can be recovered, as there are many unrealised opportunities for growth for the University and for greater service to young people, the Church and community. We are delighted to hear that the new Vice Chancellor will have bases in the West and the East and divide his time more evenly between them. And I know he will have much to contribute, not just to the university but to the wider Church and community.

New beginnings, then, for the University and for Professor Campbell, as he to some extent informs its life and it to some extent embodies his. But, of course, universities need more than charismatic personalities at the helm. Without what the Old Testament mostly calls ‘wisdom’ and the New Testament mostly calls ‘faith’, universities risk becoming information dispensaries or, worse, research point factories or, worst of all, degree mills, without no deeper sense of what it’s all for. As the 19th century Danish philosopher, Søren Kierkegaard, put it: “A human being can resort to wherever he thinks there is some truth to be had, for the sole purpose of learning to expound it, so that his music box may add this piece to his repertoire, but as for doing anything about it, the thing never even occurs to him.”[1] True learning, he insisted, must be informed by a deeper purposefulness and enacted in meaningful deeds.

Emblazoned across the biblical page on the Notre Dame crest are the words In principio erat Verbum – In the beginning was the Word. In harking back to the beginning of creation, the time before time, and to the beginning of redemption, the time beyond time, the University embraces a present illuminated by that same creative and redemptive Word. That Word is no pure spirit bereft of body, no faith-thought devoid of works: no, in the beginning of the new creation the Word became flesh, a baby born of a Virgin, who embraced the human experiences of learning and then teaching, and who put into action all that Word and Wisdom represented. That living Word of God is the foundation of all that this University does, the guiding principle that brings together divergent disciplines, not for knowledge-grabbing or degree-marketing, but for true learning, with purpose and application.

One of this University’s most important documents, in my view, is its statement about The Catholic Intellectual Tradition of Liberal Education.[2] Here the University claims for itself the ancient Catholic tradition that “contains a vast and rich treasury of ideas, reflections, thoughts and practices”, that inspires many higher ed providers around the world, that underpins much social action, and that informs the lives of millions. It “begins with the thought that faith is fully compatible with reason,”so there can be no genuine conflict between true faith and sound science. It acknowledges:

Now that is an Idea of a University worthy of informing its activity! But it is no easy task. There will be times when Professor Campbell feels he’s living the Lord’s challenge in our Gospel (Mk 8:34-9:1) about standing by Christ before this sinful generation and being ready to take up our cross. At such times he must take comfort in the promise that those who lose their life for the sake of Jesus and His Gospel will save it! Indeed, it is my hope that our new Vice-Chancellor, part Irish, part British, part international man, will find in Australia a new life and home – or homes, West and East – and discover great joy informing the University’s mission and life.

As we contemplate this new beginning, we give thanks for those who have contributed so much to the growth and spirit of this seat of learning for three decades and more, and we draw on their inspiration for the future. May God bless you, Vice Chancellor! God bless the University of Notre Dame Australia and all who sail in her!

Welcome all to St Mary’s Basilica for the celebration of our Mass to Inaugurate Professor Francis Campbell as Vice-Chancellor of the University of Notre Dame Australia.

I acknowledge concelebrating with me the Bishop of Wollongong, Most Rev. Brian Mascord, the Auxiliary Bishop of Sydney and Archbishop’s Liaison for Tertiary Education, Most Rev. Richard Umbers; Auxiliary Bishop Most Rev. Terry Brady; and my brother priests, including our national Catholic university treasure, Fr John Neill OP.

I recognise Her Excellency, the Governor of New South Wales, Hon. Margaret Beasley AC, QC and Mr Dennis Wilson. Having previously served on several benches and tribunals, most recently as President of the New South Wales Court of Appeal, Justice Beasley was also a Lecturer in Notre Dame’s School of Law and a member of the School of Law Advisory Board. We are also delighted to welcome her predecessor as Governor, Dame Marie Bashir AD, CVO, another friend of our university; the Consuls-General of Croatia, Malaysia, Portugal, Spain and the United States; and Hon. David Scarf, former Ambassador of the Order of Malta to Timor-L’Este.

Also from the tertiary sector: representatives of the Australian Catholic University, the Catholic Institute of Sydney and Campion College; the CEO of TEQSA, Mr Anthony McClaran; and other academic leaders and staff;

Other distinguished guests and friends of the University;

Above all, I welcome our incoming Vice-Chancellor, Prof. Francis Campbell: a very warm welcome to you all!