HOMILY FOR MASS FOR THE SOLEMNITY OF ST. JOSEPH SPOUSE OF MARY 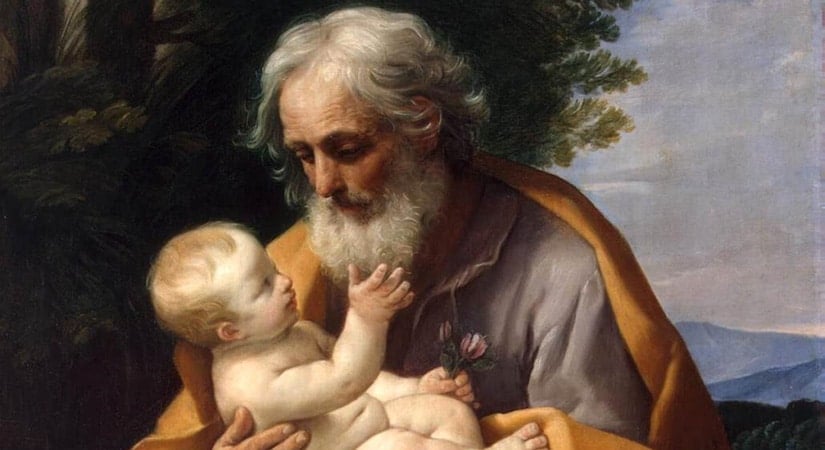 Our Lady of the Rosary church, Fairfield

We all know the stories of St Joseph: the long telling of his family tree; the Betrothal to the Blessed Virgin; the Annunciation by an angel in a dream; the journey to Bethlehem; the Nativity of the Lord; the Presentation in the Temple; the Flight into Egypt; the return to Nazareth; and the Finding in the Temple. But for all those vignettes we actually know very little about him. He’s mentioned by only two of the four evangelists and in none of the rest of the New Testament. He’s never described, never speaks, and more or less disappears from the picture after Jesus’ childhood – even though people still refer to the grown man as ‘Joseph’s boy’.

Well, not everyone can be a star, and when your family includes God-made-man and woman-made-Mother-of-God, it’s little wonder the world’s attention is elsewhere. Yet Joseph’s hiddenness may actually be the key to understanding him. Like John the Baptist and his parents, and like Simeon and Anna in the Temple, Joseph is in many ways an Old Testament figure, on the cusp between the two covenants, Old and New. He’s a faithful Jew who symbolises the hopes and dreams of Israel and who glimpsed the coming of the Messiah.

But unlike the others, Joseph stands off-stage; he effaces himself completely. John the Baptist talked big about humility, that he wasn’t the Light, that he was unworthy to untie his sandals, that he must decrease so Jesus might increase. All the same, John was pretty good at drawing attention to himself, dressing like a hippy and eating like a stray vegan, calling all Israel to repentance and baptism at the Jordan, getting the chance to baptise God the Son Himself while the Father and the Spirit looked on, training some of Jesus’ disciples, fascinating and alarming the authorities, and finishing with his own head being the star attraction at a Princess’ birthday party. For all the humility talk John couldn’t point the spotlight elsewhere. But Joseph put himself so completely at the service of his bride and son that he vanished. It was enough to live for them. As St. Paul VI once put it: “St Joseph is a model of those humble ones that Christianity raises up to great destinies”; the proof that ordinary people are by God’s grace capable of extraordinary things.

Joseph’s family, despite its uniqueness, has powerfully informed the Church’s image and our civilisation’s view of the family. Of course family is a natural and universal institution; ancient Jews and Romans, more ancient Australian Aborigines, and every society before and since have reverenced this intergenerational community of life and love, built on marriage, where children are welcomed, loved and nurtured within the home of a couple whose life-long dedication to their children is helped by the glue of their life-long commitment as spouses, and whereby this ‘nuclear’ family is located within a wider kinship system of ancestors, collaterals and descendants. Family has been the basic unit of every society until this one, the principle producer and nurturer of the next generation, fundamental to polity, economy, and culture. Even George Bernard Shaw, who was openly opposed to traditional religion, recognised that perhaps “the greatest service that can be rendered by anyone to their country and to mankind is to bring up a family”.

It was to this project that St Joseph was committed, even before he knew that his family would be unique in human history, in salvation history. Later he was to realise that he and his wife would mysteriously represent not only the married vocation but the celibate vocation also, in a special marriage and a new faith that would venerate both.

All too often people idealise marriage and family, pretending all is hunky-dory when it’s not and can’t be. But this is not the lesson of Joseph. His was a life of multiple humiliations: discovering his betrothed was pregnant and all the village gossiping, being forced to leave the district for a census, being unable to find a room for his wife’s confinement, being forced to flee thereafter. His was a life of confusion: wondering what on earth the pregnancy of this virtuous woman could mean, then the vision, the strange declarations of angels, shepherds, kings and Temple prophets, and the uncertainties of how he would hold things together. His was a life of danger: the peril of crossing paths with Roman soldiers, oriental wise-men and a power-crazed king, so determined to kill the boy he had the streets run with baby blood; the dangers of fleeing as a refugee to a strange land and returning years later; the anxiety for his 12-year-old who’d disappeared when they were on pilgrimage, causing what Mary described as Joseph’s agony. Being husband and father in this family was no story-book romance!

If even God’s family knew such difficulties, we should not pretend them away in ordinary human families. If the very first Christian family suffered such challenges, we need not imagine that familying is easy, even for saints.

That should not daunt us. Life isn’t always easy, we all know that; to pretend otherwise would be at best naïve, at worst disastrously out of touch with reality. But nor are the pot-holes of life uncrossable. The story of St. Joseph is a story of second chances and new beginnings: Mary and her man start again when Joseph realises her innocence and the child’s life are from God; isolated in a stable for the birth, they are suddenly surrounded by admirers and well-wishers from angels to shepherds to kings; fleeing from one land they find a new one, moving from one home to find another. Any of these things could have been the last straw for him, but Joseph was a man of great faith, and so, like Abraham in our second reading, “even when it seemed his hope could not be fulfilled, still he hoped and he believed” (Rom 4:13-22). Faith kept him going, all the way to heaven.

So today we look to St. Joseph’s example. From him we learn humility and trust and perseverance. We learn that no mission is so big, no danger so grave, that they cannot be embraced as long as we have the support of God, the protection of family members and the companionship of friends and co-religionists. In an age when many struggle to keep going, we turn to St. Joseph as our model and guide.

INTRODUCTION TO MASS FOR THE SOLEMNITY OF ST. JOSEPH SPOUSE OF MARY

Our Lady of the Rosary church, Fairfield

Welcome to this celebration of the Eucharist as I begin my canonical visitation of the Parish of Our Lady of the Rosary, Fairfield. I’m looking forward to my several Masses and visiting various sites around the parish, meeting with your parish clergy and lay leaders, as well as individual parishioners, along with people from the three schools, young adults, the elderly and infirm. I thank Fr Michael and all the parishioners in advance.

Today’s was to have been a celebration with all the leaders, staff and students of our parish school. Sadly, we have been overtaken by the COVID-19 virus which will severely restrict our worship and so many other aspects of life in the weeks ahead. The Holy Father has called on the Church at this time of pandemic to pray and fast: for the victims and their families, for health workers and those seeking a cure, and for those most at risk. As the government ramps up precautionary measures, the Church is determined to play its part, including helping keep people healthy and bringing the sick healthcare and pastoral care.

Today is of course the Solemnity of St. Joseph, Spouse of the Blessed Virgin Mary, and so today we might remember especially all fathers and families!