HOMILY FOR MASS FOR THE MEMORIA OF ST. BONAVENTURE + RITE OF CANDIDACY 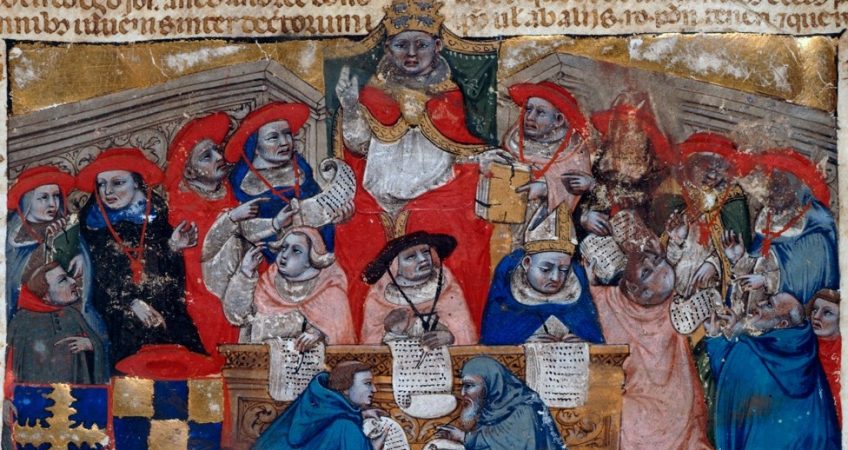 The Second Ecumenical Council of Lyons of 1274 was one of the largest the Church ever held. Presided over by Pope Gregory X, it was attended by five hundred bishops, observed by kings and ambassadors, and advised by another thousand prelates and periti. On the agenda were the conquest of the Holy Land and the reunion of the Eastern and Western churches, and so it welcomed representatives of the Patriarch of Constantinople, of the Byzantine Emperor and even of the Khan of the Tartars. With doctrinal questions and church reform in the air, the Pope wanted the best theologians there; with the continued existence of the friars’ movement also in question, the friars wanted their sharpest minds and tongues. So the Dominican Thomas of Aquino and the Franciscan Bonaventure of Bagnoregio were summoned. But Thomas died on the way and it is said that Bonaventure wept when the news reached the Council.

There are lots of stories of the two of them together. They had been mates from student days, when both were sent to the still-new university of Paris with its ferment of new thinking. Outstanding scholars in an age of scholars, they studied, graduated and even taught alongside each other for a time, demonstrating the partnership of faith and reason and setting the bar high for theology ever since. Both served the Church with diligence and passion and were favourite theologians for popes and councils ever since. Both were members of the new mendicant orders renewing the Church in that age and defended the friars movement against those who wanted everything to conform to diocesan or monastic models. According to one tale, when Boney went to visit Tommy in his cell, he found an angel dictating his next theological tract and the Franciscan coyly retreated from the room; but in another it was Tom who broke in on Bonaventure’s peace when the saint was writing his Life of St Francis and, finding him in an ecstasy, withdrew declaring “Let’s leave a saint to work on a saint.”

Though their friendship built on so much in common, they had their differences also. In theology, the Franciscan gave sentiment and mysticism a greater role than did the Dominican, and philosophical and theological adventure a lesser role than traditional piety. ‘Heart knowledge’ trumped ‘head knowledge’, left brain over right. So where Thomas described heaven as beatific vision or knowledge of God and the saints, Bonaventure thought of it beatific union or love. He famously counselled his hearers to ask for grace rather than learning, to prefer prayer to reading, and to think of God as Spouse more than Teacher. When Aquinas asked which authors Bonaventure followed, he pointed to crucifix and answered: “That’s the source of all I know: I study Jesus Christ and Him crucified.”

Yet, for all the efforts of hagiographers to make him into a simpleton Friar Tuck, the fact is that Bonaventure was one of the most brilliant men of his day, became Minister-General of the Franciscans and a Cardinal, and is celebrated as a Doctor of the Church. He impressed all in the emerging universities and insisted – against the instincts of St Francis – that priests must have the books and education necessary to contend with the issues of the day… He would be as pleased by the library here at RMS as by this chapel! Indeed, where the supposedly more rationalistic Aquinas thought some things like the creation of the world and the three-personal God were beyond the human mind to discover for itself, Bonaventure thought he could prove these things by natural reason alone!

Given that Our Lord says clearly in our Gospel tonight that the highest things are “hidden from the learned and the clever” and only revealed to “mere children” (Mt 11:25-27), how is it that Bonaventure became a saint? Indeed, the entire Western intellectual enterprise, with its love for dialectic or intellectual football matches, seems to have ignored the Lord on this. Identify two sides of some matter, pick your side, prove why yours is right and the other wrong – with multiple clever reasons if you’re a medieval, or with expletives and spin if you’re a post-modern. Wouldn’t we do better to adopt the simple faith of children and old ladies, and forget all the classes and assessments at UNDA and CIS?

Hold on: when Our Lord praises children as the recipients of revelation, He is not praising them for learning nothing at all – quite the opposite. It was as a child that Thomas Aquinas started asking theological questions and as a child that a near-death experience set Bonaventure on course for the Franciscans. You don’t have to be a child, let alone a dummy, to be a mystic! But you do need the open-minded and hearted wonder of a child. And so when Bonaventure and Aquinas engaged in scholastic disputes, with videtur, sed contra and respondeo, they were always courteous and generous to the range of views, they willingly said sic et non, “both-and” rather than “either-or”, where the truth was not all on one side, and they followed the adage “seldom affirm, never deny, always distinguish”.

Bonaventure, like Aquinas, demonstrated that priestly life need not and should not be a matter of choosing sides between faith and reason, structure or freedom, hierarchy or people, God or creation, thinking or feeling, magisterium or conscience, propositions or experience, Christ or the Holy Spirit, progress or tradition, pre-Lyons II and post-Lyons II. We might lean more to one dimension or another at particular times or commonly. But we must be wary of polarisation, lest like the Assyrians in our first reading, we attribute all knowledge and wisdom to ourselves (Is 10:5-16). Ours must be a childlike openness to the whole of reality, to every human person, to the beautiful if challenging worlds to which they belong, and to the God who is author and sustainer.

Though Bonaventure was not as round a priest as Thomas, he was a more all-round priest, engaging not just in the preaching-teaching side of priesthood but also in sanctifying and governing. Head of the Franciscans from age 35, he contended with internal division and external opposition. Like Francis before him, he devoted himself to rebuilding God’s broken Church. While academic absent-mindedness protected Aquinas from higher office, Bonaventure only narrowly escaped appointment as Archbishop of York, and then found himself pursued by two papal legates with a mandate creating him cardinal bishop and requiring him under religious obedience to accept. According to legend Bonaventure was doing the washing up when the nuncios finally caught up with him, and he told them to hang up the cardinal’s galero and pitch in with him. It’s a very Franciscan story: Aquinas, like most of the Dominicans, wouldn’t have known where the sink was! But it is a story of the humility of a priest who, following our Gospel passage, had made himself as a child.

Aquinas’ inconvenient death on the way to the Second Council of Lyons left Bonaventure to argue for church unity (which was briefly restored), the relevance of the friars (which was from now on respected) and the ongoing reform of the Church (a perennial need). He then promptly died himself, possibly from poisoning. The Pope presided at the funeral, with all the bishops, and a future pope preached. At that Council he had successfully resisted simplistic dichotomies between East or West, hierarch and prophet, theological free-spirit and respecter of tradition, officeholder or charismatic, creative pastor or staid churchman. His priesthood united these many elements.

Tonight Nonie, Luis and Wellington declare their willingness to serve Christ as His priest, picking Him and Him only as their side and standing always by Him, but always with reverence for the whole, for all sides, all reality; always in charity, with a view to ultimate unity, to building up the holy People of God in holiness and truth.

Tonight, these men resolve to complete their preparation ‘to give faithful service to Christ the Lord and His body, the Church’. We ask for nothing less than the total gift of themselves in the ‘both-and’ way of Bonaventure. Following in the footsteps of the Master, who came to ‘serve and not be served’ (Mt 20:28), theirs will be a ministry of servant leadership, with the galero left hanging on a tree. They must be converted and reconciled, again and again.

Dear brothers in Christ, such conversion and service to others comes at a cost. Christianity is full of wonderful paradoxes that bring together life and death, death and rebirth, weakness and strength, service and authority, humility and exaltation, giving and receiving back. You now will bridge such things.

Thank-you for the generosity of the gift of yourselves tonight to Christ the Priest and to His Church. Be ready to keep walking the Way with Christ to Jerusalem, to the Cross and Resurrection, whether it’s from Colombia, the Philippines or Brazil, via Sydney, to who knows where before heaven. Give yourselves now completely to Him and know that you will receive back your lives graced abundantly. And to those of you further advanced towards priesthood and those already ordained, thank you brothers for your lives of service. May God who began this great work in you all bring it to fulfilment.

INTRODUCTION TO MASS FOR THE MEMORIA OF ST. BONAVENTURE + RITE OF CANDIDACY

Welcome to tonight’s happy celebration of the Eucharist on the Feast of St Bonaventure, at which three of our brothers in Christ will be admitted to candidacy for the priesthood: Nonie Tiburan, (Luis) Alejandro Giraldo Alvarez, and Wellington De Oliveira Prando.

On an occasion such as this, I cannot but help recall when I entered the Dominicans 35 years ago and when I made my solemn vows, nearly 30 years ago, which was in important ways equivalent to candidacy. So began an exciting, if sometimes challenging journey in a ministry I have loved sharing with my Lord and Saviour. Tonight is an opportunity to reflect upon the great joy of such a calling but also its great responsibilities and sacrifices.

I acknowledge the pivotal role played by the Neocatechumenal Way in assisting these men in their vocational discernment and formation. I salute the National Team of Catechists; the Rector, Dean of Studies and Spiritual Director of Redemptoris Mater, with staff, volunteers and fellow seminarians; and the local catechists and mission families with whom our three candidates walk.

I thank you all for your ongoing dedication to the building up of the Body of Christ through your works of proclamation and formation. Welcome one and all.