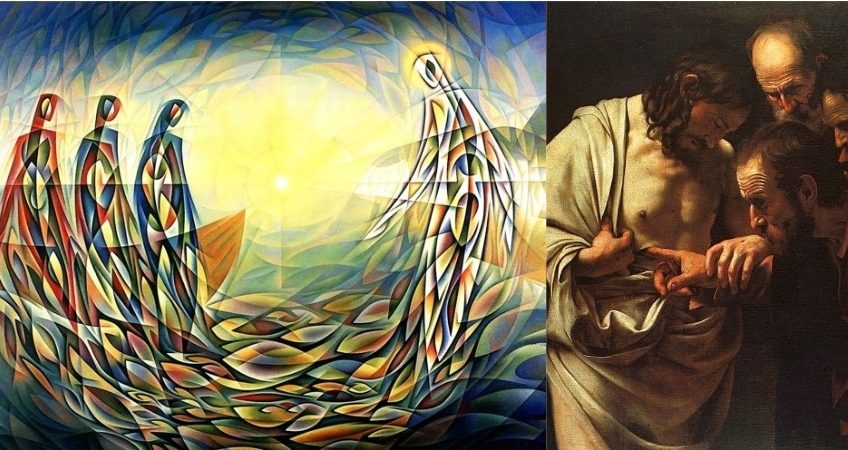 There are two endings to John’s Gospel. This Sunday we’ll hear the first, the Jerusalem ending (Jn 20:19-31), in which the apostles (minus Thomas the Twin) are huddled in the Upper Room on the day of the Lord’s Resurrection “for fear of the Jews” when Jesus appears to them; and still there when Jesus returns on Low Sunday to reassure them and Thomas too. Their instinctive response to the crisis of the Lord’s trial and execution, of losing their Master and friend, of the consequent danger, disarray and division, and to the mysteries of the empty tomb and rumoured appearances, was to roll up into a ball and engage in some ‘social distancing’ and ‘self-isolation’. Jesus breaks through the walls of the Cenacle and of their minds with His appearance, His greeting of peace, and His intimacy in showing His wounded but glorified hands and side. Having restored their sense of security, He reprises their mission: to be the Spirit-filled people and minister divine mercy to others (cf. Mt 16:19; Jn 14:26; Acts 1:8).

Today’s reading is part of the alternative ending to John’s Gospel, the Galilee ending (Jn 21:1-14). According to this version the apostles are so disoriented and demoralised they flee the capital and go back to their old profession of fishing. Their response to the crisis of Holy Week is to return to the things of old, to go on a nostalgia trip, to seek security in the familiar places they felt safe in their youth. They sound like children, with Peter saying ‘I’m going fishing’ and the lads responding ‘We’ll go too’. Indeed, instead of addressing them as disciples or friends as He was wont to do, Jesus calls them ‘Children’ and, knowing what kids like to eat, He offers them fish burgers for breakfast! Of course, the call to be as innocent as children, to be children of light, children of God, had been antiphonal through His formation of them (Mt 5:9,45; 13:38; 18:3; 19:14; 23:37; Jn 1:12; 11:52; 12:36; 13:33). But, again, what Jesus is really up to here is re-presenting His earlier call to them—in this case to be “fishers of men” (cf. Mt 4:19). He reminds them once again that His divine power will carry them through, by pointing them to the right place to cast their nets and by enabling a miraculous haul of so many fish they’re unable to haul them in on their own. 153 large fish to be precise—more than enough even for a breakfast at one of the Missionaries of charity feeding stations!

But why 153 fish, precisely? Like many mysteries in the Scriptures, there have been many interpretations. It’s been noted that the Sacred tetragrammaton – the Name of God – appears 153 times in the Book of Genesis, so perhaps it suggests a godly number of disciples.

St Jerome claimed the Greeks had identified exactly 153 species of fish in the sea and so the disciples were being directed to haul in at least one from every kind of human being: focusing just on Jewfish will no longer be enough! Nowadays marine biologists distinguish at least 33,000 species of fish, so our mission just keeps getting bigger!

St Louis de Montford thought it was a foreshadowing of the number of Aves in the Rosary, 10 for each of the 15 mysteries and 3 for the intentions of the Pope. Now we have the mysteries of light as well, we’d have to revise the number of fish to 203! Our prayer mission gets bigger also.

The Missionaries of Charity are mostly protected from the internet, a world of information but also of endless misinformation. Google ‘why 153 fish?’ and you get 204 million answers, many drawing upon ancient mystical numerology and more current Da Vinci Code code-breaking. I don’t think we need degrees in cryptography to understand God: when He speaks to us, it’s with a view to us understanding Him, not being more puzzled. So why 153 fish? Well, whether the number was reported or not, there had to be a finite number. This number is big, like the fish themselves, and suggests Christianity—the new dragnet—is not for a chosen few, but for people of all kinds, “every nation, tribe, people and language” (Rev 7:9), a godly number of godly disciples, and a spiritual powerhouse, a living Rosary, endlessly praising God and interceding for humanity.

Twenty-five years ago the Missionaries of Charity heard Jesus first and final calls in Jerusalem and Galilee, to be the Spirit-filled people who minister divine mercy to others, and to be the fishers of men who pull in a miraculous catch drawing all sorts to Christ by your compassion and witness. Twenty-five years later you’ve dragged in a goodly number of fish for God, including more than one Rohu or Catla from India and Barramundi from Australia.

Peter’s net, our church, which you sisters sew and throw, knows no boundary or frontier, and so your communities, like that of the Church, involve diverse cultures and temperaments and works, and look outward to others of even more diverse character. One of the things the COVID-10 crisis has demonstrated, like the two endings of John’s Gospel, is the human tendency in an emergency to stick to the familiar and to draw the wagons into a tight-closed circle: and so some Australians pretty quickly started blaming other nations, pushing boats with sick people in them back out to sea, closing their homes and hearts. Your lives proclaim a different wisdom: that we must love our neighbour and keep stretching the boundaries of those we include in that category. We must keep sewing and throwing Peter’s net, casting it far and wide, inviting all kinds in. That Easter hospitality has been lived from this convent in Sydneytown for a quarter of a century now, thanks be to God; God willing, it will be for the next quarter century and more. God bless you all, silver jubilarians, and a very Happy Easter!

Welcome to our Mass this morning to mark 25 years of service by the Missionaries of Charity in the Archdiocese of Sydney. Sadly the current COVID-19 crisis means we must meet privately without your many volunteers, friends and associates present to celebrate with you, but to the extent that I can represent them all let me say: from all of us in Sydney and beyond, thank-you for the past 25 years, congratulations on your silver anniversary, and God bless you in the next quarter century and beyond.