HOMILY FOR MASS OF THE PASSION OF ST. JOHN THE BAPTIST 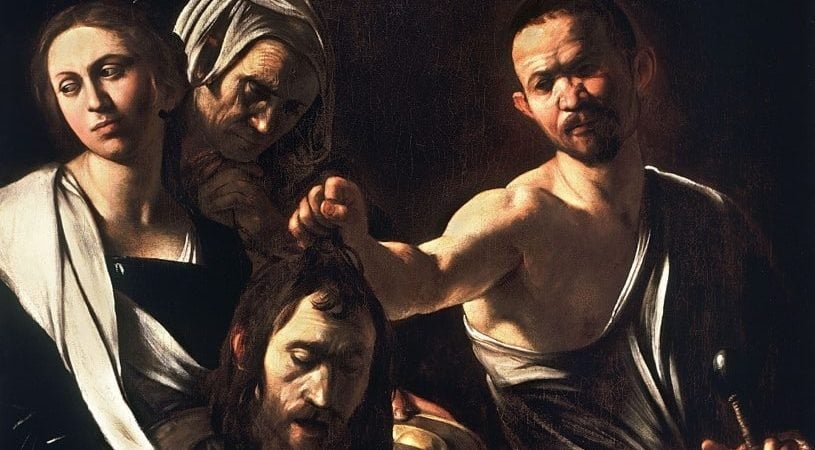 A rather gruesome story for a school Mass and a Fathers’ Day celebration, but Christianity is brutally honest about the suffering in any life. Yet our lectionary passage this morning (Mk 6:17-29) finishes too soon: St Mark tells us in the next verse that after John died, Jesus and His disciples retired to a deserted place to mourn. Thus, right from the moment of his death was John the Baptist revered. Indeed, he wasn’t only revered by Christians: the Jewish historian Josephus wrote that “John was a man endowed with all virtue, who exhorted the Jews to practice justice towards men and piety towards God; and also to baptism, preaching that they would become acceptable to God if they renounced their sins, and to the cleanness of their bodies added purity of soul.” The Ottomans, too, in due course, prided themselves on having preserved some of John’s relics – including at least one of his reputed heads!

And so all three Abrahamic faiths join in reverence and love for this prophet-Saint. By the medieval period John had become the most popular saint after Mary, so much so that in the Litany of Saints puts him before even St. Joseph, Jesus’ Step-Father. In the Middle Ages one of the most popular devotional items, found in the best Christian homes, was a carved head of St John the Baptist on a plate. Though it might seem a strange item to put near the dinner table or a child’s room, it was thought to be a good reminder of domestic virtues such as perseverance, readiness for all that comes, and humility. Don’t worry, I’m not going to suggest to the Dads here that they revive this charming household custom!

The head on a platter reminds us of John’s message: readiness, repentance, perseverance:  “Get ready,” he told us, “someone greater than me, the Messiah, is coming, so repent and be baptized, the Kingdom of heaven is at hand.” This theme was told not just in the ritual washing of John’s baptism but by his very life. John was a prophet who spoke boldly; like the prophets of old he critiqued hypocrisy even in rulers – as our first reading this morning said to John: “Brace yourself for action, stand up and tell the kings of the earth, the priests and landowners, all that I command you” (Jer 1:17-19). So fascinating was John even to Herod and so great his following among the people, that Herod had resolved to imprison him rather than execute him. And as he languished in prison his own faith was sorely tested, as must be for any innocent man imprisoned, but he continued to trust in the God’s providence slowly unravelling itself.

Yet John was no respecter of personages and his most dangerous words were reserved for Herod: he condemned his incestuous affair with his brother’s wife, Herodias, and his apparent infatuation with his niece. According to tradition, even after he was beheaded John’s head spoke to Salome to tell Herod to repent – he didn’t give up easily!

John the Baptist was celebrated as a Prophet-Saint, who persevered faithfully through hardship. But his main claim to fame was in being the Precursor – the one who came before Jesus, heralding Him by words and actions. It’s not surprising then that his life closely mirrored Jesus’ own: his miraculous conception, his life of austerity and poverty, his passion for God and the things of God. John, like Jesus, didn’t marry. He spent much of his life on the margins of society. The two met as unborn babies and perhaps as children. They met again at the River Jordan when John baptized Jesus and joined God the Father in pointing to the Saviour. Like Jesus, John’s personality and message drew crowds but also invited rejection, and ultimately martyrdom.

The last three popes have all pointed to St Joseph as a model of protecting the Virgin and Child – from gossiping neighbours, ambitious kings, violent soldiers, as well as from economic and emotional insecurity.[1] Joseph is a real model for our fathers whom we celebrate today and pray for. But John the Baptist also teaches us about spiritual fatherhood. Though he could be a forceful preacher, John never imposed his faith on anyone: he exhorted people, King Herod and Queen Herodias included, and some repented, becoming his spiritual children through baptism. A true Christian father, as St John Paul II once observed, “presupposes a profound respect for the equal dignity” of his wife and children, and founds his life on gentleness not coercion, on self-giving not self-gratification, on respecting never abusing.[2] To do this kind of gentle, respectful, self-giving fathering, Pope Francis has emphasised, a father must be present: work, finances, leisure, nothing must separate him from his loved ones.[3] This is true both of our spiritual fathers and our familial ones.

The head on a platter tells us John’s journey with Christ was literally cut short. He didn’t get to see the Transfiguration, Resurrection or Ascension. His fate was to join Adam and Eve and the prophets awaiting and then following Christ into heaven. But even in death John was an example of all he was in life: courageous, humble, persevering, single-minded in pointing to Christ and God’s holy laws. His loudest message to us was this: imitate me as I imitate Christ; like me, decrease so Christ increases in you. Our fathers, too, model for us Christian virtues that we, their children, might mirror. God bless you Dads!

INTRODUCTION TO MASS OF THE PASSION OF ST. JOHN THE BAPTIST

Welcome to this morning’s Mass on the Memorial of the Passion of St John the Baptist, as I begin my canonical visitation of St Gabriel’s Bexley, St Mary MacKillop Rockdale City and St Francis Xavier Arncliffe. It is my special pleasure to welcome the children from our school and their fathers to celebrate this Fathers’ Day Mass. Over the coming days I will encounter the leaders, staff, children and parents of our three primary schools and Marist College Kogarah, offer Mass in the three churches, and meet with the clergy, ministry leaders, pastoral staff and parishioners of the three parishes, including visiting the sick. I hope to learn from you all about the gifts and challenges, opportunities and hopes you have for your Church. I thank Fr Yacub and Fr Frank for your welcome this morning. To everyone present this morning, especially the Dads, a very warm welcome!