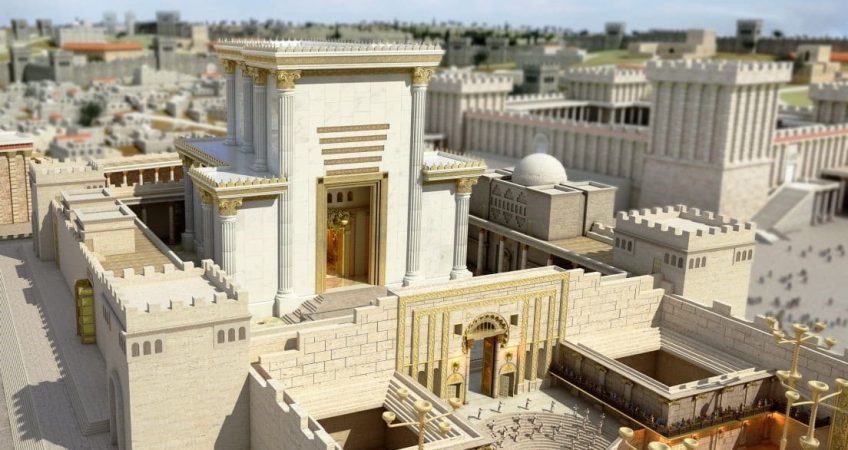 The 19th century Scottish author, George Macdonald, was something of a renaissance man. A minister, Christian apologist, poet, and pioneer in fantasy fiction, he was a major influence on well-known authors such as J.R.R. Tolkien, C.S. Lewis and G.K. Chesterton.

Among Macdonald’s published poems is one titled simply “The Shortest and Sweetest of Songs”. The title is in fact longer than the poem itself which contains but two words:

The poignancy of these two words, separated by a line, is undeniable. The poem could be addressing anyone, or, indeed, everyone. Is it a directive? A plea? A hope? Whatever we might make of it in literary terms, it seems to me that this ‘shortest and sweetest of songs’ has much to say about today’s celebration…

Our readings today – and our celebration itself – are about buildings with which we have such intimacy that we might call them ‘home’ and going to them ‘homecoming’. Solomon cries out to God to watch over the new-built temple from his dwelling in heaven (1 Kgs 8:22-30), making the Jerusalem Temple His home-away-from-home, hearing intercessions from it, and granting forgiveness in it. So, too, do we entreat God to make this place His home, watch over it, hear our cries, and show us His mercy.

In our Gospel passage (Jn 2:13-21) Jesus confirms that the Jerusalem Temple, like this church we dedicate today, is indeed the house of God, and He lets us glimpse his anger at it have been turned into a profit-making enterprise. In driving the money-changers out, Christ was really inviting us all in – because, while ever it looked more like a bank or supermarket, people were never going to relate to it as the House of the Lord or as their home.

God calls for us, like the unnamed speaker of George Macdonald’s poem, to return to Him. To call going to God ‘coming home’ is to assume our identity as members of God’s household while on earth and as destined to heaven in the end. Our church building that we consecrate this morning is God’s house and so ours, but also an entrance hall to our eternal home.

What’s more, St Paul suggests in his epistle (Eph 2:19-22), this church must be more than a stony Temple: it must symbolize the prior and more important Church made not of stones but of apostles and prophets and ourselves “with Christ Jesus Himself for its main cornerstone”. We must make of ourselves and our community a Temple so others may find a spiritual home with us. Whether you are a little chapel or a grand basilica, you must be a dwelling for the Holy Spirit! And because stones can crack, bricks be faulty, God calls us back home, so He can hear and heal us.

Today, one hundred years after the first Mass in the district and sixty years after the completion of this church, we’ll witness a pagan girl, named Ecclesia, completing her initiation as a Christian. At the start of Mass I ‘baptised’ her, as it were, sprinkling the walls and altar with baptismal water recalling the original blessing by Archbishop Gilroy. Now, she is instructed through a ‘mystagogia’ of readings and preaching: are you listening altar, paying attention walls?

Next we profess our faith with our stony catechumen and pray for her, invoking the saints as we do for catechumens on Easter night. Then comes her ‘Confirmation’, as we call down the fiery Spirit and anoint her with Chrism. The beautiful prayer recalls our family history and expresses our hopes for her future. After she receives the Chrism she will be clothed in Easter white and given candles to symbolise her enlightenment. Then she will be fit to celebrate the Eucharist…

Stone and fire, oil and incense recall ancient sacrifices that foreshadowed Christ. But today we initiate our church and altar with water and sacred chrism as only Christians are initiated. We trace crosses in the middle and all four corners of the altar to recall the crucifixion by which all ancient rites are superseded.

This ‘shortest and sweetest of songs’ embodies Christ’s personal call into His household the Church, to His bath room our font and His dinner table our altar, to intimacy with Him in His loungeroom at home. But lest we get too comfie we realize it is also a call to action, to be living examples of the inanimate church of Berala, to be through our works of outreach, catechesis, justice and mercy, a call home to others. And there could be no better example of this than your parish patron.

Peter was an esteemed French priest with a hankering for missionary work. To that end he joined the newly formed Society of Mary or Marist Order in 1831. In 1836 he was sent as Superior of a little band of missionaries to the Pacific.

French Catholics were first to bring the faith to much of Oceania, but English Protestants beat them to Australia by a few weeks; otherwise we might have been a Francophone nation. The Marists did, of course, get St Patrick’s Church Hill, a shrine very precious to this country. But most Marists found themselves in Polynesia and Melanesia, including such exotic destinations as the Friendly Islands and Futuna. Peter’s pastoral care of the sick and suffering earned the respect of the natives; his simple preaching about the love of God won their devotion; and both earned him the jealousy of the local chief who had him clubbed to death. From heaven he now calls us again to be missionaries alongside him, not in some exotic Pacific paradise, but in deepest, darkest downtown Berala!

As we rededicate our church to his patronage, let us consider what these beautiful rites say to the initiation and missionary call to each one in this community.

Welcome to our Solemn Mass celebrating the dedication of this Church of St Peter Chanel and the installation of a relic of your patron saint who was the first Christian martyr of the South Pacific. The earliest records show that Berala (or Hyde Park as it was known) was part of Lidcombe parish when in September 1919 Mass was celebrated for the first time in a hall on Third Avenue. In 1937 my predecessor Archbishop Kelly established the parochial district of Berala. The school doubled as a Mass centre until the building of a church was approved in 1956. Completed in 1959, it became a landmark of the district.

As we celebrate the centenary of the first Mass in Berala and the Diamond Jubilee of this church, it is high time it was formally consecrated! The ceremony is one of the most ancient and beautiful of the Catholic Church – one few Catholics ever get to see. Like the stages of initiation of a new Christian, you’ll witness the ‘Baptism’ of the church and altar with holy water, its being preached to from the ambo, its ‘Confirmation’ with sacred Chrism, the altar being dressed in white and given a fiery candle, and the celebration of its ‘Holy Communion’. So it is a chance for each of us to reflect on our own journey of faith as a Christian.

Concelebrating with me today is your parish priest Fr. Thomas Kurunthanam; Fr Ray Farrell from St. Joachim’s; Fr Terry Bell, the former assistant priest here at Berala; and Fr Kevin Bates SM, who wrote the Chanel Anthem for the parish. I acknowledge also Brother Tony Vaughan SM, a long-time associate of the parish; and members of other religious congregations.

A very special thank you to builders and sponsors Tony Draybi, with his wife Antoinette, and Zak Younan represented by his wife Ramsina. And to all members and friends of the parish of St. Peter Chanel & St. Joseph, a very warm welcome!