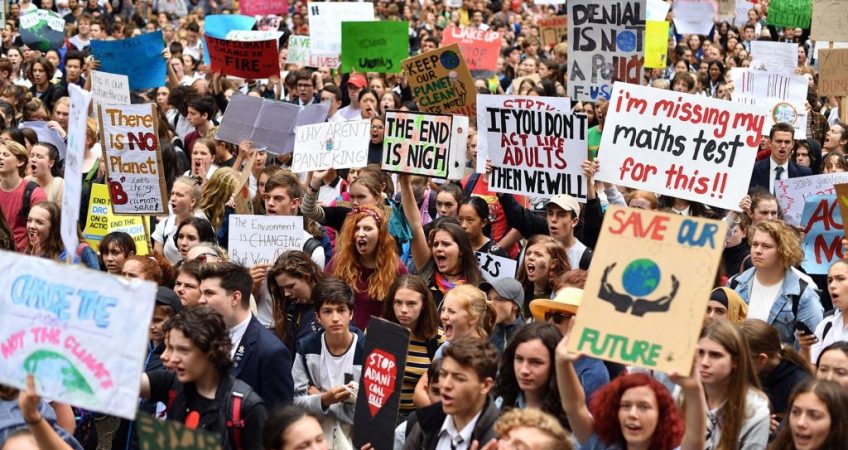 Part of the genius of Christianity over the centuries has been its ability to take to itself a whole menagerie of ideas that come from outside it. In our own age the analytical philosophy, democratic politics, capitalist economics, Marxist analysis, human rights advocacy, feminist critique and psychological consciousness – all prominent in the secular world – are not only criticized by Christians but to some extent were originally inspired by Christianity or subsequently ‘baptized’ and incorporated into it – with various degrees of success. Following Swedish teen Greta Thunberg’s apocalyptic speech at the United Nations, the ‘Climate Strikes’ she inspired that drew tens of thousands of school students around Australia last month, the more troublesome tactics of the ‘Extinction Rebellion’ movement and our own Synod on the Amazon that wound up on the weekend, we cannot but consider one of the most recent examples of this: ecologism.

It’s almost trite to observe that environmentalism has become a substitute religion for some who’ve abandoned traditional faith. Michael Crichton, the best-selling author of Jurassic Park, The Andromeda Strain and other classics, spoke before he died of environmentalism as “the religion of choice for urban atheists”, a religion that ‘remaps’ Judeo-Christian beliefs along these lines: “There’s an initial Eden, a paradise, a state of grace and unity with nature. There’s a fall from grace into a state of pollution, as a result of eating from the tree of knowledge, and as a result of our actions there is a judgment day coming for us all. We are all energy sinners, doomed to die, unless we seek salvation, which is now called sustainability. Sustainability is salvation in the church of the environment. Just as organic food is its communion, that pesticide-free wafer that the right people with the right beliefs, imbibe.” The adherents of this faith demonstrate quasi-religious dogmatism and zeal, priests and priestesses, creeds and even rituals.

Thus various perhaps ‘ecotheologies’ and ‘creation spiritualities’ are now confessed by the theologically fashionable: always either romantic or apocalyptic or both, often eclectic, sometimes flirting with pre-Christian animism or post-Christian pantheism. But there are also some serious-minded Christians, including our present Holy Father, now reflecting on the implications of the rise of the green movement for Christian thinking and doing. This is supported, of course, by a long tradition of Christian social teaching on stewardship of creation, the importance of global solidarity, and duties to future generations. As with the mediaeval synthesis of Aristotelian philosophy and Augustinian theology or the more revent synthesis of Marxist analysis and biblical exegesis in liberation theology, some react to the green turn in theology with immediate hostility; others with blind and unadulterated enthusiasm; and yet others with interest, caution or ambivalence.

Tonight’s epistle is the favourite of ecotheologians (Rom 8:18-25). They consider it a rare moment, amidst so much anthropocentric, environment-exploiting religion, of a very different tune. Paul here celebrates the beauty of a cosmos giving birth and revealing ‘the freedom and glory of the children of God’. He seems to suggest, perhaps more powerfully than anywhere else in Scripture, that creation is not just a plaything to be used up at our whim, but a work of art with value in itself, with a future under grace, and the context for our flourishing.

Such a reading of our epistle certainly suits the current mood, with its horror at environmental degradation, resource depletion, and climate effects such as extreme weather events, water shortages, dying coral reefs, rising sea-levels and a burning Amazon jungle. Creation is certainly groaning under the weight of human mismanagement. This text also sits comfortably with the Christian challenge to the dehumanizing and globally fatal values of acquisitive materialism and throw-away consumerism, proposing instead a greater reverence for the natural world.

Which is true, as far as it goes. But a close reading of the text shows that Paul doesn’t romanticize nature as something ‘good’, to which ‘bad’ human beings are opposed as rapists and looters. He’s acutely aware of creation’s own captivity, suffering, moaning, its own need and eager longing for renewal, restoration, glorification. In the jungle world of survival of fittest, there is little respect for the beautiful and no hope for the weak.

So nature, even in Paul’s most cosmological writing, is not the source of grace and character: we have only to watch sea-gulls fighting over scraps to understand they are no models of virtue. The natural order is as ‘broken’ or ‘fallen’ as our human nature. Creation, according to Paul, is “enslaved to decadence” and longing to be otherwise. And that great liberation, that universal redemption, when it comes, will not be the work of nature itself, but of divine grace and human action co-operating to improve the physical, social and spiritual environment, and ultimately transfiguring it in the Second Coming.

Thus the secret to right relationship between the human and non-human environments is for us to learn to be – like Christ – at home in God’s world of great wonders and immense beauty (see Col 1:12-20). Once it’s known and loved in God, we can neither exploit creation with callous disregard, nor turn it into another idol beside the totems of materialism and consumerism. We will, rather, cherish and seek to improve the physical, social and spiritual environments. Thus in his encyclical, Laudato Si, Pope Francis beautifully explores the three main concerns of his name-saint: love for the natural world and its creatures, love for humanity and especially the poor, and love for the Creator of them all. He calls for a radical rethink of our relationship with all three.

Pope Francis’ concern is not with the environment narrowly considered – our house, so to speak – but with the entire physical-moral-spiritual ‘ecosystem’ – our common home – and the relationships human beings have there with their Creator, the world and each other. He speaks to contemporary Sydney with all its natural and social beauty, its potential and its challenges, about our attitudes to our own bodies, including the need to live a healthy masculinity or femininity; about the poor quality of life common in such cities, with their anonymity and frenetic pace, their broken relationships and lack of inter-generational responsibility; and about wrong attitudes to the natural environment. He critiques the voracious consumerism of the ‘throwaway society’, the naïve belief in unlimited material progress, the perils of the technological imperative, and the dangerous relativism behind so much of this thinking and behaviour. Echoing the Scriptures and Tradition he calls us to a simpler, humbler, more ascetical lifestyle – a call both very traditional and very contemporary.

As stewards of creation by virtue of your humanity, future vinedressers in the vineyard of the Church by virtue of walking the Way, and future shepherds in the sheep pasture of God’s kingdom by virtue of priesthood, these concerns should not be far from your minds. The inextricable link between love of the Creator and love of His creation means a very particular Christian take on pastoral care. Where others look to political, financial or technological fixes to our world problems, the Church proposes moral and spiritual conversion prior to any such action. As St. Paul puts it so well today: we are one with all creation; we too groan inwardly as we await our bodily glorification and that of the whole cosmos; this is our Christian hope.