HOMILY FOR MASS FOR THURSDAY OF THE 5TH WEEK OF EASTER 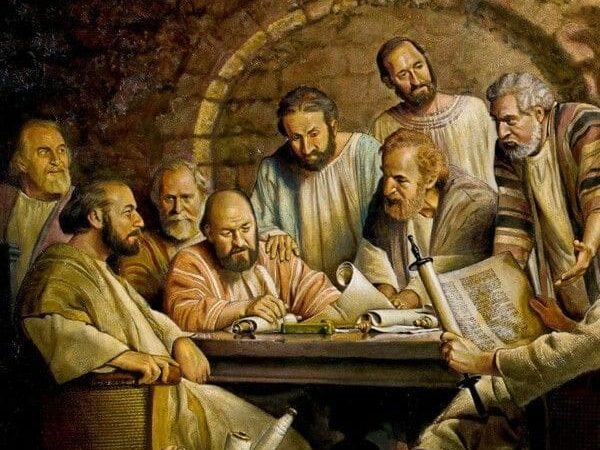 The dispute had been brewing for some time. Luke’s rather tactful description was that in Antioch and elsewhere there had been ook oligis οὐκ ὀλίγης ‘no small’ dissension and debate (Acts 15:2). The Christian instinct in the face of equivocation, confusion and polarisation was to gather. To pray. To share experiences and opinions. To listen to each other. Hopefully to hear God in the process. So representatives were sent to put their case to the so-called Council of Jerusalem – the first church synod, plenary council or Catholic education conference (Acts 15:7-21).

The particular matter troubling the early Church was just how inclusive to be. Should non-Jews be admitted to the fold, to Baptism, Eucharist and the rest. If so, what should be expected of them by way of conversion, formation, identity, conformity. Circumcision was a big ask for adult converts; so, too, the kosher laws for those living in the non-Jewish world. But if Christianity is about conversion from an old self to new, we can’t just remain the same. Nor can it be the old Law for some and anything goes for others: that would be dis-unity, un-communion. What to do?

‘We’re supposed to be lifting burdens not imposing them,’ says Peter. ‘There’s every sign the newcomers have faith and the Holy Spirit as much as we do. The grace of the Lord Jesus suffices.’ This silences everyone. Barnabas and Paul then tell stories of what’s working in the gentile churches. Now it’s James’ turn. After Peter, he has the most authority (cf. Acts 12:17; 21:18; 1Cor 15:7; Gal 1:19; 2:9; Jas 1:1) and a reputation as a hardliner. He loved the traditions, was strong on Jewish-Catholic identity. Some of his party were very demanding (cf. Gal 2:12). He was not expected to budge.

But budge he did. ‘We all know God’s promise that all families of the earth will be blessed in Abraham,’ James argues (cf. Gen 12:3). ‘Well, now Simon has identified how God is enlisting a people for His name out of the pagans. Who are we to resist?’ It’s a big claim, this one. Previously the Jews reserved the term ‘People of God’ for themselves as distinct from the Gentiles (e.g. Ex 19:9; Dt 7:6; 14:2). Now James the traditionalist is calling the Gentiles the new Israel, or new members of Israel, conscripted not by Peter or Paul but by God Himself. Unusually, he seems to be siding with the Paul who says no more Jew or Gentile, but Christians only (Gal 3:28).

What might this say two millennia later to another group of Christian leaders gathered in conference to pray, listen, plan? Well, one thing James is not advocating is the ‘inclusiveness’ of the modern PC or ‘woke’ kind! He doesn’t think everyone should be enrolled in the first Christian schools or congregations. There has to be some willingness to actually join in our life, not just be a spectator; some openness to a movement of grace, not a grim resistance to being moved. So James proposed – and the early Church agreed – that a bare minimum would be to avoid idolatry, fornication and sausages. I’ll come back to the last one. The first two are more fundamental. Love of God and love of neighbour must come first, and in the commandments and beatitudes God has given us a guide to genuine loving. Remaining in God’s love, as Jesus reminds us today, is not just about holding hands and singing Kumbaya – it means keeping His commandments (Jn 15:9-11). Promiscuity, whether with gods or partners, is just not on!

So, if Jesus and the first Christians are not proposing an anything-goes inclusiveness, if Catholic teaching about faith and morals are our touchstone, what is this new openness? Well, it’s clear from this point on in the New Testament that no racial, ethnic, class or customary boundaries can be barriers to our welcome. But what about the eaters of pork, blood, strangled animals? God might have revealed to Peter that all animals are ritually clean (Acts ch 10), but James couldn’t come at the democracy sausage. In time, that would change, as Christians moved into various cultures and distinguished divine law from human custom. But absolutes such as fidelity to God and spouse, reverence for the holy and for the body, remained.

Our conference, like that back in 50 AD, is asking what matters most. The official theme makes it clear that faith comes before self-imposed KPIs and bureaucratic accountabilities, funding and lobbying, NAPLAN results and the rest. So do learning and wellbeing. And the three come together. Indeed, as Catholic education has evolved down the centuries we have come to realize that faith is transmitted not solely or even principally through R.E. classes taught by gurus, or through the other official religion bits such as class Masses – important as these are – but through all the whole educational experience and all our care for the children. Faith, which is to say, remaining in Christ’s love, is the whole project of the Catholic school, not just the icing of RE curriculum and symbols. And that’s why the battle for the freedom to enrol, employ and educate according to our own lights as Christians is so important, even as our first instinct is always to include and enlarge, not to block and quarantine.

The Apostle James’ insight that ours is a place where God is making a people and Jesus’ teaching that that people must be assisted to remain in His love – this must inform our labours in transmitting faith, ensuring learning, and maximising wellbeing. An event such as the Australian Catholic Youth Festival to be held in December is an example of parishes and schools trying to integrate these aspirations and deepen connections with young people. As I recall with gratitude the remarkable contribution you all made to the last national youth festival here in Sydney, I commend the upcoming Perth event to you all.

In the face of a longer-term secularising tide, the aftershocks of the Royal Commission, the continuing hostility in sections of the media, law and academy, the growing disconnect of some parents from parish and even school, lay Catholic leaders like yourselves could easily be demoralised. Even at family or social occasions you may be unsure how closely to identify closely with an institution that is ‘on the nose’ for many people. Sometimes you may be tempted to give up on evangelisation, catechesis, formation, vocations. I understand that and I am deeply grateful that you perseverance through such times. I know it is because you love your God, your Church, your young people – however flawed the Church and the children might sometimes be. With Peter, Paul and James we know we have something precious to offer in Christian faith and identity, the means to abide in God’s love. Thanks be to God for you!

INTRODUCTION TO MASS FOR THURSDAY OF THE 5TH WEEK OF EASTER

Welcome to St Mary’s Cathedral for the Conference Mass for the biennial conference of the Association of Catholic School Principals. I welcome in particular leaders from Catholic Schools New South Wales, the Directors of Education from several dioceses, as well as the principals of many schools, and other education leaders. I thank you for all your contributions to the great mission of Catholic education in today’s world. Concelebrating with me today are Frs Gary Perritt, Fr Maurice Thompson and To everyone present, a very warm welcome!