HOMILY FOR MASS FOR THE 4TH SUNDAY OF ADVENT A 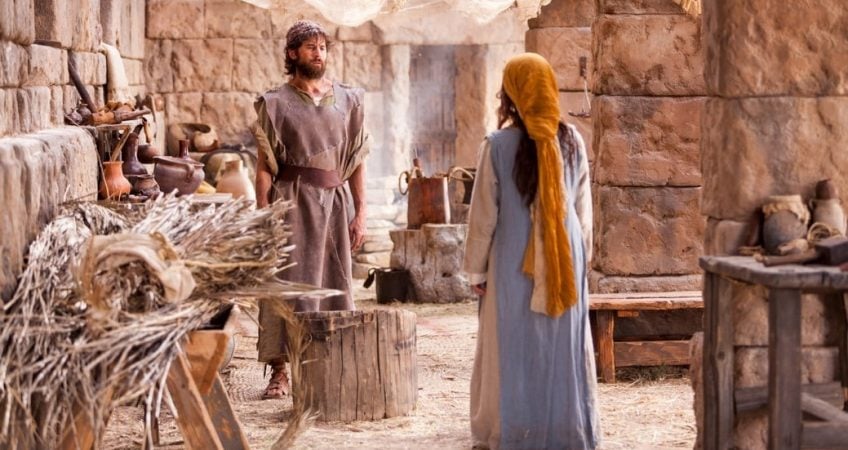 When Joseph hears that his young fiancée Mary is pregnant, he’s agog and aggrieved(Mt 1:18-24). Perhaps he thinks she’s been unfaithful, or been violated, or is delusional. There’s probably been gossip about Mary and even about Joseph. He knows the child isn’t his, and so his long genealogy, which he retold with Matthew immediately before today’s Gospel reading (Mt 1:1-17) would be irrelevant. We can only imagine the confusion, hurt and anger of this ‘man of honour’.

Under the laws of his people, Joseph had the right to name and shame Mary publicly, to require a trial, and to have her stoned if found unfaithful (Dt 22:23-30). It parallels the shaming culture of our own day, in which people find embarrassing photos or gossip about them spread far and wide by the social media, or are convicted in the court of public opinion on very little evidence. But the same righteousness that meant Joseph was so troubled by his bride-to-be’s pregnancy also meant he would not risk her life and reputation or that of her child. So he resolves to put her away discreetly, to avoid publicity, and allow her as much dignity and safety as possible.

It brings to mind a later Gospel story. Jesus is all grown up, and people have set a trap for Him: they bring Him a woman caught in adultery (Jn 8:1-11). Like Joseph before him, He’s wedged between the public expectation that He’ll follow the Mosaic law and have the woman stoned; and an equally strong expectation that He’ll exemplify the law of love and have the woman bailed. Jesus, of course, absolves her, restores her dignity – and sends her accusers packing. Perhaps Joseph had taught him explicitly as He was growing up how to lean when facing the inevitable tensions between law and equity, between being a person of principle and a person of compassion, between upholding standards and avoiding humiliating others, between judgment and openness. Joseph had every legal right to condemn Mary, but he recognised her goodness and knew that at the heart of the Law he honoured was an insistence on the dignity of every human person, no matter what they’ve done or are rumoured to have done.

Joseph’s story goes to the heart of Advent. Unawares he makes space for the miracle of Christmas because he seeks to protect life, restore honour and demonstrate compassion in a world where life is cheap, discredit easy, and mercy rare. And he keeps doing so in the years ahead: as he searches high and low for a place for his wife to give birth securely, as he eludes Herod’s grip and takes both Madonna and Child to safety in Egypt, and as he leads the search for the adolescent Boy when He goes missing. Joseph foreshadows the Christmas God who offers safety to every human soul, redemption where there has been dishonour, and mercy to the whole human race!

Joseph makes space for the miracle of Christmas in another way also: his openness and trust. In dreamy contemplation he allows his mind to be persuaded by God’s angel that Mary cannot have been unfaithful and that what is in her is of the Holy Spirit. He opens his heart to this unexpected Child and adopts Him into the Davidic lineage. He embraces a future of surprises that will include training in his carpenter’s workshop the Master-craftsman of the universe, and pondering with his wife a Boy who taught the teachers in the Temple. Joseph introduces the God who at Christmas will fill the heavens and earth with wonder at His birth and then adopt us into His very family, the children of God!

Where St Luke’s infancy narrative gives Mary the limelight, St Matthew’s attention to Joseph can seem patriarchal, even sexist by today’s standards. Yet there’s more going on here than that. Matthew tells us today who Jesus is: Jesus, he says, is the Christ or Messiah. He is the Son of God, with no natural father, come through the Holy Spirit. He is עִמָּנוּאֵל Immanuel God-with-us – and God for us. He is ישוע Yeshua or Jesus, God-saves – God who saves us. He’s no ordinary guy! His mother, too, is pretty special: she is “full of grace”, conceives by power of the Holy Spirit, is both Virgin and Mother. Eventually we’ll realise she was sinless from conception and all her life. We can feel rather mundane by comparison to that Mother and Child; Joseph no doubt did. But by showing how Joseph, ordinary as he was, could fit his life to God’s plan for salvation, we are given an example, a prod, and confidence to do the same. So Joseph makes space for Christmas in a third way: giving Advent encouragement to ordinary people to prepare the way for the Lord.

Over the past four weeks, we have been preparing a way for the Lord in our minds and hearts and lives. We’ve observed a reverse chronology: in the first week of Advent we focused on the future, the end of time, in recognition of who Jesus will be when He comes again – as Judge (Mt 24:37-44). In the second and third weeks we addressed the present, with an acknowledgement of who Jesus is – the Christ (Mt 3:1-12; 11:2-11). Now on the fourth Sunday we look back two thousand years to His conception in appreciation of who He was for our sakes – the Christmas Babe (Mt 1:18-24). All time – past, present and future – are contained within the four walls of Advent. But we enter those walls for the sole purpose of preparing for Christmas, for being with Christ, indeed for being Christmassed ourselves.

When we look to the future, we often make a statement of our goals, our KPIs, what it is we want to achieve. In this case you might say the answer’s easy: heaven. Knowing our goal, we work backwards from there, to reflect on what we must do now to eventually reach that goal. We attend to the Baptist’s urgent call to repent and believe and live a new kind of life. But knowing your goal and the best way to get there is not enough: we must also have the will, the character, be the person to aspire to such a goal and do such things. And it’s Joseph’s story that exemplifies the personality we ordinary people need, the virtues we must cultivate: righteousness and resolve, with compassion and openness; a habit of saving life and restoring dignity, rather than avenging and humiliating; the capacity to wonder, hope, prepare.

In the ‘last shopping days till Christmas’ Joseph didn’t focus on buying up consumables, wrapping and bowing them for gifting, or peeling and stuffing them for eating. No, Joseph concentrated on making space for the miracle of Christmas – in his own heart and life, and in the people he affected around him. Let’s do the same.

INTRODUCTION TO MASS FOR THE 4TH SUNDAY OF ADVENT A

To everyone present this morning for the Solemn Mass for the Fourth Sunday of Advent, a very warm welcome to St Mary’s Basilica. Christmas is almost upon us and this is a last chance to sweep out the stable of our souls so we can receive the Christ-child at His Nativity. So as we light the final candle of our Advent wreath we repent of our sins…