HOMILY FOR MASS FOR THE 30TH SUNDAY OF ORDINARY TIME C 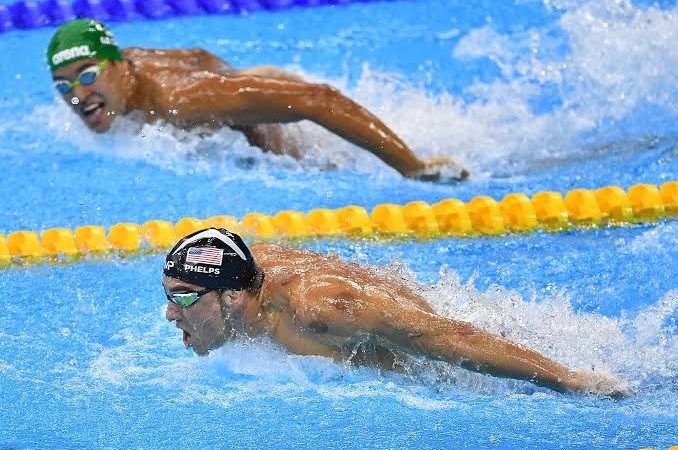 After the 2016 Rio Olympics, an image went viral of the American swimmer, Michael Phelps, and the one in the next lane, Chad le Clos. Phelps is focused solely on the finishing line, but le Clos is turned towards his arch-rival Phelps. A meme popularised alongside the photo ran: “Winners focus on winning, losers focus on winners.” Sure enough, Phelps emerged with his 20th Olympic gold medal for the 200 metre butterfly race.

Now, you might be thinking: yet another sports-obsessed priest! Were it football season, he’d be giving us the scores for the Sharks game. Well, I blame St Paul: a well-educated citizen of the ancient world, he was no stranger to the gymnasium and the games. And so in his First Letter to the Corinthians he tells his readers that not everyone in a race gets the prize so they should “run to win! Everyone who competes in the games trains with strict discipline. They do it for a crown that is perishable, but we do it for one that is imperishable. Therefore I do not run aimlessly; I do not fight like one punching the air” (1Cor 9:24-6). He also tells the Christians in Philippi, “Forgetting what is behind and straining toward what is ahead, I press on toward the goal, to win the prize of God’s heavenly calling in Christ Jesus” (Phil 3:13-4). In his two letters to the young bishop Timothy, Paul tells him repeatedly to “fight the good fight of the faith” (1Tim 1:18; 6:11-12; 2Tim 2:5) and in the section we read today he says done this himself, fighting the good fight and running the race to the finish (2Tim 4:6-8, 16-8)..

Two men go to church in our Gospel parable this morning, a theologian and a taxman. The Pharisee is the popular favourite: he has medals in fasting and almsgiving, and is now competing for the ‘prayer’ laurel also. The tax-collector, on the other hand, is a rank outsider – a notorious extortionist, collaborator with the Roman oppressors, all-round bad boy. The holiness competition looks settled before it’s even begun: how could anyone expect the outsider to prevail over the popular favourite?

The Pharisee’s confidence is understandable enough. But like the hare in another fabled race, he’s too cocky. “Thank God, I’m not like the rest of humankind,” he declares. As St. Augustine points out, “He might at least have said ‘not like many other people’, for at least then he wouldn’t be setting himself apart as the only just person.”[1] But no, our guy thinks he’s the greatest and says so.

Then he looks round and sees a tax collector grovelling at the back of the church, like a typical Catholic fighting for the back pew. He immediately focuses, not on his heavenly goal but on his earthly rival. “Thank God, I’m not like him,” he celebrates. We search his words in vain for a hint of genuine prayer, of praising God and begging for his own needs. But if two men went up to the Temple to pray, only one prayed. Two went to praise God, but one praised himself instead.[2]

The result? The Pharisee leaves church without putting things right with God, while the tax collector leaves forgiven. The king of the ring’s fight is no longer the good fight; his race is left unfinished. All the fasting, almsgiving and pseudo-prayer come to nought. His mistake? “Winners focus on winning, losers focus on winners.” Like de Clos, the Pharisee attended not to his own race, not to the rules of the game, not even to the prize, but to the other athletes.

The tax collector, on the other hand, stays focused on the goal, striving for the touchpad on the end wall of the pool. He might have made a bad start, might not have been much chop mid-race, but he puts all his might into reaching the end. Nothing will distract him from this goal. Eyes lowered, he beats his breast in the Confiteor like we do, admitting his own failings. He doesn’t even notice the Pharisee, let alone compare himself with him. His only hope is for a personal best and so he begs God for forgiveness, exposing his need. In that vulnerable moment God recognises someone crying out for help even as he tries his best, and welcomes him to the podium.

The St Aloysius Gonzaga “swim team” that is your parish has many accolades of which to be proud. I’ve heard from your pastor, lay leaders and faithful not just what you’ve achieved but of your aspirations to do some new things or some old things better. As I complete my Visitation, I conclude that much good is happening here, including leadership and teaching, worship and devotions, ministries and groups. But that’s no cause for complacency. Fewer than 1 in 12 Catholics from the Shire is at Mass on a Sunday. So I challenge you all to consider how you might reach out to the remaining 11 out of 12; to invite and include them in this team; to support them in their individual races, and offer to run alongside them, as we strive together for gold and for God (cf. Phil 3:14).

Like the Pharisee and the tax collector, like Phelps and de Clos, we have a choice, not just individually but as a parish. We can act as if the race were already run, as we smugly measure ourselves against others, telling ourselves that whatever wrong we’re doing everyone’s doing it, or worse, and that however limited our generosity there are others more stingy than us. We can behave as if the prize were already won, because we think everyone gets a prize, that heaven is compulsory, or that you don’t have to follow the rules or attend the practices to win in spiritual sports.

Or we can practise with all our might, follow the code set down by Christ, and work for a personal best and with our team, challenging each other by our zeal, supporting each other in our weakness, making this a relay race that we can win together. And what a coach we have in Jesus! What a cheer squad in the Church! What a performance enhancing substance in the Holy Eucharist! If we focus on God, alone and together, presenting our needs to Him, in all humility, we can hope the crown will be ours. And this crown, St. John Chrysostom reminds us, is not made of ordinary laurel leaves, but of what never withers; it is placed on our heads not by a fallible referee, but by Christ Himself; and the crowd that cheers us on is made up, not merely of mortal men, but of “a stadium full of angels and saints”.[3] God bless St Aloysius parish!

INTRODUCTION TO MASS FOR THE 30TH SUNDAY OF ORDINARY TIME C

Welcome to this morning’s Mass for the 30th Sunday of Ordinary Time. This week I’ve conducted my canonical visitation of the Parish of St Aloysius Gonzaga, and so been treated to:

While I’ve met some of you already, I hope others will catch me at our morning tea after Mass to share your hopes for the parish or challenges with me.

I acknowledge Fr James McCarthy, your parish priest, and I thank him and you all for the warm welcome I’ve received. I commend you all on so much good that is happening here in St. Aloysius. To everyone present this morning a very warm welcome!