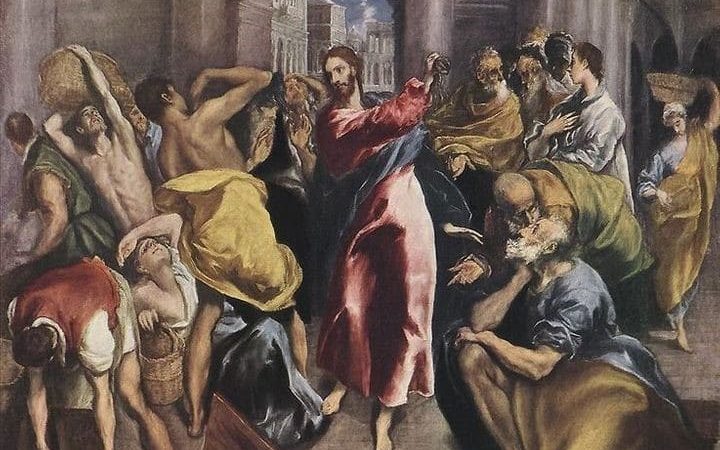 St Dominic was a paradoxical figure. “His face was always radiant,” Blessed Jordan chronicled, and “by his cheerfulness he easily won the love of everybody. Without difficulty he found his way into people’s hearts as soon as they saw him.” Blessed Cecilia likewise said that “a kind of radiance shone from his face… which drew everyone to venerate and love him. He always appeared cheerful and happy.”[i] There is a very unFranciscan story of the Evil One coming to interrupt St Dominic’s preaching disguised as a noisy bird. The saint knew him for who he was – only the Devil would interrupt a Dominican’s preaching – caught the creature and plucked it alive, at which moment it was revealed as a demon. The saint and all the Dominicans present burst out laughing. So we remember Dominic as the joyful friar.

Yet he was crying all the time. Jordan chronicled that “Whilst Dominic laboured to make his own soul pleasing to God… he was consumed with an ardent zeal for the salvation of infidels and sinners. To move the divine mercy to regard them with pity, he often spent whole nights in the church at prayer, watering the steps of the altar with abundance of tears, sighing and groaning before the Father of mercy, in the earnestness and deep affliction of his heart; never ceasing to beg… the grace to gain some of those unhappy souls to Christ.” He would even fall down weeping in Mass and have to be exhorted by the brethren to “Arise Father Dominic” and finish the Eucharistic Prayer! So happy and so sad…

There’s something of the same paradox about Jesus. So often He’s calming storms, casting out demons, healing sicknesses, comforting suffering. He befriends all sorts and loves to party. He speaks over and over of love and mercy. He says “Blessed are the peace-makers” (Mt 5:9) and “My peace I leave with you” (Jn 14:27), and “put away the sword” (Mt 26:52). Charles Wesley famously hymned him as Gentle Jesus Meek and Mild.

Yet that’s not the Jesus we see in today’s Gospel (Lk 12:49-53). “I’ve come to bring fire upon the earth,” He says, “not peace but division.” Like that day He ran through the Temple with a whip, chasing out the money-changers and overturning their tables. Or those occasions when He chided the Scribes and Pharisees, the hypocrites and wealthy. Is Jesus moody? Or is it, like Dominic, a case of a rich character confronting a complicated world?

Well, this much is clear: when Jesus offers peace it’s not the kind we find in this world (Jn 14:27). Jesus’ peace is not the ‘interior peace’ of the self-satisfied, in denial about the troubles of this world or indifferent to them, enjoying the warm contentment of someone on morphine. Nor is it an ‘exterior peace’ achieved by keeping our distance from people, from noise, from discontent; a sort of ‘good manners’ parading as peace by keeping tensions under wraps, avoiding challenging topics, anything for the quiet life. That only leave the causes of antagonism unaddressed, maintaining the illusion of tranquillity while planting seeds of future conflict.

Whether He is preaching peace or division, Jesus means something different to our ordinary account of these things, and so too when He was experiencing joy or sadness. To begin with, like St Dominic after Him, He believed it is the truth that sets us free (Jn 8:31-32): authentic peace can only be founded upon a deep realism about the human condition in all its complexity. Jesus knew about the human mess, that maintaining good relationships and building community is not always easy. He saw broken families and foresaw that faith in Him might divide some. He met indifference, hatred, even attempts on His life. He brushed up against the rich and powerful, ideologues and resistant disciples. Ultimately He was tortured, tried and brutally executed – that Baptism of fire that He predicted today. While confident innocence is vindicated in the end, Jesus knew it could suffer in this life and justice come only with terrifying judgment. And while confident God wanted all people to join Him for eternity in heaven, Jesus knew some might makes choices that left them out in the cold (or the very hot), weeping and gnashing their teeth. In this Jesus was very much the prophet, like Jeremiah challenging and dividing and being cast down into the miry pit for his troubles (Jer 38:4-10).

So, by the time Luke wrote his Gospel, the Church was experiencing dissension within and persecution without, just as Jesus had foreseen. Individual Christian hearts, families and communities experienced divisions and rivalries. Even with the best will in the world there will be different perspectives and opinions; with less-than-best will, there will be selfishness, unforgivingness, factions.

So Christ begins His lesson on peace with what seems its very opposite: with unease, subversion, a revolution of sorts. He challenges our neat little certainties, our comfortable self-delusions, our complacent self-indulgence. As C.S. Lewis said, “I didn’t go to religion to make me happy. I always knew a bottle of Port would do that. If you want a religion to make you feel really comfortable, I certainly don’t recommend Christianity.”[ii] Christ’s Gospel cuts us to the quick, praises our good-will and generosity, while pointing out how much more we could and should be doing. He turns not just our tables upside down but our values, purifying us by a baptism of fire, “fire within the heart”. So Christ’s is a very different kind of inner peace!

Then, through us, He brings peace to our external world, but that, too, is a very different kind of peace. This peace comes through struggles for justice, mercy and reconciliation, through all the ‘agro’ of identifying and articulating what hurts and helps, and our complicity in both. Only through this honest ferment, this “fire upon the earth”, can something new and better be built; only then can division open a way to conversion and renewal, reconciliation and peace.

Our Holy Father Dominic was a joyful friar who wept over lost souls. He was a tolerant friar who was horrified by heresy. He was a compassionate friar who insisted mercy was more than giving people whatever they wanted. He was an open-minded friar confident that there is an objective Truth to be known, treasured, transmitted and lived. Dominic wept at the thought that anyone might deny themselves these things and laughed at divine grace time and again conquering the Evil One and our broken natures.

Such fidelity amongst complexity comes at a cost. Our epistle today talks of a great cloud of witnesses – the Greek word is martyrs – on every side of us, urging us on in the race we have started (Heb 12:1-4). We naturally think of the Vietnamese Martyrs canonized by St John Paul II in 1988. Many of them were Dominicans – bishops, priests and lay tertiaries. We think of Ignatius Delgado OP, whose relic I have brought today, who laboured in Vietnam for nearly fifty years. At trial as Bishop of Tonkin he answered fearlessly about himself, while refusing to reveal anything about his companions. Though an old man of 76, he was then brutally tortured, displayed in a cage for public ridicule, and being left to die of exposure. We think also of Augustine Moi Van Nguyen, a labourer and catechist, and Dominic Dat Dinh, a military officer whom he converted, both Dominican tertiaries and both strangled when they refused to trample the cross. And there were so many more. You Vietnamese Dominican Laity of New South Wales are part of a very proud and noble line!

Now after 25 years your task is to share your Dominican passion for contemplating and transmitting the truth with a new generation, to tell them the stories of our Vietnamese martyrs and other sainted family members, and try to live in a way than honours them and joins us to them. With laughter and tears we contemplate the history of the Dominican laity in Vietnam and transplanted to this land, thank God for the many graces received, and entrust our fraternity to Him going forward. Ad multos annos!

Dear brothers and sisters, it’s a great joy for me to be here this morning to celebrate the Silver Jubilee of the Vietnamese Dominican Laity or ‘Tertiaries’ in New South Wales. We remember our leaders and members past and present and commend this fraternity to the paternal care of our Holy Father Dominic for the next 25 years.

I welcome concelebrating with me the Prior Provincial of the Dominican Province of the Assumption, Fr Anthony Walsh OP, newly returned from the General Chapter of the Order held in Vietnam; with him, the Prior of Sydney, Fr Dominic Murphy OP; the national Promoter of the Vietnamese Dominican Laity and my dear friend since our student days together, Fr Joseph Huu Truong Pham OP; the Pastor of St Brigid’s Marrickville, Fr Erick Niyiragira CP; the Senior Chaplain of the Vietnamese Catholic community in Sydney Fr Remy Lam Son Bui; and