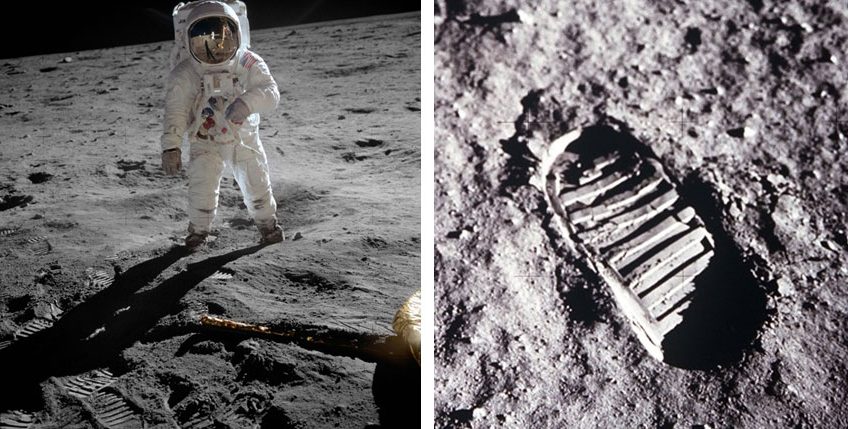 Fifty years ago yesterday, on July 20 1969, I was nine years old and along with my class of excited fourth-graders at St Michael’s Lane Cove – and 20% of the world’s population – I watched Neil Armstrong set foot on the moon, the first of twelve astronauts so far to do so. It was awe-inspiring. Many have commented on how it affected our understanding of the moon, the universe and our common home, the earth; on the meaning of the space-race, its place in the east-west propaganda war and arms race, the technological spin-offs, even the Aussie contribution to the tracking, comms and broadcast.

Some thought this “giant leap for mankind” would represent the beginning of a cosmic future for our species. For all our smallness and vulnerability, it demonstrated our imagination and intelligence, our hunger for exploration and the capacity of technologiy to overcome present limitations. Pope Paul VI, who insisted that Christianity is a friend to science, as to every genuinely human endeavour, exclaimed: “Honour, greetings and blessings to you, conquerors of the moon, pale lamp of our nights and our dreams. Bring to her with your living presence the voice of the Spirit, a hymn to God, our Creator and our Father.” Others were more sceptical, criticizing the lunacy of such risk to life, the astronomical expense, the hubris of Icarus. We were being hypnotized by money and technology, they said, while neglecting values and relationships. Shortly before his death the great author-theologian C.S. Lewis said he feared the astronauts would steal from us “the moon of the myths, the poets, the lovers”. ^

If so, it’s been a very gradual theft. Popular romance and drama films such as Ryan’s O’Neal and Madeline Kahn’s Paper Moon (1973), Cher and Nicholas Cage’s Moonstruck (1987), and Reese Witherspoon’s The Man in the Moon (1991) suggest the moon still has its symbolic power. Yet there is something in the thought that our culture has lost much of its sense of mystery these five decades past, relying upon science to provide the answers to our questions and technology to provide quick-fixes to our challenges. We now tend to focus on the visible, measurable and controllable rather than the less tangible, emotional or spiritual sides of life. On this Archdiocesan Marriage Sunday, for instance, we might consider how our pop culture has often reduced romance to sex, sex to mechanics, marriage to an over-the-top public ritual, family to an optional extra. Technologies such as computer dating and the social media have intruded even into the life of the heart, but rarely to good effect. Too often these promote a series of sexual experiments and romantic partners, plenty of “try before you buy”, but they leave people confused about the meaning of sexuality, marriage and family and ill-prepared to sustain long-term commitments. Until the space age, marriage and family were precisely where most people found much of their identity, formation, happiness, destiny; but since the sixties that’s all been up for grabs.

Our readings today are about hospitality – but they situate it firmly in the domestic context of marriage, family and household. In our first reading Abraham and Sarah at Mamre are longing for a child when they entertain three angels unawares – or are they the Blessed Trinity? – and are promised a son (Gen 18:1-10). In our Gospel three unmarried siblings, Lazarus, Martha and Mary of Bethany, also host God without realizing it (Lk 10:38-42). As so often in ordinary families there’s squabbling about the chores, perhaps occasioned by some fleeting jealousy or even some more long-standing resentment. Many of us, who consider ourselves people of action, ready to pitch in when help is needed, feel more than a bit of sympathy for Martha. After all, she’s doing her bit, making the party possible, while her co-host Mary seems to think she’s a guest and Lazarus, the typical male, doesn’t rate a mention!

Yet busy as we all are in this space age, don’t we all long for some time and place to ‘chill out’, to sit at the Lord’s feet, to stop and think about what it’s all about, who it’s all about, where it’s all heading? That’s surely why many of us come to Mass and make other times for prayer in our week: these occasions are havens in the world of noise, demands, devices, go-go-go, a time for self and God, such as Mary of Bethany recognized. Jesus often observed that important as clothes, food, wealth, power and planning are, if we make them our focal point we will have endless anxiety (Mt 6:31-4; Lk 9:57-62; 12:16-21 etc.); better to get our interior life right first, focusing on character, relationships, values, ‘the kingdom’. To say Mary’s is the better part is not to say that Martha’s isn’t a good one – it is – but Mary’s has a certain priority. Best of all, surely, would be the path of Jesus Himself, both contemplative and active, so that all the action is informed by a well-reasoned sense of purpose, and all contemplation a rest from and reflection upon all the busyness.

Our married couples present this morning – especially those who’ve been married since the moon landing fifty years ago – understand and model this for us. Being a well-balanced human being, an all-round Christian, and especially a successful spouse, requires a combination of the paths of Martha and Mary. It needs all the science of getting to know you, and all the mystery of accepting I’ll never grasp you completely. It demands all the activitiy to make a marriage, family, home, domestic church, a life together, but also the quiet alone with our thoughts and our God, the growing sense of who and for whom and why. Pursuing together both Martha’s path of serving and Mary’s path of listening, our jubilarians set us an example of a life that seeks first the kingdom of God so all else that is good can follow. From planet earth to those moonstruck lovers: thanks be to God for you!

NOTES FOR OF CONGRATULATIONS PRECEDING PRESENTATION OF CERTIFICATES

Welcome to St Mary’s Cathedral for the Solemn Mass of the 16th Sunday of Ordinary Time.

Today’s Mass is also the Archdiocese of Sydney’s Annual Marriage Mass. I am pleased to acknowledge all the couples renewing their vows today, particularly those married in this cathedral in years past, and those newlyweds married for a mere 50, 55, 60 or 65 years to whom I will be presenting certificates. It’s great to have you all here with your families and friends!

To everyone else present this morning, including visitors and more regulars, a very warm welcome!