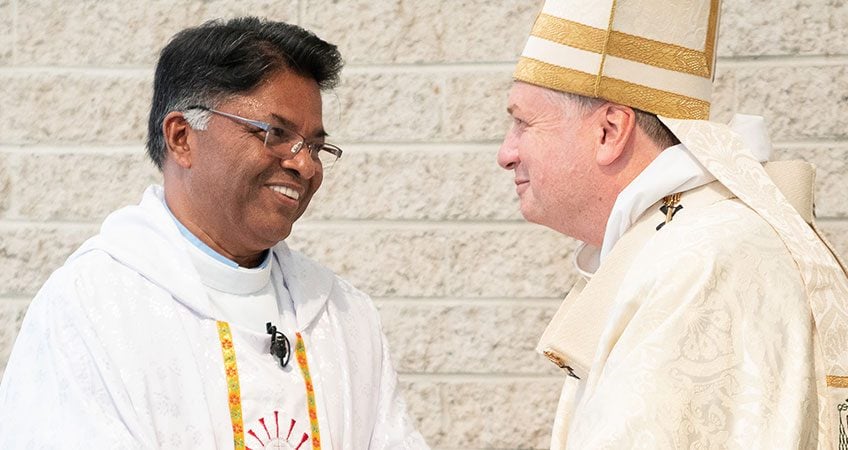 The 2001 film Behind Enemy Lines is described on the DVD cover as “an adrenaline-pumping action ride”. It tells the true-ish story of a U.S. Naval Pilot, Chris Burnett (played by Owen Wilson). During a routine reconnaissance mission during the Bosnian Genocide of 1995 he obtained photographic evidence of a Serb mass grave, only to be shot down over Serbian territory. After his co-pilot is captured and killed, Chris goes on the run for his life while politics back home prevent his rescue. Eventually French U.N. forces are sent to rescue him but, only moments before they land, they abort their mission and leave him stranded. We feel his anger, fear and despair, until {spoiler alert} U.S. Marines, acting against orders, come to the rescue under enemy fire.

What’s the difference between these two would-be rescuers? The U.N. forces are not callous or corrupt: they are just following orders, as soldiers are expected to do. The American forces are not immune to political influence: they are as much buffeted and constrained by Balkan politics and diplomacy as the U.N. forces. Only a child – and Hollywood – would think American forces were always braver or in the right…

The difference, of course, was one of relationship, specifically the difference between involvement and commitment. As the saying goes, when you eat bacon and eggs, the chicken is involved, but the pig is committed! The French U.N. forces don’t know Burnett; they’ve never met him, have no history with him, and so are involved in the mission to save him but not personally committed. The U.S. soldiers, by contrast, have a personal relationship with him, history with him, he is “one of them”; the relationship is real and committed, even if it has not always been amicable.

Something similar is going on in this morning’s Gospel (Jn 10:11-18). Jesus compares the hired hand who does a job but is not personally committed, with the Good Shepherd who knows and cares for his sheep. When danger comes, the mercenary flees the scene while the Good Shepherd risks his life for them. The sheep don’t ‘belong’ to the hireling or he to them; whereas the shepherd knows each sheep and they respond to his voice. While such a world is far removed from modern industrial sheep farming, it’s interesting that in the recent controversy over live sheep export from Australia, the popular outrage has not just been against the cruelty suffered by the animals but also against the apparent indifference of the industry. We expect better of shepherds!

Jesus explores the difference a relationship with Him makes in our Gospel passage today. His romanticizes sheep framing somewhat in order to highlight His intimacy with His disciples and His willingness to give His all for them. But He explains the basis of this kind of caring. Jesus loves because He has known love: “as [God] the Father knows me, so I know the Father: [that’s why I would]… lay down my life for the sheep”. Jesus gives freely in response: “No one takes my life from me: I lay it down of my own free will”. Jesus gives Himself to particular people: “the good shepherd lays down his life for his sheep”. And Jesus knows this is the path to more and better: “as the Father loves me for laying down my life, [so He enables me] to take it up again”.

Jesus’ teaching on how He relates to us also reveals how we might relate to Him. We hear His voice. We know His protection and care. We meet the Father through Him. He invites us to the same life of self-giving for others. Unless we’ve known love we won’t respond with love. If we think we love everyone, maybe we don’t really love anyone: a thousand Facebook friends doesn’t add up to one real friend. We have to commit to some relationships. But Jesus leaves us free. Like those U.S. marines in the movie, we might or might not respond to the call. Like the Good Shepherd’s sheep, we might wander far away. But he keeps calling us back…

So on Good Shepherd Sunday we install a new shepherd for Menai parish. Some years ago I asked a class of 5-year-olds why God became a baby at Christmas, and one budding theologian answered “so God could have a family”. The Holy Family of Jesus, Mary and Joseph to which your parish is dedicated has powerfully influenced our civilisation’s view of family as a community of life and love, entered into freely and lived faithfully. The parish is in turn a family of families, aspiring to be holy families.

It is to such a community that I now appoint Fr Mani. He is blessed to receive the care of a flock committed to building godly relationships: through liturgical and music ministries, prayer and Meditation groups; through RCIA and sacramental programmes; through the Catholic schools, state school catechists, youth group, adult faith education and bible study; through the care group, aged care, St. Vincent de Paul Conference and Social Justice group; through craft, family, Schoenstatt and other groups – you name it, Menai’s got it! The parish of Menai is fast growing with seven suburbs now, most of which didn’t even exist when I was growing up! You’ve got young families and youthful energy and people from almost every nation on earth. There are many causes to celebrate but not for complacency. We thank God for every Catholic of this district who is here on Sunday, but ache for the 15 out of 16 not at Mass on Sunday, and other sheep yet to know Christ’s voice or respond to it regularly. As He says in our Gospel today, He and we must reach out to them also.

I share some things in common with Fr Mani Malana. Like me he is a Christian disciple and a priest of Jesus Christ, an enthusiast for our faith and mission. As many of you know, 28 months ago I was struck down by Guillain-Barré Syndrome, an auto-immune disease that kills some people and totally paralysed me. I spent five months recuperating in hospital and many months recovering once back at work. It’s a very rare disease, but I heard from other bishops, priests and people who’d been through it, and come out the other end, which was encouraging. One of those was our Fr Mani, a Fransalian priest who came to Australia in 1998 to recuperate from the very same disease at his brother’s home. Since then he’s served in Mt Pritchard, Mascot, Hurstville, Liverpool, Fairfield and now Menai parishes.
Fr Mani will now be responsible on my behalf for the worship, evangelisation and service in this parish. In his priestly service, he must sanctify you by prayer and sacrament. In his shepherding, he must lead and serve as the Good Shepherd did. In his prophetic ministry, he must proclaim the Gospel and Church teaching in season and out. But he cannot do this all by himself. Together, priests and people achieve far more than any one of us could do alone. To strengthen Fr Mani for this task, we now have the formal Rite of Installation of a Parish Priest. It’s a useful reminder to us all not just of his mission but yours. I ask you, of your mercy, to keep supporting Fr Mani, as he prays for and serves you.

Welcome dear parishioners to this morning’s Mass of Good shepherd Sunday, where I will formally install Fr Mani Malana as your parish priest. I welcome his family: Fr Mani’s brother, Cyriac, with wife Suba and sons Kevin and Davis; and Fr Mani’s sister, Regi with husband Jaison, son Alenso and daughter Teresa.

Concelebrating with me today are the Assistant Parish Priest, Fr Daniele Russo, and Discalced Carmelite fathers Sunny and John.

I acknowledge the presence of Mr James Corcoran, Principal of Aquinas College, and Ms Karen Richards, Principal of Holy Family Primary School. Last week the people of this district faced fearsome bush fires and some had to be evacuated, including Debbie from my own staff. Thankfully no lives or houses were lost and we give thanks to god for that today, as we do for those firefighters and volunteers who assisted.

The Rite of Installation of a Parish Priest offers us all a chance to reflect on the various stages of our faith journey. So we begin this Mass by giving thanks for the gift of our Easter faith and repenting of our failures to live it as we ought.