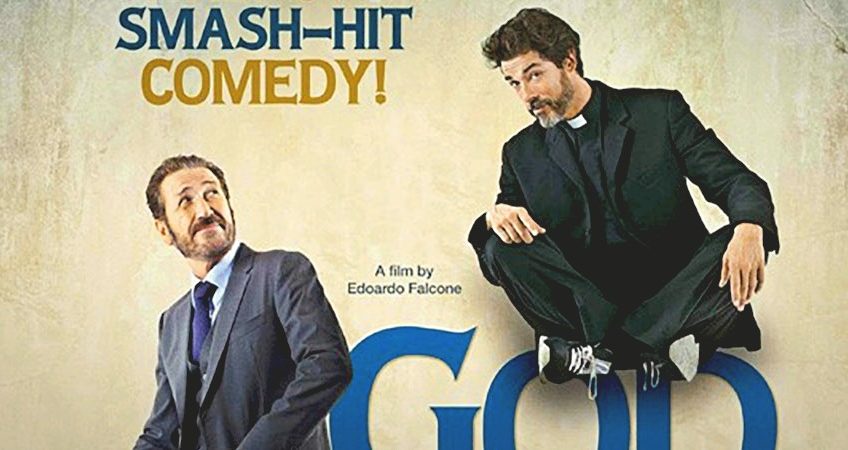 
HOMILY FOR MASS CELEBRATING THE END OF THE YEAR OF YOUTH AND ANNIVERSARY OF ACYF 2017
Feast of St. Ambrose, St. Mary’s Cathedral Basilica

One of the best Italian comedies of recent years was Edoardo Falcone’s Se Dio vuole – God Willing (2015), which tells the story of the battle of wills between an atheist with a God complex and a hip local priest. An esteemed and defiantly self-confident cardiac surgeon, Tommaso, finds his university student son, Andrea, behaving strangely: rather than dating girls, he’s been going to some mysterious destination in the evenings. When the young man says he has an announcement to make to the family, they all presume he is about to ‘come out’ to them as homosexual – to which they were all ready to say “whatever makes you happy”. But Andrea instead announces something which, from Tommaso’s point of view, is appalling: that he’s giving up medical school and joining the seminary! It turns out that those late night meetings were talks at a local church given by the charismatic Father Pietro, and that Andrea had been inspired to give his life to God and his people as a priest himself.

Tommaso refuses to accept his son’s vocation and decides to ‘go undercover’ to expose Don Pietro as a fraud so his son would be freed from his influence. But all the family members are provoked by Andrea’s announcement to look again at the question of faith and find God in their own way. Amidst all the laughs, the film contains a serious subtext about how we find ourselves, sometimes through personal introspection, but at other times by some external shock to our system.

The phrase ‘God willing’ appears at many places in the Bible, and is a the subtext of our epistle today (Eph 3:8-12): try as we might to plan out our lives, St. Paul insists, there’s a bigger plan. That’s God’s plan, ‘which he had from all eternity in Christ Jesus Our Lord.’ It’s vanity to imagine we can control the future; we reason and discern as best we can, plan prudently, commit ourselves, and throw our energy into seeing through our commitments, all the while saying ‘God willing’. Even Jesus, when He prayed to His Father-God, added at the end of His petitions “But your will, not mine, be done”. Or as He taught us to say in the Our Father, before we pray for our daily needs, for forgiveness, for protection, for God’s reign, we should pray “thy will be done”. Catholics used to add to many a hope or prediction, Deo volente. And Arabs, Christian or Muslim, still often say: Insha’Allah, God willing!

But what is it that God wills and how would we know? Sometimes I think people over-complicate things when they talk about discernment. You give the impression that it’s really hard to know what God wants of us; that He’s almost playing with us, hiding His will from us, and it requires special trials and incantations to discover His will; that He sometimes gives people a glimpse but then it’s almost impossible to fulfil… Well, whatever anxiety disorder lies behind that picture of vocational discernment, it’s NOT the Christian God. Our God wants us – wants you – to succeed, and so He gives us intelligence, emotions and free will to embrace His plan. Rather than being a treasure map available only to Indiana Jones or the Pirates of the Caribbean but not to us ordinary mortals, and near-impossible to interpret, our big-V vocation and small-C choices really are discernible and doable.

The first thing is to know about God’s plan is that He loves us from all eternity and our word ‘Providence’ is a profession of faith its His intimate involvement in everything from the creation of the cosmos to the individual hairs on our heads. Vocation is our name for our personal story and how it fits into God’s bigger story of ‘Salvation history’. Like young Andrea in our film, God Willing, our part really matters to God and the world; were Andrea’s character struck out of the film script, it wouldn’t be the same film, indeed it wouldn’t work as a satisfying story. All we have to do is take reliable advice, think, pray, discern, about how our story would be the best story, and how it would best fit into God’s story. As you guys think through where it’s best to invest yourselves, don’t be like the hired hand in our Gospel, who’s there but not really invested in what he’s doing (Jn 10:11-16): no, throw yourself wholeheartedly into writing your character and your chapter of the Gospel; stretch yourself beyond the immediate horizons of your own convenience and limitations to be the best you that you can be – under God’s grace!

Which brings me to St Ambrose, whose feast the Church celebrates today. He was a prominent Roman of the fourth century, studious and a natural leader like many of you. He rose to being Governor of Northern Italy and was considering becoming a Christian. There was a dispute about the election of the new Bishop of Milan, so he went along to keep the peace. All of a sudden someone – probably a school kid – cried out “Ambrose for Bishop” and soon the whole assembly, like a crowd at a football match, were chanting the same – even though he wasn’t a Christian yet. Accepting that this was God’s will for him, Ambrose courageously gave away his position and his considerable wealth, and got himself baptised, confirmed and communicated, ordained a deacon, priest and bishop, all in a week! He went on to be one of the most successful leaders in the history of the Church. Who knows how many potential Ambroses and Ambrosias there are here today – natural leaders and servants of our Church and community for the century ahead!

Don’t be afraid to be great, my young friends. God has a plan for you and, God willing, you will do great things. Jesus, the Good Shepherd, already has an intimate, personal relationship with you, however strong or weak it feels from your end right now. He knows you by name. He knows your innermost thoughts and desires, and wants only the best for you. To give yourself to His friendship and His plan is to lose nothing and gain everything!

Of course, friendships take their time to evolve and plans to unfold. The ACYF was only three days long, the YoY only a year, your time in a Catholic school only six or twelve years. You’ll have to keep working at the relationship in the years ahead. It might be easy to say today, surrounded by 800 of your peers,  ‘Yes! God, I am willing’, but harder tomorrow, when you feel more alone. Please know that Christ and His Church are there for you always. Open your eyes to horizons beyond and have great confidence that, if only you will co-operate, God will lead you, by a wonderful if mysterious route, to a fulfilled life and eternity with Him. God willing? Yes, God is willing!

WORD OF THANKS AT THE END OF THE MASS CELEBRATING THE END OF THE YEAR OF YOUTH  AND ANNIVERSARY OF ACYF 2017
Feast of St. Ambrose, St. Mary’s Cathedral Basilica

My thanks to all those who contributed to our beautiful celebration today. On behalf of you all and of the entire Archdiocese of Sydney and Church in Australia I also want to thank all those who made the ACYF and Year of Youth possible: the ACBC youth office; the ACYF festival led by Kathy, Phillippe, Anthony, and helpers; Bishop Umbers and the Steering Committee, sub-committees and staff; the Catholic Schools offices of Sydney, Parramatta, Broken Bay and Wollongong; the Bishops, pastors and performers; all the events professionals and volunteers, including the army of teachers and staff from our school system here in Sydney; and, of course, the participants: you did a great thing! Likewise, all those who organised and participated in the many SCS and SCY events during the YoY.

At our Mass at the end of the ACYF last year and the beginning of the Year of Youth, I called upon you all to be attentive to the voice of Jesus in your life and identify ways of spreading the joy you have found with Him. I said that you should not be afraid: for the Church, and God Himself, is always here for you! I then consecrated you, the young people of Australia, to Christ and His Blessed Mother. Today I invite all to kneel as you did then, so as to renew that consecration:

and with confidence that the love of Jesus Christ abides with us through the Holy Spirit,

we offer and consecrate the Catholic youth of Australia to You,

and to Blessed Mary, Help of Christians and Our Lady of the Southern Cross,

you will make of them the priests and prophets, the leaders and servants, the saints and heroes we need for our times.

INTRODUCTION TO MASS CELEBRATING THE END OF THE YEAR OF YOUTH AND ANNIVERSARY OF ACYF 2017
Feast of St. Ambrose, St. Mary’s Cathedral Basilica

Welcome to your Cathedral of St Mary. It’s always a joy to join young people on fire with faith! This morning we recall the first anniversary of the Australian Catholic Youth Festival here in Sydney. What an extraordinary three days we had together! Days for broadening our horizons; for encountering joy in Jesus Christ; for discerning how we are going to spread that joy going forward! 19,000 young people, including many of you, participated in prayer and worship of many kinds. You sung and danced and praised God. You heard from some really switched-on lay evangelists and musicians. You conversed with artists, sportspeople, journos, nuns and pastors. You discussed topics ranging from sexuality to rural life, mental health to disability, drugs to the digital world, faith and reason, love and leadership, spirituality and discernment. You had practical experiences of helping the poor, homeless and refugees, promoting fair trade and sound ecology, and campaigning against evils like modern slavery. You spoke your minds in X-Changes with Bishops, were heard respectfully and contributed your ideas for the future direction of the Church. You prayed lots, learnt lots, had a great time with your friends, enjoyed being Catholic in public, and grew closer to Christ.

The ACYF launched Australia’s Year of Youth which comes to its close for us in Sydney today. This was a year for the whole Church in Australia to hear, reflect with and draw inspiration from our young people, to renew our service to them, and to draw them ever more closely into the life and outreach of the Church. Lots has happened here in Sydney during that year, including the following activities by SCS: incredible participation, by over 9,000 staff and students in the ACYF; the Primary Schools Youth Festival; the YoY teams and project grants for secondary schools; YoY Connect and Engagement Forums to ensure the voice of our young people was heard; new opportunities for prayer, evangelization, social justice and listening to our young people, including ‘Life Night’ at Milperra on Human Trafficking and Anti-Slavery, EastFest at Pagewood and Waverley, and Evangelisation Days starring Jason Evertt, Steve Angrisano and others; several mission-immersion and pilgrimage experiences; and many more local events in our schools…

To mark this great year, it’s great to have you all here, my dear young friends. I welcome you back with all my heart!