A very warm welcome to St Mary’s Cathedral for this year’s Red Mass marking the opening of the new law term. Though I have been honoured to preach at Red Masses in the past, this is my first as Archbishop. I sometimes say we all have shameful things in our past and that one of mine was that I was a lawyer – before I entered the priesthood. In fact I loved the law and today I honour and pray for all those who practice it.

I acknowledge concelebrating clergy: His Excellency Bishop Antoine Tarabay of the Maronite Diocese; Fr Brian Lucas, General Secretary of the Australian Catholic Bishops Conference (another reformed lawyer); Fr Paul Hilder, Dean of St Mary’s Cathedral; Fr Mark Podesta, Director of the Catholic Church’s Tribunal in Sydney; and Fr Peter Joseph, chaplain to the St Thomas More Society. I thank all the members of that Society for assisting in organising this occasion.

Amongst our our civic leaders I acknowledge:

From our courts of law, I welcome: 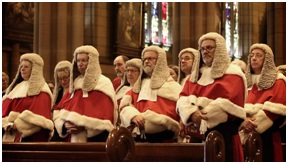 Just before Christmas, only a few hundred metres from this cathedral and even closer to our legal precinct, a man who styled himself ‘Sheik’ Man Haron Monis held a café full of staff and customers hostage for hours, terrorizing them and our city, until it ended with three dead. One was a member of the legal profession, Katrina Dawson, a mother of three young children and gifted member of the bar. The response was immediate and dramatic: our city grieved as perhaps never before, over the loss of lives and of innocence, as Martin Place became a sea of flowers and angst, and as people wondered how peaceful democracies can respond to the terror now enveloping some cities and nations. Some proposed the effective suspension of law and imposition of order; others counselled a lowering of anxieties and retribution. Ultimately our community responded by pulling together and not allowing that any ethnic or religious group be held responsible for one madman’s actions. Ultimately we insisted on both order and law and on a bigger picture of the common good. 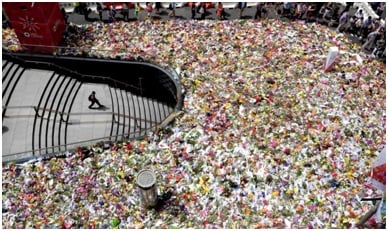 It will take time fully to comprehend the significance of the Lindt Café Siege and community reaction. For law-makers and practitioners it raised important questions about the right balance between liberty and security, about responsibility for and responses to acts of terror, about the very purpose and sources of law, and about the sometimes rival claims of justice, mercy and popular opinion. The centuries-old tradition of invoking the Divine Assistance at the beginning of each Law Year is testament to the seriousness with which the profession takes such matters. Like King Solomon in our reading, we seek wisdom and discernment for our lawgivers, for theirs are heavy responsibilities (1Kings 3:3-14). We ask the God who holds our universe in being and orders it wisely to allow mere mortals – free and rational, but sometimes confined and irrational – to participate in His higher law.

However humdrum and imperfect might be much of day-to-day secular law, it aspires, whether consciously or not, to reflect that higher order. In the seventh century before Christ the Greek poet Hesiod wrote: “This was the rule for men that Zeus established: whereas fish, beasts and birds eat each other, since there is no law among them, to men he gave law, which is by far the best thing” (Peter Jones in Spectator 17 January 2015, 14). Law, on this ancient view, is more than limiting harm by approving some and punishing other uses of force, more than keeping the wheels of commerce turning by maximising the freedom to do things in concert or alone. That ‘more’ that makes law ‘by far the best thing’ is the distinctively human aspiration to reverence each other and enable each other’s flourishing. In the Judeo-Christian tradition it begins with the idea that every person – even someone different from me in ethnicity, beliefs, experience and friends – is a child of God with an intrinsic dignity worthy of my respect and my community’s protection. I count it a blessing that our country is heir to such values and has a rule of law based upon them.

Some of you may know that I am a Dominican friar. 800 years ago St Dominic was inventing his ‘friars preachers’ around the same time that St Francis was inventing the ‘friars minor’. About all most people know about friars is Friar Tuck of the Robin Hood legend – fat and jolly and not much enamoured with authorities, whether secular or ecclesiastic. The background to this band of merry men who played fast and loose with the law was, of course, the tyranny of Bad King John. And so this year marks another 800th anniversary – that of Magna Carta. By signing it King John hoped to buy peace with his rebellious barons and the barons hoped to limit state power with strong provisions against arbitrary imprisonment, fines and the like. It is, in fact, a very religious document. Its self-described purpose is to honour God, exalt holy Church and better order the Kingdom. In it King John acknowledges that he rules under God and that the rights and responsibilities recognized in the Charter are God-given rather than his inventions; to fail to recognize them would, the Charter claims, imperil the king’s soul.

The first right recognised in the Magna Carta was religious liberty; the ecclesia Anglicana was to be free to order her affairs and enjoy her liberties ‘unimpaired’. We are heirs to the idea that people should be free to believe what they will religiously, and given a wide latitude to worship and live according to their conscientious beliefs; this is not a case of making exceptions for benighted eccentrics, but a recognition of something essential to the flourishing of individuals and enriching for the community. At a time when even children are being beheaded for their beliefs in Syria and Iraq, when churches (sometimes with their entire congregations inside) are daily burned in Niger or Pakistan, when totalitarian secularists in some countries would exclude religious voices from public life and religious providers from community service, we cannot presume everyone respects religious liberty.

Good laws, systems and practices don’t happen in a vacuum: they depend upon a complex of ideals and practices, traditions and institutions. In this jurisdiction it is largely the Judeo-Christian inheritance upon which we draw, however under-appreciated that often is. In the face of international and domestic tensions, we must renew that social and spiritual capital, and that is a task for both Church and state, for high-minded jurists and down-to-earth citizens.

This year’s Red Mass falls on the Feast of Candlemas. The Church commemorates Joseph and Mary presenting their firstborn in the Temple – not as a matter of private devotion but, as Luke records, “in fulfilment of the Law” (Lk 2:7, 22-40). Clearly, then, they were law-abiding people, even if Jesus’ challenge to be more just, merciful and virtuous than the Law strictly requires seemed subversive to some. Zacchaeus, in our Gospel story, responded with that ‘more’, offering in excess of legal restitution (Lk 19:1-10). St Paul, too, in our epistle, hopes to be judged by a merciful God – one who does not treat us as we truly deserve – and advises his charges to be similarly generous (Eph 6:1-17). So law points beyond itself to something greater: to a kind of harmony between people only glimpsed intermittently in this life. I pray that by your efforts in this new year we might catch sight of that higher justice a little more often and come a little closer to fulfilling the high aspirations underpinning our legal system. God bless the Law Term of 2015!