Mass for First Sunday of Lent, Year B

Today is the first Sunday of Lent, our annual season of renewal, where we join Noah for his forty days in the wet and Christ for his forty days in the dry, contending with temptation through fasting and prayer, and demonstrating our victory – Christ’s victory in us – through our acts of charity. The Church exhorts us at least annually (in this Paschal time) to make Confession, especially of all our serious sins, and at least weekly (at the beginning of Mass) of the less grave ones. And so we confess…

Periodically, something revives debates about Noah’s Ark and the Flood. There are regular sightings of the ark in Armenia, Kurdistan or elsewhere and the expeditionaries are affectionately called ark-eologists. The Discovery Channel every so often solves the mystery for us and recently, of course, there’s been a major movie. But more interesting was the discovery last year by an assistant curator at the British Museum of a small, light brown tablet, about the size of a smartphone but 4,000 years old. He deciphered the ancient Mesopotamian writing and found instructions on how to survive a flood, by building a boat big enough for your family and for boarding the animals “two by two”. It recommends a ’round’ ark, about two-thirds of the size of a football field, made of wood, rope and bitumen. 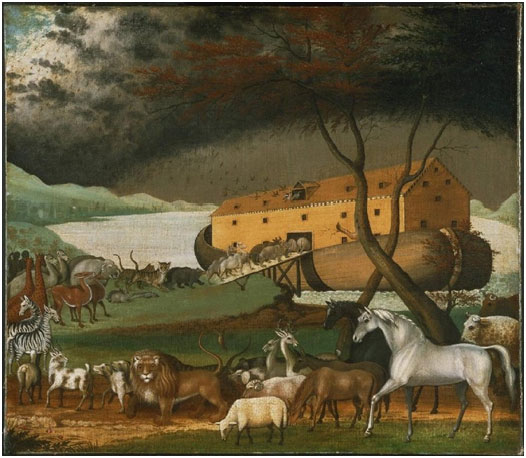 http://upload.wikimedia.org/wikipedia/commons/2/23/Noahs_Ark.jpg
From the Gilgamesh Epic to this Mesopotamian tablet via the Bible, many cultures preserve a memory of a deluge and humanity emerging from the watery deeps. Our book of origins, Genesis, reports how God saved Noah from the flood by instructing him to build an Ark of gopher wood smeared with pitch, with three decks and internal compartments, 137m long, 23m wide and 13m high, with a pitched roof and entrance on the side through which Noah’s family and the animals were to enter and keep safe through the looming forty days of rain (Gen 6:15).

St Augustine explains that this story is both historical and more-than-historical, which is why they can still speak to ‘enlightened’, scientific-minded people in twenty-first century Sydney. The community on Noah’s Ark, he says, is the Church “on pilgrimage in this world”, an image taken up by the Second Vatican Council. Its members are saved by wood – not a boat but a cross on which our Lenten Lord hangs. The door of the ark is the hole in Christ’s side made by a soldier’s spear as He died upon the cross. When that door was opened, water and blood flowed out (Jn 19:35), the sacraments of Baptism and the Eucharist through which Christians are initiated and a new humanity grows.  Through forty days and nights of rain (Gen 7:12, 24; 8:3) – the first Lent – Noah and companions were kept safe, as the ark of the Church secures us today against the floods and storms of life.

In our first reading we heard that after that Great Flood God established a new relationship with mankind (Gen 9:8-15). Noah and his descendants are offered a covenant promising that God would protect and nurture them, a covenant sealed with a rainbow. But as the flood foreshadows Holy Baptism, so this covenant presages another that would come through the saving death of Christ (e.g. Lk 22:20). After forty days in the desert of human existence, amidst barrenness and temptations, contending not just with the elements but with Satan himself (Mk 1:12-15), Jesus emerges on the public stage ready for his public ministry, for proclamation of the Good News and healing of the Bad News, for Lenten death and Easter resurrection. It is once and for all: his new covenant would be a perpetual one, reconciling humanity to God, sealed in the blood and water of the Lamb, and of His sacraments, offered on the ark of the altar and the altar of the Cross.

This new covenant-relationship is for keeps, yet it is not compulsory. It is offered, again and again, but we are free to respond or not. “Repent and believe!” Christ cries out in the Galilee of our hearts. Turn away from the Bad News of your sins and towards the Good News of your salvation. Resolve to do better: to sin no more. Our epistle today – the first papal encyclical – shows that from the beginning Christians interpreted Noah’s story as being their own, the story of their Baptism, their being saved in and from the water, saved from sin and for something better (1Pet 3:18-22). But as St Peter observes, some refused to believe and be saved at the time of the Flood and ever since people have been free to embrace the life of water and blood, of the Church and her sacraments, or not.

Lent and Easter call to us again. Elect of God: come forward for Baptism, Confirmation and First Holy Communion. Those already initiated: come forward to renew your baptismal promises. Renounce sin and Satan; embrace Christ and His Lenten path to Easter glory! But first there is that Lenten path. On Wednesday last the ashes on our foreheads told of our mortality and our glimpse at immortality, of our contrition for our sins and our trust in God’s mercy. Now we join Noah and the boys. Now we join Christ in the desert. We have forty days and nights in which to put away our old selves and ready ourselves for Easter. Extra prayer, extra penance, extra charity: these are our weapons with which to confront the reality of sin in our world and in our own lives and to join Christ in contending with the Dominations and Powers. 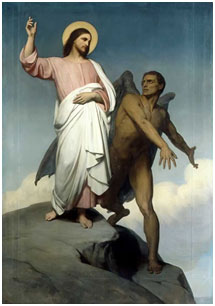 http://upload.wikimedia.org/wikipedia/commons/f/fa/Ary_Scheffer_-_The_Temptation_of_Christ_(1854).jpg
This week it was reported 21 Coptic Christians were beheaded in Libya by Islamist affiliates of ISIS who have declared their ultimate goal is the conquest of Rome.  Like the burning alive of a caged Jordanian soldier a few weeks ago, this atrocity brought horror and swift retaliation. The endless cycle of violence and recrimination continues in our world, in our own hearts. This Lent, let us commit to a profound conversion of heart through our practices of prayer, penance and almsgiving. Let us ask Christ crucified to purge all evil from our hearts and ready them to become braziers in which the Easter fires of faith, hope and love may be lit forty days hence. And so I pray once more the first prayer of Lent: “Grant, O Lord, that we may begin with holy fasting [our] campaign of Christian service, so that, as we take up the battle against spiritual evils, we may be armed with weapons of self-restraint.”