Homily for Mass for Feast of St Ignatius of Loyola 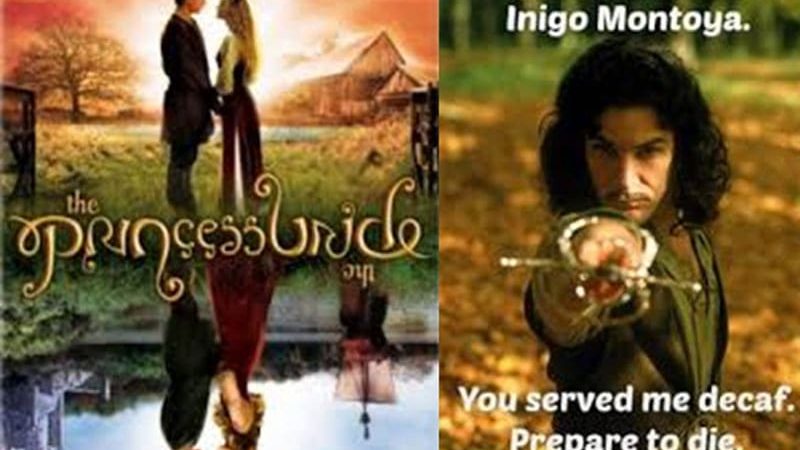 The Princess Bride is a 1987 American fantasy adventure film which has become something of a ‘cult classic’. It is commonly rated amongst the top 100 comedy films of all time and has charmed audiences ever since. It is structured around a grandfather (played by Peter Falk a.k.a. Columbo) reading a book to his sick grandson. He tells the story of a farmer’s daughter named Buttercup (Robin Wright from The Girl with the Dragon Tattoo). Whenever she gives an order to one of the hired farm-boys, Westley, he answers “as you wish” and happily complies. Eventually, she realizes that by “as you wish” he means “I love you” — and that she loves him too. Westley (played by Cary Elwes later of the Saw series) goes off to seek his fortune so they can marry, but his ship is attacked by the dread Pirate Roberts, and he is presumed dead.

Years later Buttercup agrees to marry the unappealing Prince Humperdinck who really plans to have her kidnapped and murdered as a pretext for war. Two separate forces pursue the supposed terrorists: the Prince and his retinue, and a masked man dressed in black who turns out to be our hero, Westley, who has somehow miraculously escaped death. He catches the criminals first and converts them to being his companions. He is reunited with his beloved, and the duo manage to cross a swamp full of fire spouts, lightning sand, and Rodents of Unusual Size, only to be captured by Humperdinck and his sadistic vizier, the six-fingered Count Rugen. The prince has Westley imprisoned in the Pit of Despair and tortured to death. But Westley, it turns out, is only “mostly dead” and escapes again, rescues his beloved and they live happily ever after.

Today we remember another Spaniard named Inigo – Íñigo Loyola – upon whom our hero’s friend Inigo Montoya was loosely modelled. He, too, had a taste for swashbuckling adventure, even violent revenge, but found his whole life turned around by an encounter with God’s mercy. Íñigo Loyola is of course better known as St Ignatius. He was born in the Basque country of Spain, a few kilometres from my own Basque ancestors. As a young man he was a page in the royal court and took to its life of wine, women and song, gambling, fashion and brawling. He became a soldier but was seriously injured in the leg. During an extended recuperation he thought he’d read novels about knights in shining armour pursuing fair damsels, but the only books available were about the life of Christ and His saints.

And so he encountered his Westley, his version of the merciful lord who miraculously escaped death and saved others. Converting to being a disciple of Christ, he continued his romantic adventure by going on pilgrimage to the Holy Land, confessing his sins, wearing the clothes of a pauper, and spending ten months in a cave praying. When he got back he went to uni and he and his mates decided it would be cool to take religious vows as companions of Jesus or ‘Jesuits’. They travelled to Rome to offer their services to the Holy Father: hence the famous ‘fourth vow’ of the Jesuits of obedience to the Pope. This adventurous spirit and fidelity to the Church inspired them to leave home, position and possessions and travel the globe in obedience to Jesus’ sayings in today’s Gospel (Lk 14:25-33). Wherever they went the Jesuits offered Catholic teaching, retreats and spiritual direction. Many were martyred, as befitted the desire of these soldiers for Christ to do everything ad maiorem Dei gloriam, to the greater glory of God, just as St Paul put it in our epistle (1Cor 10:31-11:1). By the time he died on 31 July 1556, Ignatius’ Jesuits were well on the way to becoming the biggest and most influential order of priests in the world.

My young friends: you are privileged to be receiving an education inspired by that great man. The ancient adage and your school’s motto Ad Majora Natus – ‘born for greater things’ – could have been the motto of Inigo Montoya and Íñigo Loyola. Those who follow it are men of ideals and application. The ‘greater things’ are not the wealth and power of Prince Humperdinck or the counts of Loyola, but ideals such as companionship, faith, mercy, service. These are the greater things that the Church and this college hope you will take forward into your adult lives along wit hthe knowledge and skills and friendships you have gained here at school.

Our culture often says that young people aren’t up to much, are no longer as idealistic as they used to be, no longer have the courage or self-discipline to pursue a high goal, but are only interested in themselves, in getting ahead, in fleeting experiences of pleasure and accumulating gadgets and other possessions. Our culture runs young people down in so many ways, sells them short. But as your motto reminds you, you are called to more and better, in fact, you are born to it. Ignatius of Loyola tried it all and in the end found the high life wasn’t all it was cracked up to be. It didn’t satisfy him deep down. He knew he was made for more, for greater things. So, too, Pope Francis, says in his brand new encyclical on the environment, Laudato Si, that our gadget culture peddles technology and consumer goods as the way to happiness; but any culture that leaves God and His mercy out of the picture impoverishes the human spirit, abandons the poor and ends up eating up and then excreting the world.

Like Inigo Montoya and Íñigo Loyola did, I pray that you will discover that the greatest adventure in life is not the vain pursuit of fame and fortune, but the sane pursuit of love and truth. Your Jesuit school education should jumpstart you into that epic adventure, sometimes comic, sometimes heroic, that is life in Christ, Catholic life, and set you up for such a life in your future studies, work and leisure, friendships, marriage and family, and the rest…

Pope Francis has announced that the coming year will be an Extraordinary Jubilee of Mercy. In his conversion from a life of earthly distractions, even violence, St Ignatius experienced God’s mercy. He faced up to the reality of who he’d been till then, confessed his sins, and asked God’s help to turn his life around. In Laudato Si his Jesuit son, Pope Francis, says we are only going to turn around the problems of disadvantage and environmental degradation in our world if we are turned around ourselves.

So let’s try this ourselves. Let’s try to face up to yourself, in the spiritual mirror that is Confession, and receive that great sacrament of mercy. Let’s spend more time in the society of Jesus, in company with Christ and His saints, by regular Mass and prayer before the Blessed Sacrament. Let’s spend less of our time and resources on ourselves and more on your neighbour. Let’s practice simplicity, humility, a less greedy, more ascetical lifestyle. Having received mercy yourself, be merciful to others. Become agents of divine mercy, mercy men! And get ready for the adventure of a lifetime!

Welcome all to this Mass to mark the feast of St Ignatius of Loyola, founder of that Society of Jesus to which we all owe such a debt of gratitude. It has given the Church and the world great saints, missionaries and martyrs, and now a great pope; it has established and staffed educational institutions all over the world; and so it has contributed to the spiritual life and education of the likes of you boys here at St Aloysius College and your brothers from St Ignatius Riverview such as myself.

Today I am pleased to acknowledge concelebrating clergy including my long-time friend and your Rector, Fr Peter Hosking SJ, with Fr David Braithwaite SJ; another long-time colleague of mine, now your Principal, Mr Mark Tannock; Mr Jock Murray, Chair of the College Council along with the College executive, staff and prefects-elect. I especially welcome all students in Years 8 to 12 here at St Aloysius.

Today in Brisbane the priest who was Headmaster when I was first at Riverview and a former Headmaster of this school, Fr Greg Jordan SJ, will be buried. I ask that in you remember him your prayers today: eternal rest grant unto him, O Lord, and let perpetual light shine upon: may he rest in peace. Amen.