Homily for Feast of St Dominic 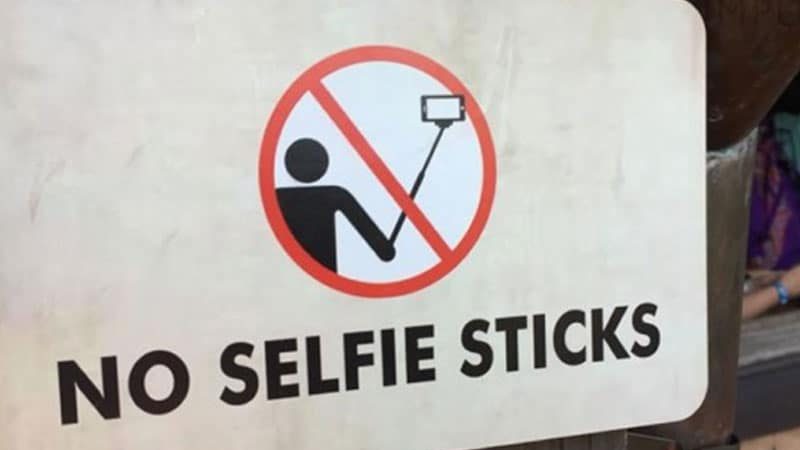 Recently, Disneyland in California, Florida, Paris and Hong Kong banned selfie-sticks. Not because they were troubled with the self-absorption of those who wish to take photos of themselves: selfies will still be allowed. But the Disneylands regard the long sticks as an OHS hazard: sticks that might protrude from their rides and interfere with the mechanisms, or might poke people in the eye or other parts, are no longer permitted. ‘The wand of Narcissis’, as it was once dubbed, was the most popular Christmas gift over the past two Christmases, but it is now finding itself banned in places like the Sistine Chapel in Rome, the Palace Museum in Beijing and the entire country of South Korea –and not just for occupational health and safety reasons. When the annual Coachella musical festival in California banned the wand they declared that their rule is “No Selfie Sticks, No Narcissists”.

There is something to the ban. It has been reported that something like 93 million selfies are taken each day,[1] that a huge proportion of these are then digitally enhanced before being posted,[2] and indeed that many users retouch every single selfie that they post. As for the country that loves selfies the most? Australia. Research suggests that those Australians who publish selfies of themselves on social media are more likely to have a “dark triad” of personality characteristics: to be narcissistic (i.e. extremely self-centred), Machiavellian (i.e. manipulative of others) and psychopathological (i.e. unconcerned about the effects of their actions on others). A person is more likely to have narcissistic traits the more often they change their profile picture, the more often they post selfies on Facebook or Instagram, and the more they edit photos that are posted on social media.[3]

Perhaps this should not surprise us. Pride has been a constant in the cosmos since Satan declared non serviam and humanity decided to play God (Gen ch 3). That wisest of all observers of humanity, Jesus Christ, once memorably recommended that we learn to serve rather than be served and remove the log from our own proud eyes before trying to extract the specks from our neighbours (Mt 7:5; 20:28; 23:11 etc.). Pride disfigures our souls and worldviews, making us incapable of judging our true worth before God and neighbour. Technologies can feed this in us as they invite us to post ourselves to the world and share our latest burps. Many studies have suggested narcissism is on the rise today. Newborn babies are given unique names or spellings of their names so they and everyone else will know how special they are. Indulged in every way thereafter, these ‘little emperors’ are given endless awards just for breathing and all correction or criticism avoided. From early adulthood come further encouragements to inordinate self-esteem and even self-obsession: the celebrity culture, easy credit, fashion, plastic surgery, social media… Endless tweeting is required because every movement is presumed newsworthy.

Pope Francis, in his new encyclical Laudato Si: On Care for Our Common Home, suggests that humility and sobriety are insufficiently valued in modernity. Without these virtues limiting our self-valuation we can assume limitless self-importance and a “limitless mastery over everything”. The result will be the endless assertion of will by the powerful, the neglect of the ‘little people’, and the damaging exploitation of the natural and social environments. Humility and sobriety will be hard for those whose first and trump-all value is autonomy, a self-assertion that marginalizes others, even God, and makes ego king and personal preferences or feelings into morality (224).

In this Year of Consecrated Life and as we approach 800 years since he founded his Order of Preachers, the example of St Dominic is as important as it is countercultural. Dominic lived St John the Baptist’s motto “I must decrease that the Christ might increase” (Jn 3:30) and St Paul’s that “It is no longer I who live, but Christ who lives in me” (Gal 2:20); Christ only do I preach, in season and out (2Tim 4:1-8). It was said of St Dominic that he spoke “only of God or to God”: I remember someone saying once that that would have been rather boring. But I wonder if it could have been more boring than those who tell their social media friends what they had for breakfast. While still a young canon at Osma, he shone “as a bright ray of sunshine, in humbleness of heart the least, in holiness the first”. When he set out with his bishop to see the world, Dominic was appalled by the catechetical, spiritual and moral impoverishment of many of the people he encountered. But instead of whinging “Why doesn’t the Pope do something about this? Why don’t the bishops?” he set about doing something himself. His passion was his mission, his mission was his order, and his order was not his pet project but of and for Christ and His Church. If a star shone above him, it was not his own light but the light of Christ and it spot-lit not Dominic himself but his preaching of the crucified Christ (cf. Mt 5:13-16).

It is a very surprizing thing that not a single homily survives of the founder of the great Order of Preachers; no theological tract, of this father of theologian-teachers; no great contemporary hagiography of this immediately recognized saint. Maybe none of his sermons and talks was thought worthy of preserving; maybe he wouldn’t allow them to be reduced to pages and saved; certainly he and his followers remained coy about the details of his life story or about any cult following. Ask your average Catholic punter where his contemporary, St Francis, is buried and they may well know; ask even well-informed Catholics where St Dominic is buried and they’ll probably have no idea. Dominic suggested they just lay him in the ground wherever he dropped, preferably under his brethren’s feet in choir and wanted no grand sepulchre, let alone basilica, over the spot. He wouldn’t have wanted the Michelangelo-carved tomb that history finally imposed, but the relative anonymity of Bologna would have suited him fine. It’s been said that when, due the vagaries of the calendar and the irregular motions of the heavenly spheres Christmas falls on 31 July, St Ignatius’ Feast Day will trump it; when Easter falls on 4 October it must defer to St Francis’ Day; but that St Dom’s Day can be bumped about from year to year, nation to nation, with no complaint from the saint himself…

Instead of selfie-sticks and a concern for limelight, Dominic’s great gift was to inspire and enable other people to come into the light, the light of Christ. Within a generation thousands of men and women from many nations were inspired by him to leave everything and join his motley crew of itinerant preachers and orthodox teachers. In the generations that followed characters as diverse as Peter of Verona, Hyacinth, Raymond of Peñafort, Albert the Great, Thomas Aquinas, Agnes of Montepulciano, John Dominici, Catherine of Siena, Vincent Ferrer, John of Gorkum, Catherine de Ricci, Antoninus of Florence, Fra Angelico, Anthony Mary Neyrot, Rose of Lima, Martin de Porres, Juan Macias,  Pius V, Louis de Montfort, Pier Giorgio Frassati, the Dominican martyrs of Vietnam, the Dominican martyrs of China, the Dominican Martyrs of Japan – the list of his sainted companions is almost endless, let alone the list of not-quite-saintly ones. And his self-effacing nature rubbed off even on some of those greats who had every cause to have big egos: it has often been observed that Thomas Aquinas, for instance, is completely anonymous in his works, revealing almost nothing of himself as he points ever-reliably to the teachings of Christ and His Church; we don’t even know what year he was born and very few people know where he’s buried.

St Dominic’s great gift was his ability to inspire and encourage others to join in his passion, his mission of a new evangelisation for Europe and beyond, and then get out of the way himself. In 1217, before abruptly dispersing his little band of followers two by two all over Europe, he spoke to them on the motives and methods of preaching and urged them to unremitting prayer and study of sacred doctrine. He reminded them too that their primary duty was their own sanctification and the salvation of others. He insisted that they must be humble and thus poor, putting their whole confidence in God alone; only then would they be invincible against evil. Four years later, as he lay dying, he dictated his spiritual testament in which he said: “These, my much loved ones, are the bequests which I leave to you as my sons: have charity among yourselves; hold fast to humility; keep a willing poverty.”  “Humility,” he said, “is so pleasing to God that for her sake He descended to earth and enclosed Himself in a Virgin’s womb, delighting in ‘the humility of His handmaiden’.”

In this age of pride and vanity Dominic calls us again to receive the Word and lend Him our flesh, not with ‘look at me’ selfie-sticks, but assuming like Mary the posture of a humble handmaid of the Lord, open like Dominic to saying a Marian fiat, YES, whatever your will my Lord. St Dominic our father, faithful confessor, humble friar: pray for us!